The New Colors of Solar Energy

The technology of solar energy has progressed dramatically in the last few decades, as it operates with increasing efficiency and at lower costs.

But the matter of how solar panels look remains an obstacle. Most photovoltaic panels are blue or black and cover large portions of buildings with a monotone hue. That might not jibe with your personal taste – or that of your homeowners’ association. It’s a limitation that has hindered the integration of solar energy into some commercial applications. In fact, architects and designers have long requested a wider choice of colors for solar cells to allow them to seamlessly blend into a building’s façade or an electronic system.

Up to now, however, expanding the palette of colors that solar energy engineers can work with has proven notoriously difficult. That could be changing, though, with work from the lab of Andre Taylor, associate professor of chemical & environmental engineering. Researchers there have developed a solar cell that widens the choice of colors without decreasing its power conversion efficiency. Their findings are published in Nano Energy. 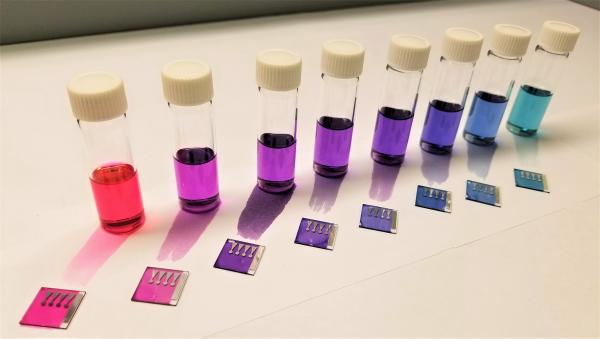 Researchers have previously tried a few methods to vary the colors of solar panels. One approach involved adjusting a layer of the solar cell so that it would reflect different colors – this has proved to be costly and with limited results, however. Another method introduced what’s known as a “dye molecule” to allow for more colors.  This approach, however, diminishes the efficiency at which the system converts sunlight to energy.

The research team in Taylor’s Transformative Materials and Devices Lab also used a dye molecule, but this one doesn’t diminish the power conversion efficiency. Jaemin Kong, a post-doctoral associate and lead author of the paper, explains that this is because the molecule – a squaraine known as ASSQ – acts not only as a color agent, but as an energy transfer donor. It works in conjunction with two polymers – one that serves as an electron donor and the other as a non-fullerene electron acceptor. By changing the ratios of those three elements, the researchers were able to make adjustments that allowed for a gradual color variation from blue-green to purple-red.

“I think that’s a pretty impressive part of this paper – there was no major sacrifice of the power conversion efficiency,” Taylor said. “And the nice thing about this is that the dye can be used at low concentrations, so it doesn’t necessarily affect the overall mechanism.”