The Mystery of the Brownbanded Bamboo Shark

Sharks are splashing across TV screens all week as viewers who love (or fear) the kings of the sea are tuning into shows about the allure (or revulsion) of great whites, hamnmerheads, makos and more.

But if you want to unravel a great shark mystery – and learn why it gives researchers hope about the future of threatened shark populations – turn off your TV and listen to what this UT student helped discover.

Moisés A. Bernal, a Ph.D. candidate at UT’s Marine Science Institute, and a team of researchers found that brownbanded bamboo sharks have a surprising way of producing offspring – a way that gives hope to the future of wild sharks threatened by overfishing and habitat loss. 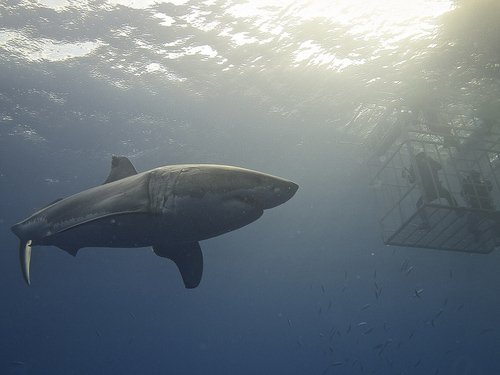 Bernal and the other scientists found that the female brownbanded bamboo sharks can be separated from the male fathers of their pups for an astounding 45 months – nearly four years – and still have a viable baby.

The female sharks are able to produce young regardless of whether or not they are ovulating or when mating occurs, and the discovery affirms the long-suspected (but little-documented) ability to produce offspring even under challenging conditions.

How did scientists unravel the mystery of this unusual shark birth? Watch Moisés A. Bernal, a Ph.D. candidate at UT’s Marine Science Institute, talk about the discovery.

In honor of #SharkWeek, here’s a look at some of the other sharks Longhorns might encounter on the Forty Acres.