The Hidden Inferno Inside Your Laser Pointer

Two UA physicists have discovered that basic concepts such as “hot” or “cold” apply to any system, even those far from equilibrium. Challenging established wisdom, the findings could possibly inform the design of future microelectronic devices and help bring some order around fundamental concepts in thermodynamics.

If you thought that a kid’s room, a Norwegian Nobel Laureate and a laser pointer had nothing in common, two UA physicists are about to enlighten you. 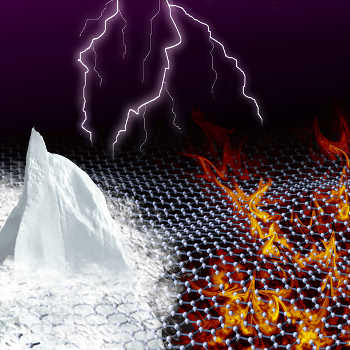 It may come as a surprise that temperature and voltage, basic notions developed in the 19th century, have until now lacked a mathematically rigorous definition, except for the case of an idealized equilibrium that does not actually occur in nature. The results of this study show that the two are intricately linked and could lead to a better understanding of what it means to be ‘hot’ or ‘cold’ at the subatomic and quantum scale. (Image credit: Charles Stafford/Abhay Shastry/UA)

It’s hard to believe, but after having unraveled many of the laws that make the universe tick, physicists still haven’t reached an agreement on whether something as seemingly simple as “hot” or “cold” can be measured in a system under certain circumstances.

“Imagine you threw an iceberg into the sun and right before it’s melted and gone, you wanted to know, ‘How hot is that iceberg at that moment?’ Would that be a meaningful question to ask?” says Charles Stafford, a professor in the Department of Physics in the UA’s College of Science. “According to traditional physics, it wouldn’t be.”

Put simply, traditional knowledge holds that properties such as temperature or voltage can only be measured as long as a system is in equilibrium. (Hint: an iceberg plunging into the sun is not.)

“Temperature and voltage are two basic variables developed in the 19th century,” Stafford says, “so it may come as a shock that such basic notions have until now lacked a mathematically rigorous definition except for the case of equilibrium, an idealized case that does not actually occur in nature, except perhaps for the ‘heat death’ predicted to mark the end of the universe.”

Together with doctoral student Abhay Shastry, the first author of the study, Stafford used mathematical modeling to explore this conundrum. They published their results recently in the journal Physical Review B. Their manuscript shows that these two quantities are so closely linked that it is impossible to know one without knowing the other.

“We have shown that actually any state of a system whatsoever, even far from equilibrium, can be characterized by a temperature,” Stafford says.

This is where the kid’s room comes into play. (We’ll get to the Nobel Laureates and laser pointers in a little bit.)

Everything in the universe — from quarks to galaxies — has an inherent tendency to achieve equilibrium with its surroundings and head toward the greatest possible degree of disorder. In reality, this phenomenon, called entropy and described in the Second Law of Thermodynamics, is a bit more complicated, but let’s not worry about that for now. After all, we know this intuitively: Plop an ice cube into a drink and leave it alone for a while; soon, the water molecules in the ice cube have left their highly ordered crystal structure and settled into a cozy equilibrium, happily mingling with their disorderly, watery brethren. Same goes for the stuff in the kid’s room: Leave things alone for a while without tidying up — you get the idea.

That iceberg about to vaporize when we tossed it into the sun earlier illustrates a system that is very, very far from equilibrium, but let’s look at a more everyday example: an ordinary laser pointer. When you push the button to activate that red dot of light your cat is so crazy about, an inferno breaks loose inside the little device.

“When they’re lasing, the electrons inside the device get hotter than a temperature we call ‘plus infinity,'” Shastry says. “If you heated up a pot of water, no matter how hot, even if you vaporized it at a million degrees, it would still not be as hot as the electrons in the laser.”

Now, it’s important to point out that we’re talking about quantum phenomena here — in this case the electron temperature, which has nothing to do with the temperature of the laser light and is the reason your laser pointer doesn’t vaporize instantly in your hand upon activation.

Nevertheless, if you could somehow how touch the electrons in your laser, it would feel very, very hot, Shastry explains.

The point, according to the two physicists, is that when a laser is lasing, it is very far from equilibrium, much more so than, say, weather phenomena. Unlike the weather, which is driven largely by thermal differences, systems such as semiconductors and electronic devices are driven electrically, which can push their components — in this case, electrons — much farther from equilibrium than heat.

Under the current view, physicists would say that measuring the temperature in such a device that’s far from equilibrium can’t be done. Stafford’s and Shastry’s results say, yes, it can be done, but that conjures another question: Why would one want to?

“Current microelectronics technology is limited by the fact that the devices dissipate a lot of heat, and they’re getting smaller and smaller,” Stafford says. “As they get smaller, they dissipate more heat, so this is creating a big problem for advancing the technology.

“Because we show that it’s possible to define temperatures and voltages even at the subatomic scale, and define it rigorously, one could hope to make devices that are integrated in such a way that one could have local cooling of just one spot on the device where that one transistor sits that is getting really hot, instead of cooling the entire chip. Currently, there is no way to do something like that.”

Stafford and Shastry are currently exploring a possible collaboration with Pramod Reddy, a colleague at the University of Michigan whose lab has set the record in creating a thermometer capable of probing temperature across a few atoms, to subject their findings to experimental study.

Another example to which the work might apply is nuclear magnetic resonance, a technology routinely used in medical imaging.

“Someone who has experienced that might not have realized the atomic nuclei in their body were put into a state of absolute negative temperature, which is hotter than anything in the universe, but that is the case,” Stafford says.

“Our theory is very general. It applies to lots of things, from quark-gluon plasmas generated in particle accelerators to laser pointers to neutron stars,” Shastry says. “They all follow the exact same formalism.”

As a side product of this research, Shastry and Stafford provide the first proof of a version of the Second Law of Thermodynamics formulated in 1931 by Norwegian chemist Lars Onsager, which applies in particular to thermoelectric processes, a feat that had eluded the physics community for 85 years.

“The Second Law of Thermodynamics is the most general of not just the laws of physics, but all the laws of nature,” Stafford says. “And there are many practitioners in this field of quantum physics who are proposing that the second law doesn’t apply to systems that are in a state that’s far from equilibrium, but we show that it does.”

As it turns out, everything has to respect the second law. Including a kid’s room.