The heartbeat of progress

It’s immense, the moment an ultrasound lets an expectant mother hear her unborn child’s heartbeat. But many pregnant women around the world never get to experience it.

In many countries prenatal care is a costly, complicated, uneven endeavor. In Uganda, the government recommends four prenatal visits for pregnant mothers, though women – especially those who live in rural areas – don’t always have the money, time or means to travel to see a doctor at a medical center. They often look to local midwives for help, but midwives don’t always have access to modern medical equipment. 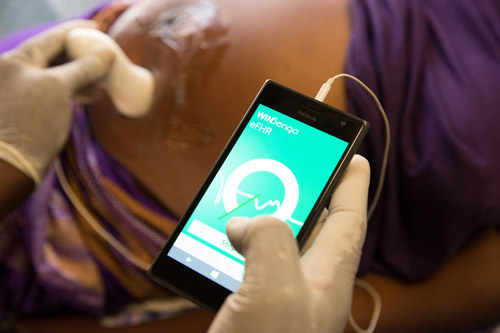 WinSenga is a low-cost, smartphone-based ultrasound alternative that plugs into a mobile phone and is operated using an app. Image by David Palmer

A group of young, African developers recently decided to use technology to take aim at this problem. Their company, Cipher256, created a smartphone-based ultrasound called WinSenga, an affordable fetoscope that plugs into a mobile phone and is operated using an app. In the past, expectant mothers had to imagine what doctors and midwives heard as they listened to their baby’s heartbeat through old-fashioned devices. The WinSenga device lets doctors and midwives more easily monitor the health of a fetus, but it also lets mothers in on the experience, allowing them to have a listen as the gentle whir of their baby’s heart is piped through headphones.

“It’s not just a great way to track the health of the pregnancy and raise awareness if there are problems. It brings peace of mind for the mothers. Mothers always want to hear their baby’s heartbeat,” said Joshua Okello, co-founder and team leader for Cipher256.

“It gives them assurance that the baby is really fine,” added Edmund Ainebyona, general manager for Cipher256. “It also makes them happy.” 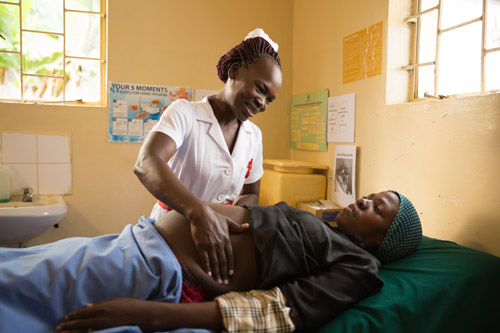 WinSenga got its start a few years ago when the Microsoft Imagine Cup competition inspired then-university students Okello and Aaron Tushabe to use their computer science skills to tackle some of the world’s biggest challenges. They were moved by the plight of mothers who live outside the reach of modern medical care.

In 2013, an estimated 3 million newborn deaths and more than 2 million stillbirths were registered worldwide along with 200,000 maternal deaths, Okello said.

“Guess where the majority of these are recorded? Developing countries. But where exactly? Over 60 percent of those are in Sub-Saharan Africa. If you actually do the math, most of Africa’s 1.2 billion population lives in that particular area,” Okello said.

By improving the experience for expectant mothers, and possibly even the outcome of pregnancies, the team hopes they can “turn over a new leaf” in Africa – and beyond.

“Mothers are actually the cornerstone of every African community I know of. Every statistic shows that healthy mothers in any community means better education levels, better socioeconomic development for the entire community – a better future,” Okello said.

Added Ainebyona: “We ultimately believe WinSenga will be able to cross borders and help other countries facing the same problems.”

Their idea for reinventing the ultrasound won the Microsoft East and Southern African Imagine Cup National Finals in 2012 and went on to land a $50,000 grant at the Social Innovation Summit in Silicon Valley.

In addition to the grant, Microsoft has given the team mentorship, access to software and technical advice all along the way to help them turn their concept into a full-fledged startup. Cipher256 now has several employees and its founders mentor other young technologists. The team is currently working on the third prototype of the WinSenga and the device is being tested by an obstetrician and midwives at a number of clinics in Uganda. Cipher256 is seeking regulatory approval from Ugandan authorities to begin formal clinical trials in 2016.

“The clinical trials are going to feed us a lot of data on the state of the device: how accurate is it compared to standard devices like the fetal Doppler, or also compared to what everyone else is using. That’s the sort of feedback that we need to get,” Okello said. “Ultimately, we want to save lives, both for the unborn child, but also for the mother.”

WinSenga is built on Microsoft technology – the app was created in Visual Studio and is backed by Azure cloud services. WinSenga currently runs on Windows Phone.

“Microsoft has been our best supporter, hands down,” Okello said. “The Imagine Cup opened up a whole new world – it peeled the scales off my eyes and was a springboard to everything else we have done.”

This is what Imagine Cup and our other Microsoft YouthSpark programs are all about, said Ken Ryals, senior director at Microsoft Philanthropies. The Cipher256 team is an example of how broadening access to computing skills can unleash innovation that can make a real difference for society.

“It’s core to our company’s mission of empowering every person and organization on the planet. We feel young people have the passion and ingenuity to positively change the world, and by combining that with computer science skills we can help them achieve amazing things,” Ryals said.

“With so many complex issues facing communities around the world, it gives one hope for the future to know there are visionary, driven young people out there who will imagine and create meaningful solutions.”

Robert Busingye, an obstetrician gynecologist in Uganda, said that in his country, doctors and midwives still widely use the Pinard horn, a fetal stethoscope invented by French obstetrician Dr. Adolphe Pinard in 1895. It still works to place the Pinard horn on a mother’s belly and listen for the baby’s heartbeat – obviously, as it is still used more than 100 years after it was invented. But the effectiveness of the Pinard horn heavily relies on the expertise of the midwife.

“There are some challenges. The midwife needs to be very good to be able to pick their heartbeat. Sometimes it can be confused with the mother’s heartbeat,” said Busingye, who has been helping the WinSenga team test and improve their product. “And when the heartbeat is slow or rapid, she may find it very difficult to count accurately. And since there are standards on what is normal and what is abnormal, she may misclassify for what was abnormal, and then she classifies it as normal, leading to an error.”

Errors mean possibly missing fetal distress, which can ultimately put both the baby and the mother in danger. WinSenga’s sensitivity not only makes it easier to track a heartbeat, but to do so earlier in a pregnancy – at 13 weeks, versus the 22 weeks of gestation it typically takes to be able to hear a heartbeat using the Pinard horn. WinSenga has also proven helpful in the labor ward, allowing doctors and midwives to closely monitor the baby’s heartbeat during the birthing process.

“We have such a huge rate of fetal mortality. We lose a lot of babies in this country, and anything that we can do that would improve the accuracy in being able to detect there’s a problem and act in a timely manner would help the medical profession improve the statistics,” Busingye said. “It is amazing. And, as someone who has been working for quite some time, it reenergizes me to be able to look at the old problems we have and see whether there are newer ways of looking at the same problem and finding a solution to it. Now that we have the younger people, they have some other skills that we may not have acquired in our own life. And, together, we could work towards a better future.”

A better future is exactly where Okello has his sights set.

“As a doctor, I felt I could impact a great number of lives. But, as a developer, I can potentially impact many, many more lives,” he said. “I’m one of those people who believe Africa’s problems aren’t so much political, but a mindset. It’s cheesy, but if you believe, you can achieve.”

Creating a successful startup has been tremendously hard work, and though there are days he struggles just to keep the lights on, and days he definitely feels like giving up, Okello says he believes.

“Whether you believe in God or the universe or science, it doesn’t matter. If you have a talent, I think that you owe it to the rest of humanity to use it to change something,” Okello said. “Just don’t come and consume and then die and go. The best contentment you can ever have is knowing you lived a life that impacted others. Hopefully in a positive way, you know?”