The Gift of Life: How a daughter’s generosity allowed a mother’s love to live on

One of Lois Frane’s last wishes embraced life and hope.

Stricken with terminal breast cancer, just weeks before her death at the age of 62, she allowed doctors to draw her blood and bank it so that someone in the future might benefit from the genetic information encoded in the blood cell DNA.

“We have no way of knowing who could be helped by this,” she told her daughter, Ann Baker Pepe.

That was in 1995. When Pepe discovered a lump in her right breast in 2011 that eventually tested as non-cancerous, her doctors suggested she retrieve her mother’s blood to see if it contained the abnormal mutations on the BRCA1 and BRCA2 genes that are associated with breast cancer. 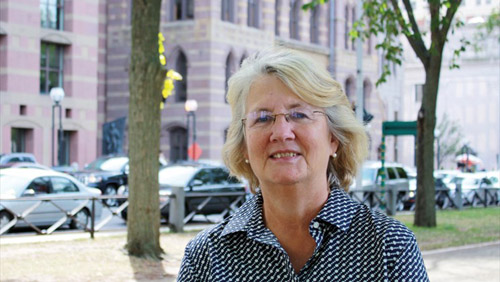 The Gift of Life. Ann Baker Pepe embraced her mother’s attitude about helping others when she and her husband, Greg Pepe, donated to WHRY. Photo credit: Carissa Violante

Testing the blood of an affected family member for the mutations allows for the most accurate available assessment of a relative’s cancer risk. Of those with a harmful BRCA1 mutation, 55-65 percent develop breast cancer by age 70 as opposed to 12 percent of those in the general population. Inheriting a harmful BRCA2 mutation leads to breast cancer in 45 percent of women.

But when Pepe contacted the DNA bank for her mother’s sample, the company could not produce it. Pepe started a class action lawsuit with her husband, attorney Greg Pepe, on behalf of anyone in a similar situation. And in January, the company settled without admitting any wrongdoing.

As part of the settlement agreement, the court allowed a payment to a nonprofit organization. Ann Baker Pepe chose Women’s Health Research at Yale, embracing her mother’s attitude toward helping others.

“My mom was always interested in having an impact,” Pepe said. “That always stuck with me. It’s something really special for me to be able to do that.”

Pepe was no stranger to the concept of giving to an organization. She’s the Director of Development at The Foote School, a private K-9 day school in New Haven.

“I always joked that the reason I’m in this line of work is someday I’m going to win the lottery, and I’m going to really know how to give a gift,” Pepe said. “You would love to be on the other side of the table some time. I feel really happy I got that chance.”

Pepe had attended a WHRY workshop in the early days of the Center and followed its work closely. When faced with her unexpected funding opportunity, she didn’t hesitate to choose WHRY as the beneficiary.

“It’s hard for me to believe that until the 1990s all research was basically being done on men,” Pepe said. “No one realized that was a huge flaw in the whole scientific process. Just a jolting concept.”

Pepe praised WHRY Director Carolyn M. Mazure, Ph.D., for seeing what needed to be done and acting with urgency. Not only to fund needed research on women’s health and sex and gender differences, but to share the findings with the community so the people most affected could benefit.

“I tell this story to everybody I talk to,” Pepe said. “I have faith and confidence in the quality of the work. It’s not just going to end up on a shelf somewhere.”

Pepe believes that like The Foote School, Women’s Health Research at Yale represents what’s best about her adopted hometown.

“I love New Haven,” she said. “Women’s Health Research at Yale is just a really good, important part of New Haven. People thinking in creative ways about the health of the community. And really getting the word out.”

Pepe feels confident that her family’s gift, in the name of her mother and stepfather Alan Frane, will offer the next generation new hope for better health.

“I don’t know who, I don’t know exactly how,” Pepe said. “But getting that research done and out there so people can act on it will have an impact on somebody’s life. And maybe many, many lives.”