The Female Romantic poets who used opium for its “tranquilising power”

Opium use by Samuel Taylor Coleridge is said to have inspired the fantastical Asiatic landscape in his epic poem Kubla Khan. Thomas De Quincy described his drug-induced visions in Confessions of an English Opium Eater.

In the Romantic period, a generation of women writers including Elizabeth Barrett Browning, Dorothy Wordsworth and George Eliot were also habitual users of opium, and wrote extolling its “calming” properties in their writing, research by Dr Joseph Crawford, of the University of Exeter University, has found.

Many women writers turned to the drug to help them with restlessness, anxiety and insomnia.  Some, including Samuel Taylor Coleridge’s daughter, Sara, became addicts. 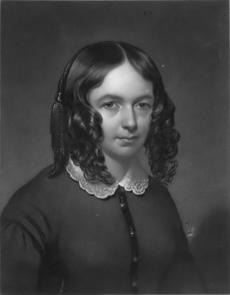 A generation of women writers, including Elizabeth Barrett Browning, were habitual users of opium, and wrote extolling its “calming” properties in their writing, new research shows. Image credit: Wikipedia

The poet, Elizabeth Barrett Browning became so dependent on the drug that her brother attempted, unsuccessfully, to wean her off it. In letters to Robert Browning she described it as a “calming remedy” and praised its “wonderful …tranquilising power.”

She spent almost her entire personal income on opium and became “restless and upset” when her chemists failed to supply her with sufficiently strong preparations.

Until 1868, there were no restrictions on the purchase of opium which was readily available, even in small villages.  By 1838, Britain was importing over 130,000 pounds of opium for domestic consumption.

In a chapter entitled, Opium and Gender in Romantic Literature, for a forthcoming book on Psychopharmacology in British Literature, Dr Crawford describes how literary figures including Coleridge and De Quincy took the drug as a stimulant and to seek inspiration, but women often took it to alleviate the drudgery and hardships of everyday life, including anxiety and insomnia.

Coleridge’s daughter Sara habitually used opium as a painkiller and sedative, and gradually became dependent upon it, Dr Crawford describes in a chapter Opium and Gender in Romantic Literature, for a forthcoming book on Psychopharmacology in British Literature

She described her opium usage in the poem “Poppies.”

That liquor soon can close her eyes and slumber soon produce.

O then my sweet, my happy boy will thank the poppy-flower which rings the sleep to dear mama at midnight’s darksome hour.”

Many other women writers published works about their experiences of opium usage.  Anna Seward’s poem “to the poppy” and Mary Robinson’s “Ode to Apathy” were inspired by opiates.

“Female writers used opium, not as a stimulant but as a relaxant which helped them cope with the demands imposed by the very world of mundane domesticity which male opium-eaters used the drug to escape,” Dr Crawford said. “For all these women, opium formed part of ordinary domestic life, used to manage pain, illness and distress, and valued for its power to sedate and tranquilise rather than for its stimulant properties or its ability to induce dreams and visions.”