The Black tents that defied a nation

A beach umbrella and a tent formed an unlikely Embassy, pitched on the lawns of the Australian Parliament on Australia Day 1972, by four Aboriginal activists. The Aboriginal Embassy was an ingenious response following a poorly-timed policy statement in which a conservative Prime Minister rejected Aboriginal land rights.

According to the demonstrators PM McMahon’s provocative statement, on the national holiday regarded by them as Invasion Day, effectively rendered them aliens in their own country. They decided that just as many overseas countries had their own Embassy in Australia, so should they. Over the following months the Embassy swelled into one of the largest and most significant political demonstrations in Australian history. The canvas protest scored a diplomatic coup, captured widespread media attention, and raised international awareness of the struggle for land rights and improvement of living conditions for Aboriginal people across Australia. 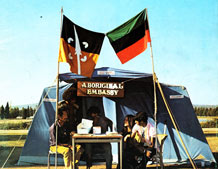 This captivating story is the subject of a new book ‘The Aboriginal Tent Embassy: Sovereignty, Black Power, Land Rights and the State’. The book is the first to be published that brings together all elements of the demonstration, including photographs, hard-to-find writings and interviews with key players in the Embassy. These illustrate the protesters depth of conviction and canny approach to making themselves seen and heard.

A public debate about the book and the Tent Embassy will take place on 25 September at Senate House, London. The Aboriginal political activist and historian Dr Gary Foley, a key player in the 1972 Embassy demonstration is one of the editors, alongside Dr Andrew Schaap a political theorist at the University of Exeter and Dr Edwina Howell an anthropologist and solicitor, who works with Dr Foley at Victoria University, Melbourne.

Dr Foley said: “What began as a simple response to a Prime Ministerial statement on Australia Day 1972, evolved into a six-month political stand-off between radical Aboriginal activists and a conservative Australian government.”

The increasing number of tents pitched on the lawns in Canberra made the government look foolish; as the ability to protest in this way was due to a loophole in the law, preventing officials from removing them. This form of creative and peaceful demonstration appealed to a wide section of the Australian public. Dr Edwina Howell’s chapter describes how the Embassy used performance to good effect to stage a political encounter with the state:  in snubbing the authorities, the Embassy translated well to a section of black and white Australians, making a mockery of authority and pomposity. The government subsequently changed the law and what followed were dramatic scenes when the police forcibly removed the Embassy in July 1972. The violence was captured by the media on film and was transmitted around the world.

Dr Foley commented:“The demonstration increased international awareness of the struggle for Aboriginal justice and brought an end to the national government policy of assimilation and put Aboriginal issues firmly onto the national political agenda.”

Although their demands were consistent with those articulated by Aboriginal people since the beginning of colonisation, the younger generation of Aboriginal activists associated with the Tent Embassy had a harder, more vocal and radical approach in demonstrating their demands and grievances than previous generations. This was in part because of the 1970s Black Power movement in America, whose iconic style and militancy both influenced and energised the marginalised young Aboriginal people who had recently migrated from reserves to cities like Melbourne, Sydney and Brisbane.

Sam Watson, an Aboriginal activist and member of the Black Panther Party in Brisbane, was called to speak at an Embassy rally at the time. He said:” I went down, I saw the tents, I saw the embassy sign and I saw the national parliament across the road. I knew that I had to be there. I knew that the heart and soul of our struggle had become centred in that place. I was there until July when the cops moved in and smashed us. We came back and we kept coming back. Our struggle will go on, but the importance of the Embassy to the emerging class of new, younger and more militant activists – can never be truly measured.”

In a stand-off between thousands of protestors and police on a third occasion in July 1972, demonstrators eventually allowed police to remove the Embassy claiming a moral victory for the movement. However, the Embassy was back again in 1973, just months after the election of a new Labour government.

Today more than 40 years later the Embassy is still in existence on the Parliamentary lawns, a constant symbol in the Australian democratic landscape.

Dr Schaap’s research in political theory examines the significance of this symbolism. He commented: “As a sprawling encampment that resembles the impoverished conditions in which many Aboriginal people still live, the Embassy is a reminder of the alienation and dispossession of Aboriginal people. On the other hand, in claiming to represent a sovereign people and flying the Aboriginal flag, the Embassy demonstrates resistance, survival and self-determination.”

Michael Anderson, the only surviving man of the four demonstrators who established the Aboriginal Embassy with a beach umbrella recently reflected that the Embassy ‘can be regarded as the longest running political demonstration in the world … I was invited to address Occupy London, and the Aboriginal Tent Embassy was described as one of the first Occupations in the world. Now, with the Occupy movement, there are tent gatherings everywhere’.

Dr Gary Foley believes that the Embassy remains a focal point, demonstrating the intensity it can still provoke. He said: “If, as some suggest, the Embassy can only ever be removed by Aboriginal people achieving their goals of Land Rights, Self-Determination and economic independence then it is likely to remain for some time yet.”

The 1972 Embassy protesters were demanding Aboriginal rights to land, economic independence and the protection of a distinct Aboriginal cultural identity.  The demand for land rights stretched back a long way. As Prof John Maynard, discusses in his contribution to the book, following the initial wave of dispossession in New South Wales, some Aboriginal people had prospered with their own farms and businesses by the early twentieth century. However, subsequent governments further marginalised Aboriginal people, confiscating their property and moving many into reservations and missions where their social and working lives were monitored and restricted. This included the removal of Aboriginal children from their families, as part of a policy of assimilating them into a dominant Australian culture

The book draws together contributions from activists and Aboriginal academics, some of whom were participants in the events they write about. Many of the primary sources are drawn from The Foley Collection (housed by Victoria University, Melbourne) – the most comprehensive archive on the Aboriginal movement built up by Dr Foley over 40 years. The book is a genuine collaboration, which examines the social, historical and political significance of the Aboriginal Tent Embassy for Australian society and for the struggle for indigenous rights internationally.

Political theorist, Dr Andrew Schaap said: ”editing the book with legendary Aboriginal activist Gary Foley and Edwina Howell and talking with many other remarkable activists who participated in the project has transformed the way I think about politics. This book is the first of its kind, in drawing together scholarly reflections about the Embassy alongside more immediate accounts by key activists, journalists, politicians and officials. By focusing on the Embassy, the book provides a window through which non-Aboriginal people can more clearly see the politics of race in Australia today.”

The book launch and public debate will be in London on 25 September, at the Human Rights Consortium of the School of Advanced Study, University of London, involving a roundtable discussion with veteran Tent Ambassador Sam Watson, academic and journalist, Germaine Greer, and Emeritus Professor Chris Mullard. The symposium will also include presentations from contributors to the book: Aboriginal historian Professor Maynard, Dr Schaap and Dr Howell. The event is co-hosted the by Institute of Commonwealth Studies and SOAS. It is supported by the Arts and Humanities Research Council and will include a film screening and photographic exhibition.