Texas May Be Feeding its Red Drum Fish More Than They Need, Say Researchers

Austin, TEXAS — It’s not the chicken or the egg, but marine scientists at The University of Texas at Austin have answered a basic question about red drum fish and their eggs that may eventually help save the state of Texas a lot of money in hatcheries management and make fish farming more environmentally friendly.

Every year the Texas Parks & Wildlife Department spends millions of dollars breeding red drum, a popular game fish, releasing between 20 and 30 million hatchery-raised fingerlings into eight different bays and estuaries along the coast. In order to maximize the numbers that survive to adulthood, the practice has been to provide adult fish a diet rich in fatty acids for nine months before breeding season. During breeding season, in order to save money and resources, the diet is less rich.

“The assumption was that over those nine months the fish would accumulate stores of fatty acids in their bodies and would then transfer them to the eggs, which would produce more vigorous spawn,” said Lee Fuiman, Perry R. Bass Chair in Fisheries and Mariculture in the College of Natural Sciences. “Then you can cut back during breeding season because it doesn’t matter at that point. The problem was that we didn’t have solid experimental evidence to show that that was true.” 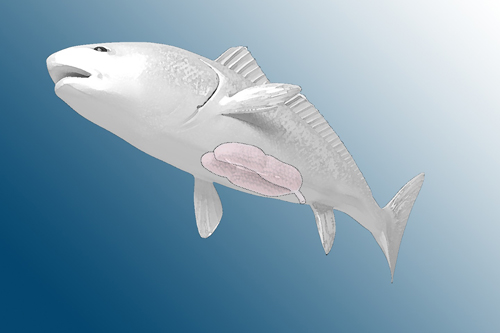 Fuiman, who consults with Parks & Wildlife on their aquaculture programs, said that fish tend to fall into two categories in how they transfer resources to their eggs. “Capital” breeders accumulate and store most of the nutrients they’ll transfer to their eggs over a long period. For “income” breeders it’s food they’re eating just before and during the time they’re spawning that is responsible for most of the eggs’ nutrient content.

In order to assess where the red drum falls on this spectrum, Fuiman and Cynthia Faulk, his colleague at the University of Texas Marine Science Institute in Port Aransas, ran experiments in which they varied the content of one particular fatty acid in the diets of red drum while they were in the midst of spawning. Then they tested the levels of that fatty acid in the eggs that were spawned during the next few weeks.

“We know from past research that this is one of the essential fatty acids which is important to the eventual ability of the young to escape predators,” said Fuiman. “We also know that the fish has to get most of it from its diet. So we wanted to see what happens if we varied the diets in the period immediately before spawning.”

If the red drum were capital breeders, such short-term changes in diet shouldn’t have mattered much. What Fuiman and Faulk saw, however, were quick and dramatic shifts in the fatty acid content of the eggs. Within as little as two days of the diet shift, the eggs were showing changes in fatty acid content. And those changes were considerable, with up to threefold increases and decreases in concentration. The findings were published this month in Biology Letters.

What this meant was that it was the immediate diet that mattered much more than what the fish had been eating in the months leading up to breeding season. Fuiman cautioned that the test was for only one of the 14 fatty acids that are considered essential to egg success. It may be the case that red drum are income breeders with respect to some nutrients and capital breeders with respect to others.

He and his colleagues are in the process of conducting experiments on some of the other fatty acids. They’re also planning to conduct yearlong tests in which they flip the feeding schedule that state officials have been using.

“So eight or nine months of the thinner diet, and then three or four months of the richer diet, just before and during breeding season,” he said. “If that schedule is successful, we could make a really important change to how these fish are managed. The state releases millions of young red drum into the wild every year to supplement the natural population. The vast majority are going to be eaten by other fish, but if a more strategic diet can lead to even a small improvement in the fatty acid content of the eggs, you’d save resources, and you might end up with a better survival rate.”

Fuiman said that understanding the dynamics of nutrient transfer can also have major implications for understanding red drum migratory patterns and the likely effects of pollution and climate change on its reproductive cycle.

“So this is very practical research, but it’s also the most basic kind of ecological science. We want to understand better how this species lives.”