Antibiotic-resistant bacteria are an important concern for disease prevention in the future. UA doctoral candidate Victoria Obergh is testing Tucson-area wastewater systems to find out where these bacteria can be found.

In the lab, Victoria Obergh transfers bacterial DNA samples into a tray. A graduate student in the University of Arizona’s Department of Soil, Water and Environmental Science, part of the College of Agriculture and Life Sciences, Obergh works with the samples under a sterile hood sporting an ultraviolet light to kill any unwanted DNA.

Obergh is assisting on a project led by Jean McLain, an associate research scientist and associate director of the UA’s Water Resources Research Center, with the help of associate professor Channah Rock and other graduate students. The team tests for the presence or absence of antibiotic resistance bacterial genes in wastewater. 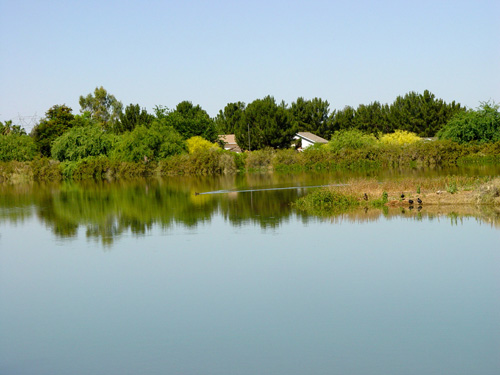 Jean McLain and Channah Rock conducted much of their antibiotic resistance research on water and sediment samples collected at Gilbert Riparian Preserve near Phoenix. (Photo by Jean McLain)

In McLain’s lab are test tubes. One is cloudy, which she says means it contains antibiotic-resistant bacteria.

She’s been finding a lot of that in local water sources. But what exactly does this mean? 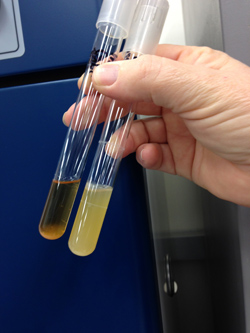 The test tube with foggy liquid indicates the presence of antibiotic-resistant bacteria. (Photo by Haley Anderson)

McLain focuses on testing bacteria in reclaimed water – former wastewater that is treated for removal of solids and impurities and often used for groundwater recharge and irrigation.

The effects of antibiotic resistance have been in the news. A big one is methicillin-resistant Staphylococcus aureus, or MRSA. It causes painful skin boils and staph infections in humans. There are treatments but MRSA is resistant to numerous antibiotics.

McLain and Rock test for bacteria like this that are resistant to antibiotics used in hospitals and clinics right now. Bacteria can develop resistance to antibiotics in multiple ways. Those resistance genes can then be passed to next generations through the bacteria’s DNA.

“One of the current questions is that if we have people who are exposed to recycled water, and if these genes are present, does that create an increased health risk,” Rock said.

Globally, resistance to antibiotics is reducing the effectiveness of treatments for disease in some cases, according to the U.S. Environmental Protection Agency and other agencies concerned with public health and environmental sustainability.

McLain’s research began at a wetland created using the treated outflow from a wastewater treatment plant in Gilbert, Arizona, just southeast of Phoenix. Gilbert has been using reclaimed water for 30 years now.

McLain recalled thinking about the ponds containing reclaimed water and how “if we were going to find increases in antibiotic-resistance, we think it would be here, after 30 years of exposure to wastewater.”

For a comparison with the wastewater, McLain chose a pond at the nearby UA Maricopa Agricultural Center as a control site because that water and surrounding soil had never been exposed to reclaimed water.

“The best control site would be a site somewhere where the soils, if I’m working with soils, had never been impacted by human beings,” McLain said. “But the problem is that there’s really no such thing.” 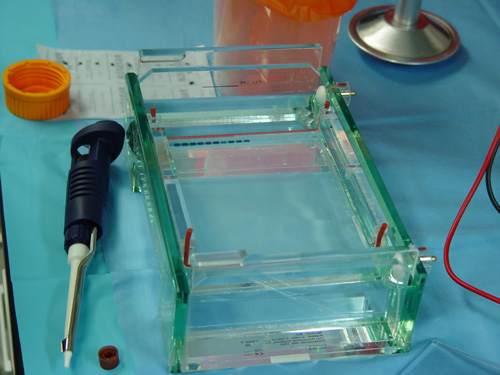 Using equipment such as this gel apparatus, researchers can use electrical currents to separate and identify bacterial antibiotic resistance genes. (Photo by Jean McLain)

After taking samples from the water and soils of both ponds, the researchers extract the DNA from the bacteria and use a biochemical process called polymerase chain reaction, or PCR, to replicate the target gene or segment of DNA. Having more of the material makes it easier to test for the presence of the antibiotic resistance genes. 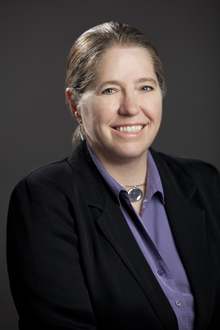 Jean McLain is an associate research scientist in the Deparrtment of Soil, Water and Environmental Science and associate director of the UA’s Water Resources Research Center. (Photo by Jake Johnson)

Another testing method consists of taking bacteria from the treated wastewater samples and exposing them to specific levels of antibiotics. If the bacteria still grow in response to a specific concentration of antibiotic, they are considered antibiotic resistant.

The researchers expected to see higher levels of antibiotic-resistant bacteria in the recycled water pond than in the control pond that had never been exposed to reclaimed water.

“That wasn’t the case,” Rock said. “The bacteria were found in both places. They were the same or they were less (prevalent) in the recycled water pond than they were in the other (control pond).”

This illustrates a confounding factor in the study of antibiotic resistance: It is a natural phenomenon that has existed for many millennia. Many of today’s commonly used antibiotics were originally isolated from soil bacteria. Thus, separating “natural” resistance from any increases that may occur due to treated wastewater application is a difficult and tedious process.

In another study in Arizona, it was found that treated water leaving the wastewater treatment plant contained no antibiotic-resistant bacteria, but after traveling many miles through the pipelines, the antibiotic resistance reappeared. At the end of the distribution system, researchers found roughly 100 antibiotic-resistant genes per a little less than half a cup of water. This suggests some regrowth of antibiotic resistance may have occurred in the pipeline.

There are currently no published studies on whether these antibiotic-resistant bacteria are present in our drinking water systems but researchers are beginning to test this, McLain said. Additionally, it’s unknown whether that would present a human health risk.

Antibiotic resistance is found in nature and antibiotic-resistant bacteria also are found in soils, not just water.

“So it wouldn’t be uncommon to find those same things in different types of water systems,” Rock said.