COLUMBIA, Mo. – On the outside, Novashine looks like an ordinary teeth-whitening kit that consumers use every day. However, the kit, developed by a team of University of Missouri engineers, uses a specialized teeth-whitening gel specially made for ease of use that capitalizes on technology users probably already have on hand—the user’s smartphone.

“Currently, teeth-whitening kits that are on the market may cause user sensitivity; therefore, we wanted to create a product that was easy to use, safe and had fewer harmful effects,” said David Anderson, a scientist of Nanova and a graduate of Mizzou. “Novashine, is registered with the FDA, and our teeth-whitening gel produces less sensitivity and better whitening performance than whitening strips and other products that are currently on the market.” 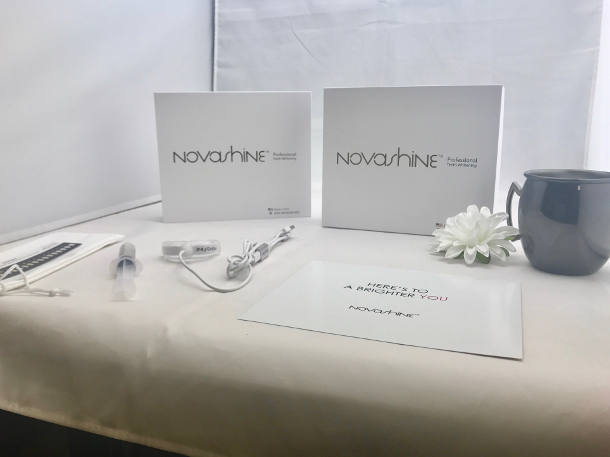 Nanova highlights the university’s impact on the state’s economic development efforts, including commercialization of research conducted at Mizzou, workforce development and job growth, quality of life improvements for residents while attracting corporations and businesses to the state. Image credit: University of Missouri

Users apply the gel, which is generally safe for enamel, to a mouthpiece with cool light, which can be plugged into a phone, computer or USB port to power the safe and effective LED lights. Applications can be repeated daily until the desired whiteness is attained.

“Nanova was founded in 2007 by a group of four researchers—two of whom are from the University of Missouri—to focus on nanotechnology research and manufacture dental consumables” said Hao Li, professor of mechanical and aerospace engineering in the MU College of Engineering and president of Nanova. “Our mission is to improve our products beyond industry standards; our Novashine product is the latest addition to our product line. We feel it’s a solid product that is both safe and effective.”

Nanova highlights the university’s impact on the state’s economic development efforts, including commercialization of research conducted at Mizzou, workforce development and job growth, quality of life improvements for residents while attracting corporations and businesses to the state. During the past five years, companies commercializing MU technologies have secured hundreds of millions of dollars in investments and grants to advance their commercialization efforts. In 2016, the Office of Technology Management and Industry Relations reported that Mizzou received $14.9 million in revenue from more than 40 technology licenses.