*A student team from Russia will take technology that is already monitoring the health of a national park to the Imagine Cup Worldwide Finals in July.*

REDMOND, Wash. — Two months ago, fish started dying in the rivers and streams of Russia’s Zyratkyl National Park. Perplexed park officials wanted to know why, so they turned to a new water monitoring system called Polarvision.

To deploy the system, Russian officials reached out to its creators – Team NLO, a group of South Ural State University students who had developed Polarvision for this year’s Imagine Cup, the world’s largest student technology competition. 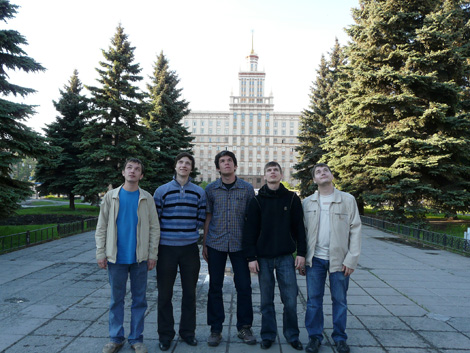 About the image above: Team NLO from Russia hopes to help governments around the world monitor water quality cheaply and effectively. Image credit: Microsoft

More than a month before their brainchild will be judged against other college projects in the Microsoft-sponsored worldwide Imagine Cup finals, Team NLO hiked out to the national park and installed a working version of its Polarvision monitor in a polluted part of the park. That monitor is currently collecting and analyzing the park’s water data for oil and other contaminants to pinpoint the pollution problem.

Part of a growing trend in Imagine Cup competition, Team NLO and other teams entered into this year’s competition have projects that are already helping solve problems around the world. For its part, Team NLO hopes it can use a win at the Image Cup as a springboard for taking Polarvision beyond Russia’s borders and helping cities and governments around the world cheaply and effectively monitor water quality. “We really think it can help solve this problem that affects mankind everywhere,” says Timur Sharaftinov, the team’s captain.

The students will make their case before Imagine Cup judges July 3-8 during the finals in Warsaw, Poland. Team NLO will be among the 400 finalists competing for the top prize. Some 325,000 college and high school students initially registered for the Imagine Cup in more than 100 countries. To get to Poland, finalists had to beat out their rivals in regional and national competitions around the world over the past few months.

Microsoft sponsors the Imagine Cup to inspire the best and brightest students to use technology to change the world, says Jon Perera, general manager of Education Strategy. “We deeply believe that tomorrow’s innovators will come from the dorm room, not the boardroom,” Perera says. “This generation has grown up in a digital world. They’ll be innovating like crazy.”

Microsoft also believes that student innovations can be a key factor in solving challenges facing the planet, he says. The teams aim to use technology and their creative ideas to solve some of the world’s toughest social problems as outlined in the United Nations’ Millennium Development Goals. Perera notes that participation in the Imagine Cup skyrocketed in 2005, when the competition started to pivot on the Millennium Development Goals.

“For developers, it’s a good theme,” Team NLO’s Sharaftinov says. “There will be a lot of projects at the Imagine Cup, and maybe two or three will really help mankind.”

Team Savant, whose members hail from Instituto Tecnológico de Acapulco and Universidad del Valle de México, hopes its project has a broad impact. The students created an application for social networks to promote widespread development of Artemisia annua, a plant with properties that could help combat malaria and other diseases. 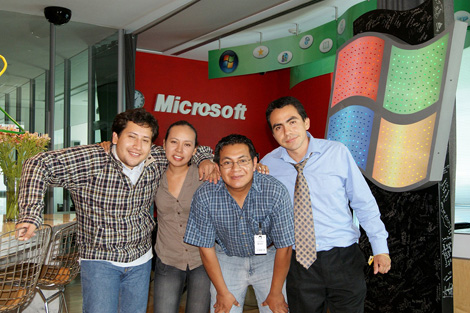 About the image above: Mexico’s Team Savant created a social networking app to promote widespread development of Artemisia annua, a plant with properties that could help combat malaria and other diseases. Image credit: Microsoft

“The Imagine Cup is the most important competition in the world,” says Team Savant’s Edgar Hernandez. “If you love technology, this is the place to show your passion and do something good for the planet.”

Like other teams in the competition, Team Savant’s exercise isn’t academic: To be competitive, students are expected to produce market-ready solutions. “This is a classic startup model,” Perera says. “It has to be solving a hard problem, it has to be unique, it has to be compelling, and it has to survive on its own.” That means competitors need to think critically about how to bring their solution to users and how to partner with governments, non-profits, and companies.

Team NLO, which has worked on Polarvision for a year, is already collaborating with their university’s chemistry department to deploy the system in rivers and lakes around Russia, and the World Wildlife Fund has expressed interest in Polarvision. “Now the Imagine Cup gives us the opportunity to find an investor and produce this on an industrial scale,” Sharaftinov says.

Mexico’s Team Savant developed a business model that allows people and companies around the world to collaborate through social networks to promote the development of Artemisia annua. They first plan to create awareness of the plant’s disease-fighting potential through a social-networking game, where users will learn how to take care of a virtual plant. Once they hit a million users, they will seek out sponsors to rent greenhouses around the world to grow the plant. For businesses, this is an opportunity to connect with potential customers who care about global health issues. “No companies are using social networks to make social responsibility,” Hernandez says. “That’s what we want to contribute.”

Perera called the Imagine Cup a launching pad for innovation. Last year, one of his favorite apps came from Bulgaria, whose team created a Microsoft MultiPoint application to help bring technology into the classroom. The government of Romania invested in the team and is now using it in real life. “Again and again, competitors are taking their solutions and landing them in the market,” Perera says. That’s something the Imagine Cup wants students understand, says Rob Miles, the Software Design competition captain. “The tools are out there now that if you have a great idea, building it is not difficult anymore,” Miles says. “Deploying it worldwide isn’t, either. The Imagine Cup just takes all kinds of lids off.”

Miles, a professor of computer science based in the U.K., has worked with the Imagine Cup since its inception. He said the experience is invaluable for all the students at the competition.

“For me, the big winners of this aren’t the six teams that make it to the big final or the ones who make it to Poland,” Miles said. “It’s everybody who got engaged at every level. They have the experience of building something and showing it to someone else. That’s something you’ll have to do in real life if you want to succeed in this business. It’s just as valuable to the students who don’t win.”

Miles had a few words of advice for the teams preparing for the upcoming finals in Poland. “Remember, it’s supposed to be fun,” he says. “All it does, really, is change your life.”