TB-causing bacteria appear to mask their identity to avoid recognition by infection-killing cells in the upper airways. The bacteria call up more permissive white blood cells in the deeper regions of the lungs and hitch a ride inside them to get into the host’s body.

These findings are reported Dec. 16 in the advanced online edition of the journal Nature. The research was a collaboration between the University of Washington and the Seattle Biomedical Research Institute.

Dr. Lalita Ramakrishan, who studies how TB evades the body’s immune system and manipulates the body’s defenses for its own ends, is the senior author. She is a UW professor of microbiology, medicine and immunology. The lead author is C.J. Cambier of the UW Department of Immunology. 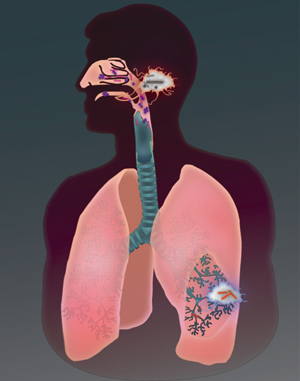 Ramakrishnan noted that the recent study suggests an explanation for the longstanding observation that tuberculosis infections begin in the comparatively sterile lower lungs. In the upper respiratory tract, resident microbes and inhaled microbes of a variety of species signal their presence.

These tip-offs alert and attract many infection-fighting cells to the upper airways. The presence of other microbes in the upper airway may thereby help to keep TB infections at bay by creating a hostile environment.

Their presence may explain why TB is less contagious than diseases caused by several other respiratory pathogens.

To produce an illness, TB bacteria must sneak through this well-patrolled area and head for parts of the lungs where fewer microbiocidal cells are policing.

Like most other bacteria, TB pathogens have telltale molecular patterns that should activate an immune response. However, TB pathogens have evolved mechanisms to circumvent tripping the alarm. Almost like home intruders wearing a stocking over their faces, the TB pathogens produce particular types of fatty substances, or lipids, on their cell surfaces.

These lipids, abbreviated as PDIM, are already known to be associated with bacterial virulence. The researchers showed that PDIM lipids function by masking the underlying molecular patterns that would reveal their dangerous nature to infection-fighting cells.

At the same time, a related lipid – called PGL – on the bacterium’s cell surface promotes the recruitment of clean-up cells that engulf but don’t kill the TB pathogens. Instead, they take them across the lung lining, deep into the lung tissue where the bacteria can establish an infection.

The TB pathogens then use the other lipid molecule, PGL, to co-opt a host chemical pathway that triggers the recruitment of the permissive macrophages.

The present study expands on earlier work in the Ramakrishan and collaborative labs, which helped describe the strategies by which TB pathogens manipulate host pathways for their own purposes after they enter certain host cells.

These include the secretion of proteins that expand the niche for TB by recruiting macrophages to the early lung tubercles characteristic of the disease. The present study describes earlier stages in infection, when the pathogens first come in contact with their potential host at the surface of the lung lining.

“The current study suggests the manner in which the TB pathogens manipulate recruitment of the first responding macrophages to gain access to their preferred niche,” the researchers noted.

“The choreographed entry involves two related TB cell lipids acting in concert to avoid one host pathway while inducing another,” they wrote. The findings link the previously known, absolutely essential virulence factor on the surface of TB cells, PDIM, to the evasion of immune cell detection. On the other hand, PGL is not required on the surface of TB cells for them to infect the body.

Ramakrishnan noted that globally, a lot of samples of TB taken from infected patients do not have PGL. “However,” she and her research team noted, “the importance of PGL in mediating TB virulence or transmission is underscored by its presence in many of the W-Beijing strains” of TB which are starting to appear in more patient samples, and which have predominated in outbreaks in North America.

Ramakrishnan explains that their findings suggest how PGL may be important in increasing TB’s infectivity.

“The presence of PGL in ancestral strains of TB suggest it played an integral role in the evolution of TB infectivity,” the researchers noted. “TB is an ancient disease and the enhanced infectivity conferred by PGL may have been essential for most of its history before human crowding, with its increased opportunity for transmission, made it dispensable.”

The study findings, and previous work on TB, might also explain why smaller droplets of TB are more infectious than larger ones. Only the smaller droplets can make their way down into the lower airways. All it takes is 3 or fewer TB mycobacteria with PGL-producing ability to enter the lower lungs and start an infection.