COLUMBIA, Mo. — Heart disease is a leading cause of death throughout the world. Doctors say that it is important to detect heart disease early before it becomes too serious. Now, researchers at the University of Missouri have found a way that they believe could help detect heart disease before it progresses too far as well as identify patients who are at risk for strokes.

In a study published in Medicine and Science in Sports and Exercise, Isabelle Masseau, an assistant teaching professor in the MU College of Veterinary Medicine, found that she could use targeted micro-bubbles to detect artery inflammation in pigs. She says that this procedure may help detect patients with heart disease or who are at risk for strokes before those ailments become too serious by monitoring artery inflammation, as that is an early warning sign of health problems. She says this procedure may also help monitor the effectiveness of artery inflammation treatments. 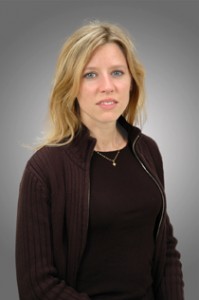 Isabelle Masseau is an assistant teaching professor in the MU College of Veterinary Medicine. Image credit: University of Missouri

“It can be very difficult to detect early signs of heart disease, especially without the use of invasive procedures,” Masseau said. “Doctors often have to wait until serious symptoms occur, such as chest pain or heart attacks, before they are aware of a problem, and many times that is too late. Targeted micro-bubbles have the potential to be able to detect early signs of heart disease very non-invasively.”

Early signs of heart disease include inflammation on the insides of arteries, which leads to plaque buildup that could eventually result in heart attacks. Masseau was able to attach specific antibodies to tiny bubbles and then inject those bubbles into pigs with heart disease. The antibodies were able to seek out the inflammation in the pigs’ arteries and attach themselves, along with the micro-bubbles, to the inflammatory sites. Then, using an ultrasound machine, Masseau was able to detect the targeted micro-bubbles that had gathered in the arteries of pigs. She says this is the first time the procedure has been successful in large animals.

“Because this procedure was successful in pigs, it also could potentially be reproduced in humans as well,” Masseau said. “While it would still be a few years away, injecting targeted micro-bubbles into a human and then scanning them with an ultrasound would be a very simple procedure and could potentially help save lives.”

Another part of Masseau’s research involved studying pigs to observe the effects exercise has on artery inflammation. Before Masseau detected inflammation in the pigs using the targeted micro-bubbles, she submitted them to cardio exercise and measured its effect. Surprisingly, the exercise did not have any effect on reducing the arterial inflammation; however Masseau says that this does not mean that exercise is not important for heart health.

The early-stage results of this research are promising. If additional studies, including animal studies, are successful within the next few years, MU officials will request authority from the federal government to begin human trials. After this status has been granted, researchers may conduct human clinical trials with the hope of developing new treatments for heart disease.