The hardest thing about concrete just might be the problem of how to make the ubiquitous building material in an environmentally friendly manner. Recent laboratory results at Princeton University indicate that the challenge of making greener concrete may eventually be cracked.

Concrete raises climate-change concerns because manufacturing its primary component, Portland cement, is responsible for as much as 8 percent of human carbon dioxide emissions. Even worse from an environmental standpoint, forecasters predict Portland cement production will double over the next 30 years.

There are possible replacements for Portland cement. One option, called alkali-activated materials, promises to perform the same function and cut cement-related carbon emissions by up to 90 percent. Studies have shown that alkali-activated materials are as strong as Portland cement. But there is relatively little long-term data about the greener cement’s durability — a key question for someone building a structure to last decades or more. 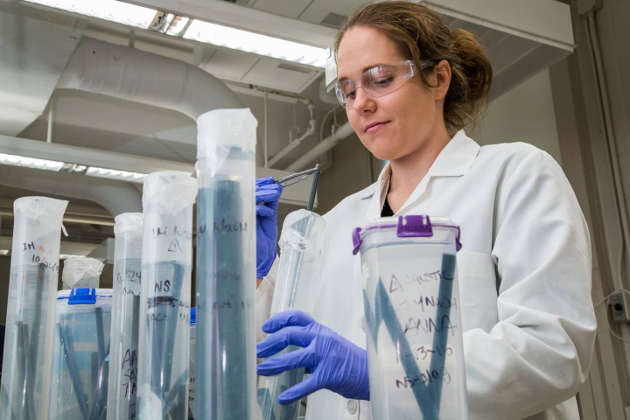 Researchers at Princeton and other institutions have been working to address the lack of information about the new cement replacements. Claire White, an assistant professor of civil and environmental engineering and the Andlinger Center for Energy and the Environment, said it can be challenging in the lab to simulate accurately the long-term durability of concrete. But the information is critical if industry is to adopt the material.

“One of the reasons that alkali-activated materials are not widely used is a lack of testing standards at a national level,” White said.

In recent years, White’s research group has used different methods to both measure the long-term durability of cement alternatives and propose ways to eliminate materials’ weaknesses. In one report, her team looked at tiny cracks that develop as some alkali-activated materials age; because the cracks can markedly decrease strength over time, the researchers proposed adding small amounts of zinc oxide nanoparticles to reduce the cracking.

“We have been using and studying Portland cements for almost 200 years, so we understand a lot about how they deteriorate over time and under different environmental conditions,” said Maria Juenger, a professor in the department of civil, architectural and environmental engineering at the University of Texas-Austin. On the other hand, Juenger said, “alkali-activated materials are a new beast, and we need to put a lot of effort into studying their durability before using them in structures [because] unpredicted failures could be costly.”

In an article published June 15 in the Journal of the American Ceramic Society, White’s research team describes a novel approach to evaluate the alkali-activated material’s permeability. Permeability is a critical weakness for any cement because chemicals such as carbon dioxide, sulfates or chloride that intrude into a concrete structure can weaken the concrete as well as corrode the steel used as a reinforcement for most modern buildings.

Permeability is an important measure of a cement’s durability, but it is very hard to measure accurately in a lab, White explained. That is because the most common methods of testing permeability require researchers either to pretreat the cement or to use high pressure to force liquid through a sample. Both make the test less representative of real-world conditions.

To solve this problem, White’s research team used a method called a beam-bending test, which is not typically used to measure permeability. In the test, a horizontal cylinder of cement is supported on both ends while a downward force is applied against the midpoint of the upper side of the cylinder, causing it to deflect. By measuring the way the cylinder responds to the deflection over time, the researchers were able to calculate how the liquid moves through the tiny pores inside the cement.

In a series of tests, Catherine Eiben, a former graduate student in White’s lab, measured the permeability of alkali-activated material made from a sodium hydroxide solution and slag, a byproduct of iron production. Anna Blyth, a rising senior, conducted another series of measurements using the material, but altered the solution so that the material contained soluble silica. The researchers found that the first version of alkali-activated material was more permeable than Portland cement; but the silica version had markedly lower permeability.

“It was quite exciting” said Blyth, who conducted the tests as part of her undergraduate independent research. “The work that Professor White does in her lab has important implications for industry and will hopefully help make it possible to create standards and codes to address the implementation of environmentally friendly substitutes for Portland cement.”

White said the findings are an encouraging step. But she said it does not clear the way completely for the new type of cement. While permeability is a key measure of durability, samples with low permeability can suffer from other potential problems.

“The type of material that performs really well on permeability — those with very small pore sizes — sometimes are vulnerable to micro-cracking,” she said. “We do know that that is true for these silicate-activated slag cements.”

White said future work in her lab plans to address the cracking question.

“We want to develop new methods to obtain accurate data on how these materials will perform over time,” she said. “This will help with the implementation of sustainable alternatives in the construction industry.”

The researchers involved in the project were Blyth, Eiben, White and George Scherer, the William L. Knapp ’47 Professor of Civil Engineering, Emeritus. Support for the work was provided in part by the National Science Foundation and the Peter B. Lewis Fund for Student Innovation in Energy and the Environment.