Thought to dwell mostly near the ocean’s surface, Chilean devil rays (Mobula tarapacana) are most often seen gliding through shallow, warm waters. But a new study by scientists at Woods Hole Oceanographic Institution (WHOI) and international colleagues reveals that these large and majestic creatures are actually among the deepest-diving ocean animals.

“So little is known about these rays,” said Simon Thorrold, a biologist at WHOI and one of the authors of the paper, published July 1, 2014, in the journal Nature Communications. “We thought they probably travelled long distances horizontally, but we had no idea that they were diving so deep. That was truly a surprise.”

Researchers utilized pop-up satellite archival transmitting tags to record the movement patterns of 15 Chilean devil rays in the central North Atlantic Ocean during 2011 and 2012. The tags, which stay on the animals for up to 9 months, also measure water temperature, depth, and light levels of the waters. Once the tags pop off, they float to the surface and beam data via the ARGO satellite system back to computers on shore.

“Data from the tags gives us a three-dimensional view of the movements of these animals, and a window into how they’re living in their ocean habitat—where they go, when, and why,” Thorrold added. 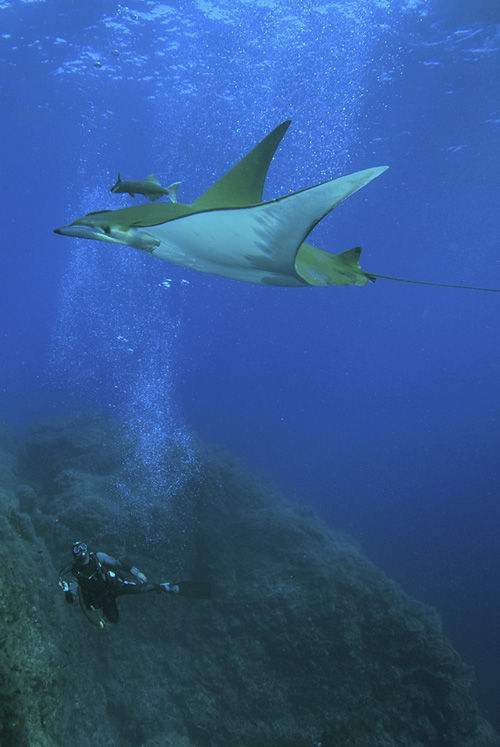 Devil rays, which can grow as large as four meters (13 feet) across, are ocean nomads traversing large areas of the ocean. Photo credit: Jorge Fontes, Institute of Marine Research, and Laboratory of Robotics and Systems in Engineering and Science

Devil rays, which can grow as large as four meters (13 feet) across, are ocean nomads travelling large areas of the ocean. Dive data from the tags showed individuals also routinely descended at speeds up to 6 meters per second (13.4 miles per hour) to depths of almost 2,000 meters (1.24 miles) in water temperatures less than 4 degrees Celsius (39.2 degrees Fahrenheit).

The deep dives generally followed two distinct patterns. The most common involved descent to the maximum depth followed by a slower, stepwise return to the surface with a total dive time of 60 to 90 minutes. The tagged rays generally only made one such dive during a 24-hour period. In the second dive pattern, individuals descended and then remained at depths of up to 1,000 meters (3,280 feet) for as long as 11 hours.

During the day, the rays would spend time up at the surface—presumably heating up—immediately before, and then again, after a deep dive. How else might these animals be dealing with the cold temperatures of the deep ocean? 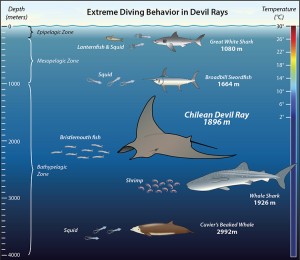 A previous study in the 1970s found that several species of devil rays possess a physiological adaptation —well-developed blood vessels around the cranial cavity that essentially serve as heat exchange systems. At the time, it was hypothesized that the rays must be using this adaptation to cool down rather than warm up.

“Rays were always seen in very warm water up at the surface, so why would they need an adaptation for cold water?  Once we looked at the dive data from the tags, of course it made perfect sense that the rays have these systems. Sometimes they’re down diving for two or three hours in very cold water — two to three degrees Celsius (35.6 to 37.4 degrees Fahrenheit),” Thorrold said.

While it’s not certain what the rays are doing at these depths, the dive profiles suggest that they’re foraging on large numbers of fish that live in deeper waters.

“There’s an enormous amount of biomass in the deep ocean that we’re only starting to understand the significance of,” said co-author Camrin Braun, a graduate student in the MIT/WHOI Joint Program in Oceanography. “This paper suggests that devil rays are aware of and regularly exploit this resource, which demonstrates an unexpected new link between the surface and deep ocean.”

Devil rays are coming under increasing pressures from fishing, particularly in the Indian and Pacific Oceans. Manta gill rakers are targeted for Chinese medicine, and their cartilage is used as filler in shark fin soup.

“Ultimately, answering whether these animals depend on the deep layers of the ocean for their feeding and survival could have major implications for their management and that of oceanic habitats,” added co-author Pedro Afonso, a researcher at the Institute of Marine Research (IMAR) at the University of the Azores and the Laboratory of Robotics and Systems in Engineering and Science (LARSyS).

Little is known about the life span of devil rays or at what age they reproduce. Like other large rays, devil rays are thought to have just one pup born per litter about every two years.

“With those kinds of low reproductive rates, any type of mortality is going to have a big impact on the species,” Thorrold said. “We don’t know enough about devil rays to even know if we should be worried about their status. There are lines of evidence to suggest we ought to be worried, or at least that we should be trying to learn more about the biology and ecology of these rays.”