It has long been known that spectacular blue flashes–a type of bioluminescence–that are visible at night in some marine environments (currently including coastal California waters) are caused by tiny, unicellular plankton known as dinoflagellates. However, a new study has, for the first time, detailed the potential mechanism for this bioluminescence.

The study, which was partially funded by the National Science Foundation, is reported by Susan Smith of Emory School of Medicine, Thomas DeCoursey of Rush University Medical Center and colleagues in the Oct. 17, 2011 issue of the Proceedings of the National Academy of Sciences (PNAS).

A key aspect of the potential mechanism for bioluminescence in dinoflagellates proposed in the PNAS study involves voltage-gated proton channels–channels in membranes that can be opened or closed by chemical or electrical events.

J. Woodland Hastings, a member of the Smith and DeCoursey research team and an author of the PNAS article, suggested the presence of voltage-gated proton channels in dinoflagellates almost forty years ago. But the Smith and Decoursey team only recently confirmed them by the identification and subsequent testing of dinoflagellate genes that are similar to genes for voltage-gated proton channels that had previously been identified in humans, mice and sea squirts. 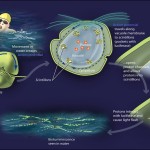 About the image: Proposed bioluminescence mechanism: When a dinoflagellate is mechanically agitated, an electrical impulse travels around its vacuole membrane. This impulse opens up proton channels that allow protons to flow from the vacuole into the scintillons, where they activate light-emitting luciferase proteins. The result: A flash of light. Image credit: Zina Deretsky, National Science Foundation

According to the study, here is how the light-generating process in dinoflagellates may work: As dinoflagellates float, mechanical stimulation generated by the movement of surrounding water sends electrical impulses around an internal compartment within the organism, called a vacuole–which holds an abundance of protons. (See accompanying illustration.) These electrical impulses open so-called voltage-sensitive proton channels that connect the vacuole to tiny pockets dotting the vacuole membrane, known as scintillons.

The red tide that is currently flashing off some California waters is almost certainly generated by dinoflagellates. Although the California species may be different from those included in this study, their mechanism for triggering flashes is believed to operate by the same mechanism.

This research illuminates the novel mechanisms underlying a beautiful natural phenomenon in our oceans, and enhances our understanding of dinoflagellates–some of which can produce toxins that are harmful to the environment.