Former college basketball and NBA player Chris Herren spoke on the University of Delaware campus Thursday, April 19, about the struggle with substance abuse that eventually ended his career.

As a high school athlete, Herren played in the 1994 McDonald’s All-American game, was named player of the year from 1992-1994 by the Boston Globe and was the Gatorade New England Player of the Year from 1993-1994, before enrolling in Boston College to continue playing basketball.

After injuring his wrist while playing, Herren said he went from drinking alcohol and smoking marijuana to doing lines of cocaine. Four months later, he was kicked out of school for failing a drug test.

Unable to return to Boston College, Herren went on to play his sophomore season at California State University Fresno, where he had “the best season I’ve ever played.” He was ranked second in the school’s career assists with 465 and seventh in career steals with 138.

A year later, Herren had to stand up in front of a crowd at a press conference and tell his family, friends and teammates that he had a cocaine addiction and was going to Salt Lake City for a 28-day rehabilitation stay. “I remember seeing my mom and grandpa cry after the press conference,” he said.

Unfortunately, he said, his time in rehabilitation was not successful and he continued to depend on drugs to get him through basketball games. 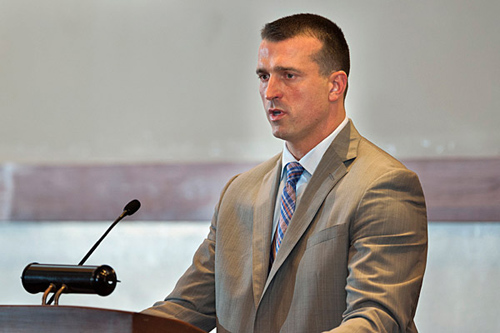 Herren was drafted his senior year by the Denver Nuggets, where he played only from 1999-2000 because of his addiction. Because his teammates didn’t want his addiction to affect them, he said, they made a decision to take alcohol off the planes, set a curfew and have the entire team look out for him.

Then, at a cookout held for family and friends at his first home with his wife, “my life changed forever,” he recalled. His drug dealer put a “little yellow pill at the palm of my hand, and I threw it into my mouth. My 40 milligram pill turned into 1,600 milligrams per day. I had no idea that my $25 addiction would turn into a habit worth thousands of dollars,” Herren said.

Denver traded him to the Boston Celtics as their starting point guard, which he called the dream of every young man from the New England area. “It was an honor to wear that uniform,” he said, but added that he called his dealer immediately because he needed to fuel his addiction before hearing his name over the loudspeaker for the first time.

Herren ended his career as a Celtic when he got hurt, then signed a summer league contract with the Dallas Mavericks. “I had the chance to choose $8 million or 800 milligrams of dope, and I chose dope,” said Herren. When he later wanted to change his mind, his coach told him, “We don’t do second chances in the NBA; you had your chance.”

Describing himself as “a professional NBA player with a monster habit,” Herren decided to go to Europe to play basketball. He said he wanted to change—to wean himself off the Oxycontin habit. He soon learned that Oxycontin does not do it that way. 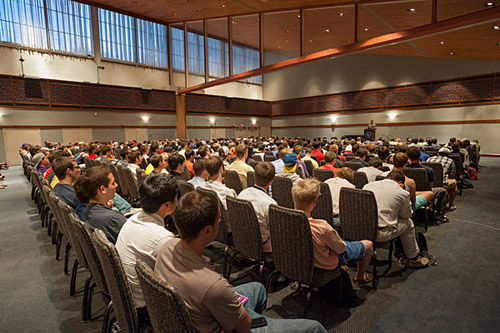 Herren chose to break his contract in Italy because of the addiction and later overdosed at a Dunkin Donuts and hit a woman while he was driving. “At 24 years old, I became a convicted heroin [user and] publicly known failure,” he said.

The next stop was Turkey, where Herren faced a massive issue in his addiction. “It was illegal to smuggle drugs into the country,” he said. “You’re in jail for life if you get caught.”

But he gave in, he said, and told his drug dealer to ship him a package filled with drugs. When he went to get the package, it had been cut open and Herren said his heart stopped from the fear of going to prison for life.

As it happened, luck was on his side. When he opened the package, there was a note from a fan who worked at Logan Airport, saying that if there were any other security worker working at the time, he would be in prison. The fan gave Herren a second chance, he said, not only for his career but also for his family.

After getting fired, Herren’s life began to spiral further down. He said he wanted to end his life because the addiction was so strong and he thought that there was no way out. He slept on the streets and finally found the courage to say “no to drugs” after a friend who was trying to get high with him was murdered later the same night.

Herren overdosed for the second time on June 4, 2008, after putting his kids on their school bus. He crashed his car into a cemetery fence, where he was pronounced dead on the scene, until a paramedic fought for his life.

On Aug. 1, 2008, Herren decided to commit to staying sober and fighting the addiction.

“Today, I realized that my worst days have become my best days…Being able to speak in front of college students is better than any jersey I have put on in my life,” said Herren.

He urged the audience of athletes, Greek life members and other students, to see his speech as an opportunity for change. “Do it the right way because [otherwise] you’ll be like me,” he said. “Take this as a lesson learned; I lived it.”

Herren’s talk was sponsored by Wellspring Student Wellness Program, the Apple team and the Interfraternity Council.