Berkeley Lab research could lead to applications in agriculture, industry

In research that could lead to better gas mask filters, scientists at the Department of Energy’s Lawrence Berkeley National Laboratory (Berkeley Lab) have been putting the X-ray spotlight on composite materials in respirators used by the military, police, and first responders, and the results have been encouraging. What they are learning not only provides reassuring news about the effectiveness of current filters in protecting people from lethal compounds such as VX and sarin, but they also provide fundamental information that could lead to more advanced gas masks as well as protective gear for civilian applications.

The project at Berkeley Lab is led by Hendrik Bluhm, a senior staff scientist with joint appointments in the Chemical Sciences Division and the Advanced Light Source (ALS). On his team are two postdoctoral researchers in the Chemical Sciences Division, Lena Trotochaud and Ashley Head. The Berkeley Lab team is part of a larger collaboration that includes researchers at the University of Maryland at College Park, Johns Hopkins University, and the U.S. Naval Research Laboratory.

The researchers pointed out that studying how metal oxides interact with small organophosphates could be relevant beyond the gas masks used by the military and emergency responders. The work they are doing could have applications in sensing technologies. In addition, less potent forms of organophosphates are widely used as pesticides and herbicides, so the findings could help the agricultural industry and environmental scientists understand what eventually happens to these substances after they are released into the environment.

“This is a project where we are working to help save lives,” said Trotochaud. “That is very fulfilling.”

For Head, the project provided a particularly relevant topic of conversation at family gatherings.

“My sister-in-law is in the Air Force,” said Head. “I was telling her what I do, and she said, ‘When I’m deployed, I get a gas mask. Does it work?’ She tells her colleagues about what I’m working on. So much of what we do in basic science is far removed from an application. While our work is still fundamental, I can now tell my family what I’m doing, and they’ll actually understand.” 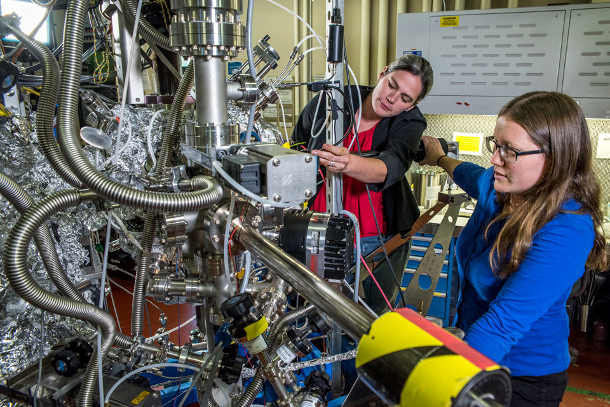 Do the masks work?

Current gas mask filters do counter current threats, but there are large gaps in knowledge about how they do so at the molecular level, the researchers said. The question comes up because many of the filters were developed to handle a wide range of ever-changing chemical threats and to work under a variety of different conditions all over the world. During World War I, chemical warfare agents were predominantly chlorine and mustard gases.

Since then, a new class of chemical weapon came onto the scene. Sarin and venomous agent X, or VX, are nerve agents so named because they interfere with the nervous system’s ability to communicate with muscles, including those that control breathing. The current materials used in gas mask filters provide effective protection against all of these compounds, despite the very different chemical properties of the gases.

Gas mask filters include activated carbon, a family of absorbents that trap toxins in millions of micro-pores. It is the same compound used to filter water and treat ingestion of poisons. The activated carbon traps the toxins, but in gas masks it is further augmented with metal oxides, such as copper and molybdenum, to help break down the toxins.

“Even though the first gas mask filters were developed before these new nerve agents emerged, the current filters are effective at capturing them, and they also seem to be good at breaking them down, but we still have some questions about the chemistry of this process,” said Trotochaud. “We know it works, but we don’t always know how it fails. We do know the filters sometimes stop working after a while when exposed to these organophosphorus compounds, so the chemistry of how the material is deactivated after exposure to these agents is a big part what we’re studying.”

The goal is to better understand the molecular interactions that occur as various gases are adsorbed by the gas mask filter materials, and the environmental conditions – air pollution, diesel fuel exhaust, water – that could alter performance and shelf life, so even better materials can be developed.

“Much of our early work focused on characterization,” said Bluhm, the project’s principal investigator. “There were a lot of details to resolve. What exactly does copper oxide do? What does molybdenum oxide do? Why does one behave differently than the other? Understanding where the differences are can make these filtration materials potentially much more efficient.”

The effects of water vapor were of particular interest because of how the masks are used, noted Bluhm.

“It’s a filtration mask that sits in front of our mouths, so there is high humidity as we breathe into it,” he said. “Among the published findings from our project is that water vapor seems to be neutral or even beneficial for the performance of the materials.”

This was reported in a 2016 study, which found that water exposure activated the composite surface in a way that facilitated the binding of the DMMP molecule, lowering the energy required to break the molecule down.

The researchers have tested the effects of water, octane, and nitrogen oxides, and none of these exposures decreased the ability of the metal oxides to bind to and break down DMMP molecules. Thus far, the project has yielded four published papers, with more to come.

“They still work very well,” said Trotochaud. “There are subtle differences that are interesting from a fundamental point of view but that do not affect the bulk performance.”

The draw of a powerful X-ray technique

Enabling the scientists to answer these questions is a powerful technique called ambient pressure X-ray photoelectron spectroscopy (XPS). Berkeley Lab researchers played a major role in the development of this new generation of instruments, now deployed at many synchrotron facilities and laboratories around the world, including the Advanced Light Source, a DOE Office of Science User Facility at Berkeley Lab.

XPS is a workhorse surface characterization technique enabling the precise determination of the chemical composition of the top few atomic layers, or “skin,” of materials with great detail. When in contact with a liquid or gas, the surface can act as a catalyst for the decomposition or reaction of molecules.

In XPS, a sample is illuminated by a beam of X-rays, which transfers part of its energy to electrons inside the atoms of the material. Measuring the kinetic energy and number of electrons that escape from the material’s surface allows a precise determination of the material’s chemical composition, including adsorbed and decomposed molecules at the surface.

“The development of ambient pressure XPS now allows us to perform these measurements in situ, which more closely mimics real-world situations,” said Bluhm.

The Berkeley Lab researchers are able to add molecules of DMMP to simulate nerve agents in the analysis chamber, and study how they interact with the surface of the copper or molybdenum oxides. They have also been able to expose the material to water vapor before adding DMMP to see if there is any difference in the surface chemistry.

Head noted that ambient pressure XPS can provide more quantitative data than other techniques that have been used to study gas mask filters. The data helps establish computational baselines for the theoretical modeling of highly toxic organophosphates on metal oxide surfaces.

“We can look at the DMMP molecule landing on the surface of the metal oxide, and not only can we see that it breaks apart and decomposes, we can tell what percentage of the molecule decomposes,” said Head.

The ability to use this instrument was one of the major attractions that drew Trotochaud to this project.

“XPS is so powerful; you get so much information from it,” she said. “It’s like a puzzle. With ambient pressure XPS, you get bits of info that are somehow connected, but you don’t know the whole picture until the very end, and when you finally get it, it’s so satisfying.”

The project is now entering its next phase, in which different composite materials will be tested to determine whether they might perform better than existing filters.

The other collaborators on this project include Bryan Eichhorn and Maija Kukla at the University of Maryland; Kit Bowen at Johns Hopkins University; and Kenan Fears, Jeffrey Long, and Jeffrey Owrutsky at the U.S. Naval Research Laboratory.

This project is funded by the Department of Defense through the Defense Threat Reduction Agency.