Think of the Sahara and you will conjure images of a vast desert landscape, with nothing but sand as far as the eye can see.  But for a period of about 10,000 years, the Sahara was characterized by lush, green vegetation and a network of lakes, rivers and deltas.

This “green Sahara” occurred between 14,800 and 5,500 years ago during what is known as the “African Humid Period.” Why and how it ended is the subject of scientific study that holds important information for predicting the region’s response to future climate change.

In a study published in Nature Geoscience, a team of researchers provides new insight into the behavior of the African monsoon at the end of the African Humid Period and the factors that caused it to collapse. 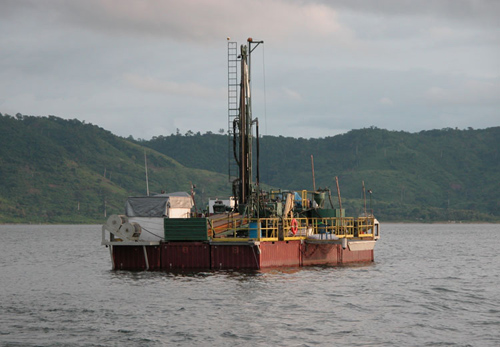 “Our work suggests that the African monsoon’s response to climate forcing is more complicated than previously understood,” said lead author Tim Shanahan, assistant professor at The University of Texas at Austin Jackson School of Geosciences.  “Really big forcings like a collapse in the circulation of the Atlantic can cause synchronous drought across North Africa – and the current generation of climate models do a very good job at simulating events like this.

“However, the monsoon response to more gradual forcing is more complex.  For example our data show that gradual changes in radiative forcing over the past 10,000 years produced dramatic changes to climate that are locally abrupt but asynchronous.  But climate models don’t do a great job of simulating the complex mechanisms behind these changes, such as seasonality.  Understanding how future changes in the monsoon will occur in response to gradual increases in greenhouse gases will require a better understanding of these processes.” 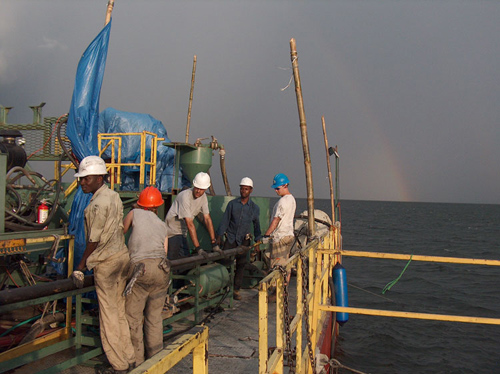 The scientists used the chemical composition of leaf waxes preserved in sediments from Lake Bosumtwi, Ghana, to create a reconstruction of precipitation in humid tropical West Africa for the past 20,000 years.

“We have a brand new record from West Africa and from it we found that the end of the humid period was more nuanced than previously believed,” said co-author Konrad Hughen, a geochemist with Woods Hole Oceanographic Institution. “Rather than collapsing abruptly across the entire region, we determined that the monsoon decreased more gradually and migrated southward over a period of several thousand years.” 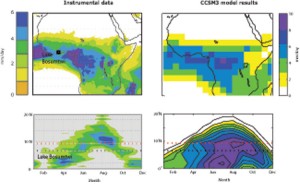 The modern climatology of West Africa is displayed using instrumental data from the Tropical Rainfall Measuring Mission, left, and the climate model, right. Both show the seasonal cycle of precipitation changes associated with the northward progression of the monsoon, but the model does not fully simulate the mid-summer dry season. The authors hypothesize that seasonality drives the delay in late African Humid Period drying in equatorial West Africa. For their study, the scientists used the chemical composition of leaf waxes preserved in sediments from Lake Bosumtwi, Ghana, to create a reconstruction of precipitation in humid tropical West Africa for the past 20,000 years. Illustration courtesy of Shanahan, et al (Click image to enlarge)

This southward shift could appear as abrupt changes locally – for example, a lush jungle reverts to grassland – but does not mean the entire region underwent abrupt changes at the same time.

The mechanisms that contribute to the changing monsoon are complicated and include orbital shifts of the Earth around the sun, which impact the intensity of solar radiation. For example, if solar energy is reduced, the monsoon circulation is weaker and the whole system gets dryer. However, a greener landscape will boost the monsoon more than a sandier landscape, and even though the sun’s energy in the region is getting weaker, widespread forest cover can help maintain a strong monsoon for a time. But eventually a threshold is reached and the system shifts. When and how that happens can be challenging to parse.

By synthesizing a large array of records across northern Africa for this study, the scientists could observe large spatial and temporal patterns of variability. When viewed together, rather than one coherent shift in the West African monsoon, the team saw changes occurring at different times in different places.

“These are important components to understand and they must be included in climate models of the future,” said Hughen. “We need to understand these behaviors to be able to model them.”

“Africa’s tropical rainbelt supplies a significant (>60–90%) portion of northern and equatorial Africa’s annual moisture,” the authors wrote, “and as a result, changes in the timing or intensity of the seasonal rainfall influence food and water security for more than 150 million people.”

Funding for this study came from the National Science Foundation and the NOAA Climate and Global Change Postdoctoral Fellowship at UCAR.