Thinking small has enabled an international team of scientists to gain new insight into the evolution of planetary building blocks in the early solar system.

The researchers compared the results of small-scale numerical simulations of colliding rock and dust particles to the composition of meteorites. They found that collisions helped transform initially porous materials into the more highly solidified asteroids and meteorites observed today. The team of seven scientists published their evidence last month in Nature Communications.

Planetary scientists study chondritic meteorites to reconstruct planet formation. These meteorites are made of a mixture of solid chondrules, millimeter-sized beads (the approximate width of a penny) that became embedded in a fluffy matrix. 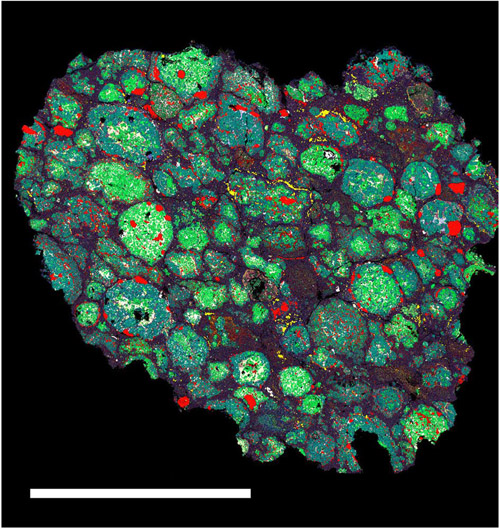 This image shows an element map of chondrules in the Renazzo meteorite. Green is magnesium, yellow is calcium, red is iron and blue is silicon. These textures are similar to one of the simulations of a mesoscale impact shock reported in December 2014 in Nature Communications. The scale bar at lower left measures six millimeters (two-tenths of an inch). Image courtesy of Bland et al. (2014)

“Meteorites probably began forming as dust grains coming together gently and sticking,” said study co-author Fred Ciesla, associate professor in geophysical sciences. But today, meteorites are solid objects. “If one hit you in the head, it would hurt,” Ciesla observed. “One of the questions I’ve always wondered about is how did we get to that point.”

In the study led by Phil Bland of Curtin University in Australia, simulations revealed the collisional evolution of the first solids that formed early in the 4.5 billion-year history of the solar system.

“We know that the first primordial objects in the solar system were very porous,” Bland said. “We know that the meteorites that sample those objects aren’t that porous anymore. It’s very likely that they lost their porosity in impacts. In our work we flesh out the consequences.”

These consequences include a cosmic speed limit for the colliding objects. Increasing numbers of collisions would bring more energetic collisions, resulting in a level of particle squeezing that chondritic meteorites do not show. 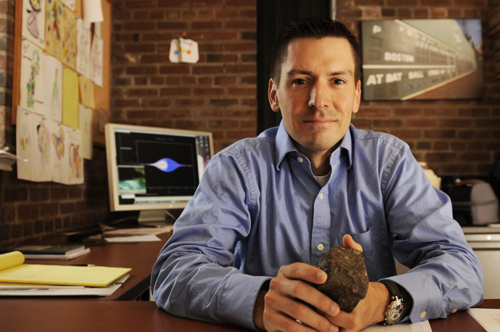 Fred Ciesla, associate professor in geophysical sciences, pursues research that cuts across the interdisciplinary boundaries of the meteorite record and the astrophysical environment of the early solar system. Photo by Dan Dry

The calculated speed limit would have ranged somewhere between 2,700 and 14,400 kilometers an hour (1,677 to 8,948 miles an hour; even the lowest end of the range is more than twice as fast as the cruising speed of Boeing 747 airliners). This may give scientists new ways of thinking about primordial objects in the solar system, Bland said. This cosmic speed limit is inconsistent with modeling studies that depict an outward migration of Jupiter and Saturn early in the history of the solar system—a consequence of assumed higher collision speeds.

This series of images simulates the collision of asteroids measuring 10 kilometers (6.2 miles) and 100 kilometers (62 miles) in diameter. The blue region consists of tracer particles to track post-shock temperatures in planetesimal material for comparison to mesoscale simulations of the same process and meteorite characteristics. Image courtesy of Bland et al. (2014)

The Nature Communications study was inspired by simple experiments conducted in microgravity aboard the International Space Station. An astronaut put table salt, sugar crystals and other granular materials inside plastic bags, shook them up, then video-recorded the results. All types of materials used in the experiments clumped together.

“It’s probably controlled by electrostatics, basically charged particles, which helps bring these materials together,” Ciesla said. As the clumps continue to grow, however, weakening electrostatics become insufficient to consolidate material into asteroid-sized objects.

“As these small, dusty clumps or dust particles bang into one another they form larger and larger, almost fairly-castle structures,” Ciesla explained. “But the meteorites we look at are not little fluff balls. They’re very high-density, compact rocks.”

Other factors fail to account for the density change. Gravity can transform soft sediments to stone by squeezing them to greater density at high pressures. But the gravity on asteroids is too weak to have brought about that transformation in meteorites, which are their offspring.

These facts led Ciesla and his colleagues to conduct simulations that would show what happens when materials of differing composition respond to collision-generated shock waves. The team simulated the process on his desktop computer, using a software code called iSALE. Garth Collins of Imperial College London, a co-author of the Nature Communications article, was a primary developer of the code.

In much previous work, scientists had simulated the effects of large-scale shocks resulting from colliding asteroids or from asteroids colliding with Earth.

“These simulations do a very good job of telling you what’s happening on a global scale,” Ciesla said, but many meteorites can fit into the palm of a hand. This inspired Ciesla and his colleagues to perform the first mesocale simulations on centimeter-sized meteorites, a much more computationally demanding proposition.

When a high-velocity collision occurs, it creates a pressure wave. A collision that produces little energy passes through the impacted material at no more than the speed of sound.

“But if the velocity is greater than the speed of sound, you produce a shock,” Ciesla said. The shock transforms the impacted material from one state to another, as from solid to liquid or gas.

Their results: Porous materials absorb much of the energy from a collision and become extremely hot. The solid chondrules, meanwhile, easily carry the energy away and remain much cooler. But scientists often examine the easily measured chondrules in order to understand whatever collisional processing or heating may have occurred in meteorites. The new data show that chondrules have not recorded this information.

“That’s going to be in the porous matrix because that’s where all the energy really gets absorbed,” Ciesla said.