In the aftermath of the explosion of BP’s Deepwater Horizon drilling rig in the Gulf of Mexico, a dispersed oil plume  was formed at a depth between 3,600 and 4,000 feet and extending some 10 miles out from the wellhead. An intensive study by scientists with the Lawrence Berkeley National Laboratory (Berkeley Lab) found that microbial activity, spearheaded by a new and unclassified species, degrades oil much faster than anticipated. This degradation appears to take place without a significant level of oxygen depletion.

“Our findings show that the influx of oil profoundly altered the microbial community by significantly stimulating deep-sea psychrophilic (cold temperature) gamma-proteobacteria that are closely related to known petroleum-degrading microbes,” says Terry Hazen, a microbial ecologist with Berkeley Lab’s Earth Sciences Division and principal investigator with the Energy Biosciences Institute, who led this study. “This enrichment of psychrophilic petroleum degraders with their rapid oil biodegradation rates appears to be one of the major mechanisms behind the rapid decline of the deepwater dispersed oil plume that has been observed.” 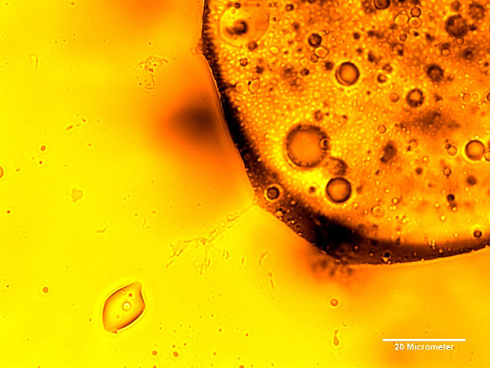 About the image: Microbes are degrading oil in the deepwater plume from the BP oil spill in the Gulf, a study by Berkeley Lab researchers has shown. Image credit: Image from Hoi-Ying Holman group

The uncontrolled oil blowout in the Gulf of Mexico from BP’s deepwater well was the deepest and one of the largest oil leaks in history. The extreme depths in the water column and the magnitude of this event posed a great many questions. In addition, to prevent large amounts of the highly flammable Gulf light crude from reaching the surface, BP deployed an unprecedented quantity of the commercial oil dispersant COREXIT 9500 at the wellhead, creating a plume of micron-sized petroleum particles. Although the environmental effects of COREXIT have been studied in surface water applications for more than a decade, its potential impact and effectiveness in the deep waters of the Gulf marine ecosystem were unknown.

Analysis by Hazen and his colleagues of microbial genes in the dispersed oil plume revealed a variety of hydrocarbon-degraders, some of which were strongly correlated with the concentration changes of various oil contaminants. Analysis of changes in the oil composition as the plume extended from the wellhead pointed to faster than expected biodegradation rates with the half-life of alkanes ranging from 1.2 to 6.1 days. 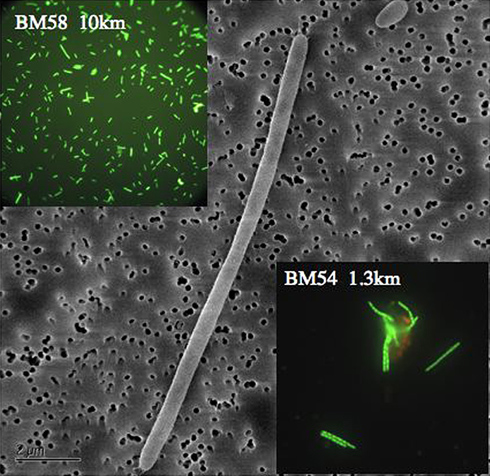 About the image: Analysis with Berkeley Lab’s phyloChip revealed the dominant microbe in the dispersed Gulf of Mexico oil plume was a new species, closely related to members of Oceanospirillales family. Image credit: Image from Terry Hazen group

“Our findings, which provide the first data ever on microbial activity from a deepwater dispersed oil plume, suggest that a great potential for intrinsic bioremediation of oil plumes exists in the deep-sea,” Hazen says. “These findings also show that psychrophilic oil-degrading microbial populations and their associated microbial communities play a significant role in controlling the ultimate fates and consequences of deep-sea oil plumes in the Gulf of Mexico.” 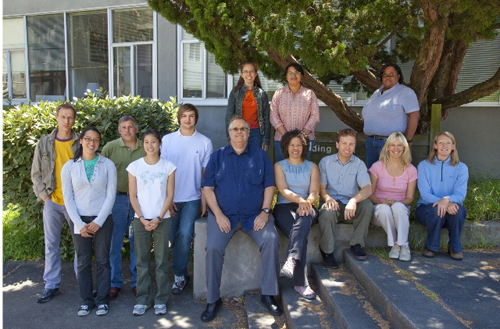 Hazen and his colleagues began their study on May 25, 2010. At that time, the deep reaches of the Gulf of Mexico were a relatively unexplored microbial habitat, where temperatures hover around 5 degrees Celsius, the pressure is enormous, and there is normally little carbon present.

“We deployed on two ships to determine the physical, chemical and microbiological properties of the deepwater oil plume,” Hazen says. “The oil escaping from the damaged wellhead represented an enormous carbon input to the water column ecosystem and while we suspected that hydrocarbon components in the oil could potentially serve as a carbon substrate for deep-sea microbes, scientific data was needed for informed decisions.”

Hazen, who has studied numerous oil-spill sites in the past, is the leader of the Ecology Department and Center for Environmental Biotechnology at Berkeley Lab’s Earth Sciences Division.  He conducted this research under an existing grant he holds with the Energy Biosciences Institute (EBI) to study microbial enhanced hydrocarbon recovery. EBI is a partnership led by the University of California (UC) Berkeley and including Berkeley Lab and the University of Illinois that is funded by a $500 million, 10-year grant from BP. 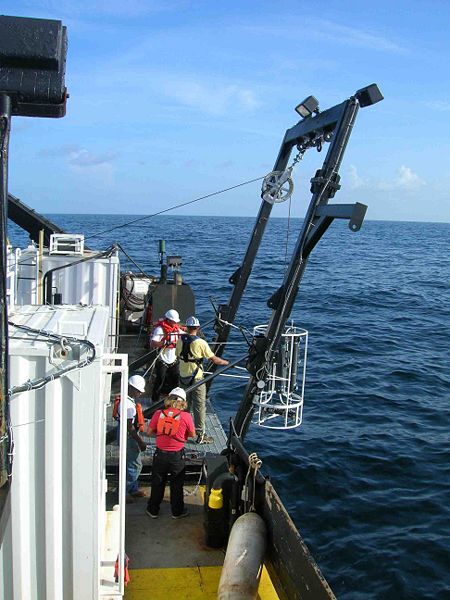 About the image: Berkeley Lab researchers collected more than 200 samples from 17 deepwater sites around the damaged BP wellhead in the Gulf of Mexico between May 25 and June 2, 2010. Image credit: Image from Terry Hazen group

Results in the Science paper are based on the analysis of more than 200 samples collected from 17 deepwater sites between May 25 and June 2, 2010. Sample analysis was boosted by the use of the latest edition of the award-winning Berkeley Lab PhyloChip – a unique credit card-sized DNA-based microarray that can be used to quickly, accurately and comprehensively detect the presence of up to 50,000 different species of bacteria and archaea in a single sample from any environmental source, without the need of culturing. Use of the Phylochip enabled Hazen and his colleagues to determine that the dominant microbe in the oil plume is a new species, closely related to members of Oceanospirillales family, particularly Oleispirea antarctica and Oceaniserpentilla haliotis.

Hazen and his colleagues attribute the faster than expected rates of oil biodegradation at the 5 degrees Celsius temperature in part to the nature of Gulf light crude, which contains a large volatile component that is more biodegradable. The use of the COREXIT dispersant may have also accelerated biodegradation because of the small size of the oil particles and the low overall concentrations of oil in the plume. In addition, frequent episodic oil leaks from natural seeps in the Gulf seabed may have led to adaptations over long periods of time by the deep-sea microbial community that speed up hydrocarbon degradation rates.

One of the concerns raised about microbial degradation of the oil in a deepwater plume is that the microbes would also be consuming large portions of oxygen in the plume, creating so-called “dead-zones” in the water column where life cannot be sustained. In their study, the Berkeley Lab researchers found that oxygen saturation outside the plume was 67-percent while within the plume it was 59-percent.

“The low concentrations of iron in seawater may have prevented oxygen concentrations dropping more precipitously from biodegradation demand on the petroleum, since many hydrocarbon-degrading enzymes have iron as a component,” Hazen says. “There’s not enough iron to form more of these enzymes, which would degrade the carbon faster but also consume more oxygen.”