Many people believe that getting older means losing a mental edge, leading to poor decision-making.

But a new study from North Carolina State University shows that when it comes to making intuitive decisions – using your “gut instincts” – older adults fare as well as their juniors.

The researchers tested groups of young adults (aged 17-28) and community-dwelling older adults (aged 60-86) – meaning they live in the community, rather than in a nursing home – to see how they fared when making decisions based on intuitive evaluation.

For example, study participants were asked to choose from a list of apartments based on each apartment’s overall positive attributes. Under such conditions, young and older adults were equally adept at making decisions.

“But not every decision can be made that way,” says Dr. Thomas Hess, a professor of psychology at NC State and co-author of the study. “Some decisions require more active deliberation. For example, those decisions that require people to distinguish pieces of information that are important from those that are unimportant to the decision at hand.” And when it comes to more complex decision-making, Hess says, older adults face more challenges than their younger counterparts. 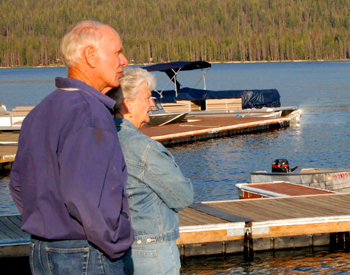 About the image above: Many people believe that getting older leads to poor decision-making. Research shows that it is not that simple. Education and the complexity of the decision play important roles. Image credit: North Carolina State University.

In one portion of the study, participants were given a list of specific criteria to use in selecting an apartment. That list was then taken away, and each participant had to rely on his or her memory to incorporate the criteria into their decision-making.

However, there was considerable variation among the older adults who participated in the study – some did very well at the complex decision-making.

“Older adults with a higher education did a better job of remembering specific criteria and utilizing them when they made decisions,” says lead author Tara Queen, a psychology Ph.D. student at NC State. “Ultimately, they made better choices.”

“This tells us that the effects of age on decision-making are not universal,” Hess says. “When it comes to making intuitive decisions, like choosing a dish to order from a menu, young and old are similar.

Age differences are more likely to crop up when it comes to complex decision-making, such as choosing a health-care plan based on a complex array of information. But even then, it appears that any negative effects of aging will be more evident in those with lower levels of education.”

The research can be used to change the way we present information to older adults, Hess adds.

Queen explains that “presenting older adults with overwhelming amounts of information is less beneficial to them. For example, different people have different priorities. Information can be broken down into categories. People could then decide which categories are most important to them, and dig down for additional information as needed.”

Queen and Hess are currently doing additional research to determine exactly how the complexity of information being presented to older adults affects their decision-making – knowledge that could allow for more specific measures that could be used to help older adults continue to make good decisions.