Brown University cognitive scientists have identified specific brain regions that work together to allow us to choose from among the options we store in working memory. Findings appear in the journal Neuron.

PROVIDENCE, R.I. [Brown University] — Keep this in mind: Scientists say they’ve learned how your brain plucks information out of working memory when you decide to act.

Say you’re a busy mom trying to wrap up a work call now that you’ve arrived home. While you converse on your Bluetooth headset, one kid begs for an unspecified snack, another asks where his homework project has gone, and just then an urgent e-mail from your boss buzzes the phone in your purse. During the call’s last few minutes these urgent requests — snack, homework, boss — wait in your working memory. When you hang up, you’ll pick one and act.

When you do that, according to Brown University psychology researchers whose findings appear in the journal Neuron, you’ll employ brain circuitry that links a specific chunk of the striatum called the caudate and a chunk of the prefrontal cortex centered on the dorsal anterior premotor cortex. Selecting from working memory, it turns out, uses similar circuits to those involved in planning motion.

In lab experiments with 22 adult volunteers, the researchers used magnetic resonance imaging to track brain activity during a carefully designed working memory task. They also measured how quickly the subjects could choose from working memory — a phenomenon the scientists called “output gating.”

“In the immediacy of what we’re doing we have this small working memory capacity where we can hang on to a few things that are going to be useful in a few moments, and that’s where output gating is crucial,” said study senior author David Badre, professor of cognitive, linguistic, and psychological sciences at Brown. 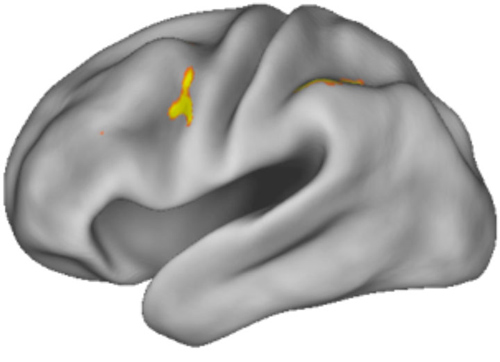 From the perspective of cognition, said lead author and postdoctoral scholar Christopher Chatham, input gating — choosing what goes into working memory — and output gating allow people to maintain a course of action (e.g., finish that Bluetooth call) while being flexible enough to account for context in planning what’s next.

Of cognition and wingdings

In their experiments Badre, Chatham, and co-author Michael Frank, associate professor of cognitive, linguistic, and psychological sciences, provided their volunteers with four different versions of a similar working memory task. The versions distinguished output gating from input gating so that the anatomical action observed in the MRI could reliably associate with output gating behavior.

In each round, volunteers saw a sequence of characters — either letters of the alphabet or wingdings (typographical symbols like stars and snowflakes). Before or after the sequence, the volunteers were also given a context cue in the form of a numeral that told them which kind of character would be relevant at end of the task (e.g., “1” might mean a wingding while “2” might mean a letter). The last step for volunteers was to select between groups of characters on the screen that included whichever contextually relevant character they had seen in the sequence (e.g., if the subject had seen a “1” and later a snowflake during the sequence, they should select the group that included a snowflake).

With this experimental design the researchers could measure performance and monitor brain activity with subjects who had distinct moments of input and output gating, regardless of the character load in working memory.

People accomplished the tasks with a range of speeds, which the researchers regarded as a proxy for the amount of cognitive work volunteers had to do. People were slowest in making a selection when they got the context cue last and then had to gate just one specific symbol out of memory (e.g., they saw the sequence, then saw a 1, and then had to choose the option with a wingding they had seen). People were fastest at making a selection when they were given the context first and then had to pick the one character of that kind that they saw (e.g., they saw a “2,” then the sequence in which only letters mattered, and then had to choose the option with a letter they had seen).

In analyzing the results, Chatham and his co-authors found that the caudate and the dorsal anterior premotor cortex, contributed distinctly to the reaction times they saw. These separate roles in the partnership agree with computational models of how the brain works.

“The division of labor that’s specifically posited by these computational models is one in which there is a basically a context being represented in the prefrontal cortex that determines the overall efficiency of going from stimulus to response – like a route,” Chatham said. “The striatum is involved in the actual gating of that flow of information,” he said, “like traffic lights along the route.”

So the cortex interprets the context, while the striatum implements the gating. When the context is unhelpfully general and the gating is very specific, for example, the task takes a lot of time.

The findings help advance studies of how cognition works in the brain and could help psychiatrists analyze behavior in people where those areas of the brain have been injured, the researchers said. It also highlights how similar brain circuits can execute different functions – motion and working memory gating.