New research from the University of Exeter and King’s College London has shown how a population of brown trout can survive in the contaminated waters of the River Hayle in Cornwall where metal concentrations are so high they would be lethal to fish from unpolluted sites.

The team believe this is due to changes in the expression of their genes. The research was funded by NERC and the Salmon and Trout Association.

The researchers compared the trout living in the River Hayle with a population living in a relatively clean site in the River Teign. The results showed that the accumulation of metals in the kidney and liver – where metals are stored and detoxified – were 19 and 34 times higher in the  Hayle trout, respectively. In the gill, concentrations averaging 63 times higher were present in the Hayle fish, but there were no differences in metal content in the gut. This accumulation of metals in the Hayle fish highlights their extraordinary tolerance of the extreme metal concentrations in their environment. 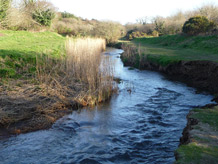 The contaminated waters of the River Hayle in Cornwall which harbours healthy trout. Image credit: University of Exeter

In order to investigate how the Hayle brown trout are able to tolerate such high levels of metal exposure, and also look for potential signs of toxicity, advanced high throughput sequencing was conducted at the Exeter Sequencing Facility to sequence the genes and then measure changes in their expression between the two river sites. The gene encoding a protein, metallothionein, responsible for binding, storing and detoxifying a number of metals, was found to be highly expressed in the River Hayle trout, indicating its importance in their ability to tolerate metals in their environment. Evidence of the presence of other metal-binding and transporting proteins, particularly those responsible for handling iron, was also found.

This work was led by T. Uren Webster, Dr R. van Aerle and Dr E Santos from the University of Exeter and Dr N Bury from King’s College London, and has been published in the journal Environmental Science & Technology.

Tamsyn Uren Webster said: “The work demonstrates that this population of brown trout has developed strategies for dealing with the metal pollution in the water and accumulation in their tissues avoiding the lethal damage that such concentrations of metals would normally cause.”

A detailed understanding of how the Hayle trout population has developed this tolerance could have potential implications for re-stocking rivers and increasing food security in polluted regions of the world.

Dr Eduarda Santos from Biosciences said: “The story of the brown trout in the river Hayle is a fascinating one, demonstrating its resilience and its ability to defeat the odds and tolerate the challenges imposed upon them as a result of human activities. Many aspects of this story remain untold: we do not know how or when this tolerance has arisen, and, most importantly, we do not know what the future holds for them if they are challenged with further stressors in their environment. But we know that such populations need careful management; if the Hayle brown trout, with their unique physiology, were to be lost, it is possible that this river may never be home to brown trout again. Therefore, understanding the relationship of fish with their environment is a crucial requirement to effectively manage and protect our aquatic ecosystems.”

Dr Nic Bury said: “Cornwall has a rich history of mining activity. Despite the cessation of the majority of this activity in the 19th and 20th centuries a number of rivers and estuaries, still possess elevated metals. Brown trout are extremely sensitive to metals when tested in the laboratory. However, biology is remarkable and adaptable, and it is astonishing that trout are able to survive and flourish in the river Hayle. It may be that this population is unique and an important component of the genetic diversity of brown trout.”