Study finds turtles are closer kin to birds, crocodiles than to lizards, snakes

What are turtles, and where did they come from?

Precise answers to these questions have long eluded scientists. But new research led by Daniel Field of Yale University and the Smithsonian Institution recasts the turtle’s disputed evolutionary history, providing fresh evidence that the familiar reptiles are more closely related to birds and crocodiles than to lizards and snakes.

“These observations address one of the defining biological questions of the past decade, helping us illuminate the murkier reaches of reptile evolution,” said Field, a doctoral candidate in geology and geophysics at Yale and a predoctoral fellow at the Smithsonian Institution’s National Museum of Natural History. “We show that turtles share a more recent common ancestor with birds and crocodilians — a group known as archosaurs — than with lizards and snakes.”

Field and collaborators report their findings May 5 in the journal Evolution and Development. 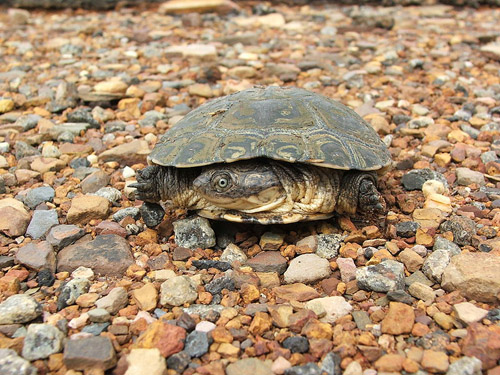 Reptiles comprise a vast animal group of more than 20,000 species. The interrelationships of some subgroups are well understood, the scientists said. Birds are most closely related to crocodilians among living reptiles, for example, while snakes, lizards, and New Zealand’s tuatara form a natural group. But turtles’ precise place has been unclear, in part due to conflicting research results.

MicroRNAs are viewed by some scientists as especially good evolutionary markers.

Field and collaborators revisited a foundational microRNA study, applied updated criteria for microRNA identification, and came to a different conclusion.

“Several studies purporting to investigate microRNAs misidentified other small RNA molecules as microRNAs,” said Field. “In our study, we collected new microRNA data from a variety of vertebrate animals and adhered to strict new guidelines for microRNA identification. When the experiment was redone, support for turtles as closer relatives of lizards and snakes turned out to be spurious, while support for turtles as closer relatives of birds and crocodilians was very strong.”

In short, he said, microRNAs and DNA sequences now yield a common signal uniting turtles and archosaurs (birds and crocodilians).

“These results are exciting because, for the first time, we obtain a consistent evolutionary signal from different sources of molecular data regarding the evolutionary position of turtles,” Field said.

The paper is “Toward consilience in reptile phylogeny: microRNAs support an archosaur, not lepidosaur, affinity for turtles.”

Other authors on the paper are Jacques Gauthier, also of Yale, Ben King of the Mount Desert Island Biological Laboratory, Davide Pisani of the University of Bristol, Tyler Lyson of the Smithsonian Institution, and Kevin Peterson of Dartmouth College.

Support for the research came from the Yale Peabody Museum, the Government of Alberta, the Canadian Natural Sciences and Engineering Research Council, and NASA.