Just days before a team of researchers from Woods Hole Oceanographic Institution (WHOI) and National Taiwan University set out to conduct fieldwork in the East China Sea, Typhoon Morakot—one of the most destructive storms ever to hit Taiwan—made landfall on the island, causing widespread damage and drastically altering the flow of water along the nearby continental shelf.

The typhoon, which struck in Aug. 2009, caused catastrophic damage in Taiwan, killing several hundred people and dropping up to 2 meters of rain in just 5 days in the mountains. 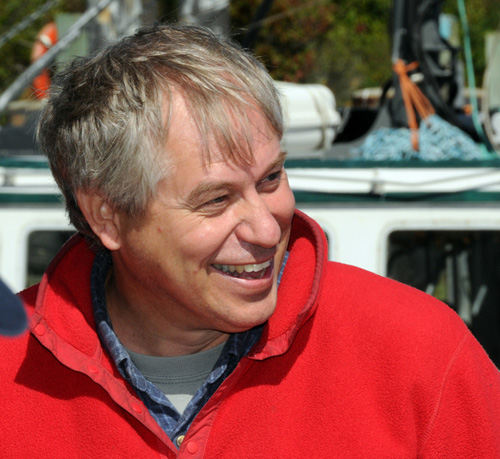 Glen Gawarkiewicz was one of the primary investigators for the joint U.S.-Taiwan program called “Quantifying, Predicting, and Exploiting Uncertainty” (QPE).The program is using data collected in the field to understand how uncertainty in computer models of the ocean near Taiwan changes in time and space. The QPE team hopes it will be able to improve the current oceanographic understanding of the East China Sea, and improve methods used to model similar currents around the world. (Photo by Jayne Doucette, Woods Hole Oceanographic Institution)

The research has just appeared in a special issue of the Journal of Marine Research.

Although the East China Sea is home to some of the world’s most active fisheries and shipping lanes, the basic oceanography of the area is not yet well understood, says WHOI coastal oceanographer Glen Gawarkiewicz, one of the primary investigators for the program. “It’s a very difficult place to study—the currents in the region are extremely powerful, and are constantly shifting and changing, which makes it tough to predict how the ocean will behave there at any given time,” he notes. As a result, Gawarkiewicz says existing computer models of the area have a large degree of “uncertainty,” or margin of error.

The joint program, called “Quantifying, Predicting, and Exploiting Uncertainty” (QPE), is using data collected in the field to understand how uncertainty in computer models of the ocean near Taiwan changes in time and space. In the process, Gawarkiewicz hopes the QPE team will not only be able to improve the current oceanographic understanding of the East China Sea, but improve methods used to model similar currents around the world. Funding for the program was provided by the U.S. Office of Naval Research. 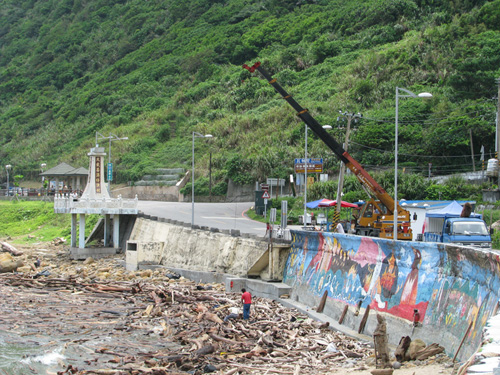 Typhoon Morakot, which struck in Aug. 2009, was one of the most destructive storms ever to hit Taiwan, causing widespread damage and killing several hundred people. It dropped up to 2 meters of rain in just 5 days in the mountains and drastically altered the flow of water along the nearby continental shelf. (Photo by Frank Bahr, Woods Hole Oceanographic Institution)

The main goals of the QPE program are twofold, says Gawarkiewicz. First, it strives to understand how a feature caused by upwelling of cold water, dubbed the “Cold Dome,” forms along the continental slope, and attempts to predict when and how it might appear. This phenomenon may play a role in both the formation of new currents and the transport of nutrient-rich water up from the deep ocean, a process essential for the health of marine fisheries. The QPE researchers also set out to examine when and where the Kuroshio Current (a large regional current similar to the Gulf Stream) pushes onto the continental shelf, causing complex currents to appear.

Gawarkiewicz says the shape of the ocean floor in the area may play a role in the complexity of those currents, and may contribute to the high uncertainty that appears in the computer models. As the Kuroshio moves along the continental slope, it passes over a series of three underwater canyons that alter its flow, creating new currents and eddies.

The QPE team conducted their fieldwork in the East China Sea during August and September 2009, using a satellite link to interact remotely with ocean modeler Pierre Lermusiaux at Massachusetts Institute of Technology. Each day, Lermusiaux ran computer models of the region, looking for areas of high uncertainty, then directed the team to those spots to collect samples and measure currents. The team immediately sent this new data back to Lermusiaux, who fed it back into the model. In this way, the researchers were able to improve the model’s accuracy in real time.

“There’s a feedback between the observations and the modeling,” Gawarkiewicz notes. “Basically, if you can make good observations in areas of high uncertainty, you can reduce the uncertainty in the future for that area.” 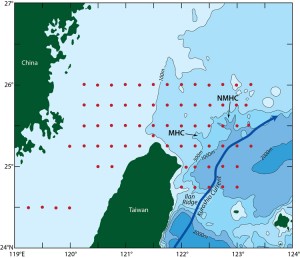 In their work to understand the strong currents over the continental shelf and slope in the East China Sea, the researchers used four ships for intensive sampling of the continental shelf and slope, and deployed several moorings and conducted high-resolution hydrographic surveys. In this figure, the red dots represent profiles of water sampled during the broad scale survey. MHC denotes Mien-Hua Canyon while NMHC denotes Northe Mien-Hua Canyon. Figure by Jack Cook, Woods Hole Oceanographic Institution (Click image to enlarge)

In addition to studying the currents of the East China Sea, the researchers also examined the formation of internal waves—long pulses of energy created either by tidal currents or by water moving past underwater physical barriers, like a ridge or canyon on the ocean floor. “It’s similar to wind flowing over a mountain range,” says Tim Duda, a WHOI physicist who collaborated on the study.  “As water flows over undersea ridges and valleys or is pushed over the continental slope, distinct waves begin to form.”

Although these waves form deep underwater, he says, it’s still possible to track their location by looking for surface disturbances. “You can actually see where an internal wave is going by looking at the surface of the ocean,” says Duda. “The currents of the internal waves push surface waves and ripples together, forming alternating stripes of smooth and rough water that you can pick up either visually or using shipborne radar.”

Duda also measured internal waves that passed beneath the ship by using sonar to track the movement of plankton, tiny plants and animals suspended in the water. Since these organisms can’t move quickly through the ocean on their own, a passing internal wave would cause them to sink and rise in unison, revealing the wave’s shape, size, and direction of travel.

Duda says that the internal waves he observed northeast of Taiwan are extremely powerful, including one wave that measured more than 50 meters (164 feet) tall. Some of these waves, he notes, can form a solitary pulse of energy that travels for miles in deep water before dissipating. Duda dubbed these “transbasin” waves, and thinks they may play a role in mixing layers of water in the ocean, pulling nutrients from the deep up into shallower regions. His paper describing internal wave formation in the East China Sea appears in the special journal issue. 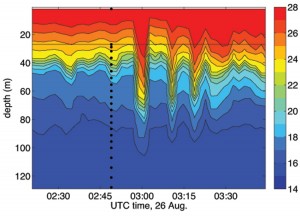 While conducting fieldwork in the region, the QPE team was also given a rare opportunity to measure changes in ocean currents caused by Typhoon Morakot. After the powerful storm passed through the region, the researchers found a strong coastal current formed and began to pull freshwater runoff from Taiwan’s coastal region into the ocean hundreds of miles north of the island. “This runoff carried pieces of wood, broken tree trunks, and even farmed freshwater fishes hundreds of miles northeast of Taiwan,” says Sen Jan of National Taiwan University, a co-Principal Investigator for QPE. “Those observations are helping provide a new perspective on the disasters that take place after a typhoon.”  The storm also drove upwelling of deep, cold water onto the continental shelf, which increased the amount of nutrients and phytoplankton after the storm.

“Thanks to global climate change, we’re seeing bigger and more powerful storms all over the world,” adds Gawarkiewicz, “and understanding exactly how they affect our oceans in the future will be important for shipping, for food production, and for basic science.”