Joe and Rika Mansueto Library appears as location in film

When the futuristic thriller Divergent started scouting locations for the film last year, Judy Hoffman saw a rare opportunity for her students.

Hoffman, professor of practice in Cinema and Media Studies, knows that a career in film requires a lot of on-the-job learning. Divergent, which is set in Chicago and was shot almost entirely in the city, would let her students see many aspects of the complicated process up close.

“The set of a studio feature offers invaluable experience in understanding the industry and craft of filmmaking,” Hoffman said.

She worked with filmmakers on two internships with the studio for the spring quarter of 2013 and into the summer. By the time the cameras started rolling, Hoffman had secured spots for fourth-year Vicente Fernandez and Stephanie Zelaya, AB’13, on the set.

“I wanted substantive internships—with someone to mentor the students and find ways for them to be involved,” Hoffman said. 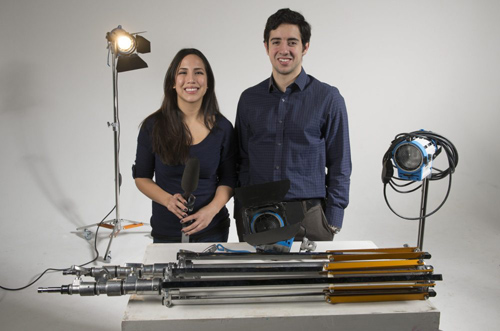 The product of their work will be visible when Divergent opens in theaters on March 21. One of the recognizable Chicago locations that made it into the film is the University of Chicago’s Joe and Rika Mansueto Library, which drew the filmmakers’ interest because of its distinctive design and futuristic glass dome.

Fernandez and Zelaya worked with everyone from the executive producer on down, keeping journals during the filming. Hoffman arranged their internships so that they were required to be on set two days a week.

Through the Chuck Roven Fund for Cinema and Media Studies, dedicated to advancing student production, Hoffman arranged for a mentor to maximize the students’ learning experience.

The mentor on set for Fernandez and Zelaya was industry professional Peter Kuttner, who has worked on numerous documentaries and feature films. He helped the students develop contacts, and met with them and Hoffman every other week to contextualize their feature film experiences and relate them to their course of study.

Both students said they saw new career paths open up and learned about the creative process in real life.

“This was an incredible opportunity to see an entirely different side of filmmaking. It added a lot to the foundation of the cinema theory that I got through my college classes,” said Fernandez.

At UChicago, Fernandez has been active in many sports, arts and media projects. He co-founded Maroon TV and has launched weekly newscasts, sports coverage and an original scripted series. For his BA thesis in Cinema and Media Studies, he is producing a short film. Fernandez also started a sports journalism aggregation site, SportsManias, which had its first million-dollar fundraising year.

“I can’t imagine getting these experiences at any other university,” he said.

Fernandez said he ultimately wants to work as a screenwriter or producer. The contacts he made on the set of Divergent have been invaluable, and he was recently invited to work on another film in Budapest this winter.

“I said I couldn’t because I have to finish school,” he said. The response, he recalled, was, “Hurry up and graduate.”

Zelaya spent much of her Divergent internship working with the art department, camera department and with the set designers. Her interest in the visual language of film was piqued, and Zelaya is now pursuing a career in cinematography.

“I got a handle on a lot of the equipment through my film production classes and in the Logan Media Center when I was still in school,” Zelaya said. “But I had no idea how big the production of a feature film would be.”

Zelaya has begun working in Chicago’s film industry since graduating with honors in Cinema and Media Studies in June 2013. She’s now supplying cameras to professional and independent filmmakers and learning more about how to use the equipment. She feels lucky to learn the ropes of a career path that often follows a zigzag rather than a straight line.

The University granted the Divergent crew permission to shoot in and outside of the Mansueto Library one day after Spring Convocation in June 2013. Based on a popular novel of the same name by Chicago author Veronica Roth, Divergent depicts a dystopian Chicago of the future, in which young people must join one of five factions.

Other feature films that have shot scenes on the University of Chicago campus include the drama Proof, based on a Pulitzer-winning play by UChicago alumnus David Auburn, AB’91. It filmed on campus over several weeks in 2003. And the 1989 romantic comedy When Harry Met Sally begins with the two main characters, both University of Chicago graduates, leaving the iconic Harper Memorial Library on a drive to New York.