The story goes that when Earth’s Van Allen Radiation Belts were first discovered, scientists were so amazed by the intensity of radiation, they thought they’d stumbled onto a Soviet nuclear test.

But they soon discovered that Earth is girdled by two concentric, doughnut-shaped regions of space, churning with radiation from protons, electrons, and other charged subatomic particles trapped in Earth’s magnetic field.

Alive with the energy pulsing through them, the Van Allen Belts change size and shape, meld into each other, and even disappear temporarily. Particles in the belts often get energized enough to move at nearly the speed of light, and when they jump to Earth’s atmosphere they produce lovely auroras. 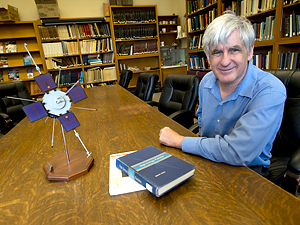 The belts’ dynamic nature fascinates scientists, but their hazards are real to satellites like the International Space Station, which carries extra shielding for its regular passes through the inner belt. The radiation intensifies when solar activity gives rise to forces that accelerate the particles. Heightened solar activity also stirs up geomagnetic storms that can knock out power grids and play havoc with GPS devices.

University of Minnesota physicists are part of a newly launched NASA mission to probe the heart of this gigantic natural laboratory. The twin spacecraft of the Radiation Belt Storm Probes (RBSP) mission will fly through the depths of the Van Allen Belts to discover where the charged particles come from, what energizes them, and how they escape from the belts.

The spacecraft were sent into orbit on a two-year mission to gather data that will deepen scientists’ understanding of how radiation belt particles become energized and aid the design of spacecraft to withstand the strongest radiation.

The U of M-led experiment, the Electric Field and Waves Suite (EFW), will study the sizes, intensities, and durations of electric fields that accelerate particles in the belts and how solar activity influences them. Such activity includes the solar wind, a stream of charged particles, or plasma, emanating from the sun at up to 2,000 kilometers per second (more than 4 million mph); and coronal mass ejections (CMEs), multibillion-ton bubbles of plasma hurled out from the sun’s corona.

University physics professor John Wygant, principal investigator for EFW, also worked on the original Geospace Mission Design Team that conceived of RBSP. He describes how particles from the sun can intensify radiation in the Van Allen Belts:

“CMEs that go faster than the solar wind—typically 1,000–2,000 kilometers per second—can produce interplanetary shock waves that deliver sharp impulses to the Van Allen Belts. They can energize particles to [near-light] speeds in 10 to 60 seconds. And if the solar wind is variable, it can jostle Earth’s magnetic field, create variation in electric fields associated with it, and accelerate particles on magnetic field lines.”

The two RBSP spacecraft are the first to explore the region of space where such activity occurs.

“We’re especially interested in periods when these acceleration processes are most powerful and the intensity of radiation increases by factors of 100 to 100,000,” Wygant says. “These periods are linked to CMEs and their associated interplanetary shocks.”

In the footsteps of a legend

James Van Allen, a University of Iowa physicist, discovered the inner belt in 1958 with a cosmic ray detector on the Explorer 1 spacecraft—NASA’s first mission. The second was found a few months later, using data from Explorer 4 and Pioneer 3. 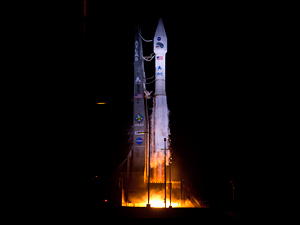 Wygant and his colleagues will compare data from the two RBSP spacecraft and from other spacecraft, such as ones that detect interplanetary shock waves.

“We can tell when a shock wave goes by and correlate [our electric field measurements] with it and with changes in magnetic fields,” says Wygant. “So we can see the geometry of shock waves and electric fields.”

By correlating data on electric fields and radiation intensities (measured by other RBSP experiments), the scientists will get a handle on what kinds of electric fields help energize the particles in the belts.

With two spacecraft, EFW can measure the sizes of electric field structures, even those thousands of kilometers wide. For example, if the leading spacecraft picks up a strong field at point A and also several thousand kilometers further along at point B, it can’t, by itself, tell if a field extends between those two points or if a field has moved from point A to point B. But if the two spacecraft pick up a field of the same intensity simultaneously at the two points, that would indicate a field extending the distance between them.

“We’ve been trying to understand how the radiation belts work since they were discovered,” says U physicist Keith Goetz, RBSP project manager. “Several key observations have been made over the years, and now RBSP will finally give definitive answers.”

“RBSP is great because it’s a rare and invaluable chance to help develop an instrument from the ground up and then watch it fly,” says graduate student Kris Kersten, whose doctoral research concerns the acceleration processes.

Many of those processes are believed to occur not only in the inner regions of Earth’s magnetic field, but also at other planets; in sudden releases of magnetic energy from the sun’s surface (solar flares ); and at more remote objects like ordinary stars; collapsed, rapidly spinning stars called pulsars; and black holes.

“Understanding the similarities and differences between how particles are accelerated at these different places is an ongoing effort for a wide range of scientists,” says Wygant.

Also working on EFW are U of M physics professor Cynthia Cattell, two graduate students, and several postdoctoral fellows, along with colleagues at the University of California, Berkeley, and the University of Colorado. The spacecraft were built at the Johns Hopkins University Applied Physics Laboratory.