AUSTIN, Texas — Homes with solar panels do not require on-site storage to reap the biggest economic and environmental benefits of solar energy, according to research from the Cockrell School of Engineering at The University of Texas at Austin. In fact, storing solar energy for nighttime use actually increases both energy consumption and emissions compared with sending excess solar energy directly to the utility grid.

In a paper published in Nature Energy on Jan. 30, researchers assessed the trade-offs of adding home energy storage to households with existing solar panels, shedding light on the benefits and drawbacks of adding storage considering today’s full energy grid mix. 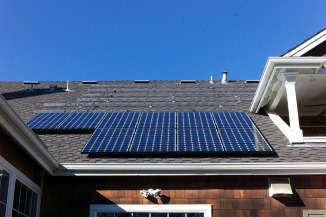 According to the Solar Energy Industry Association, the number of rooftop solar installations grew to more than 1 million U.S. households in 2016. There is a growing interest in using energy storage to capture solar energy to reduce reliance on traditional utilities. But for now, few homes have on-site storage to hold their solar energy for later use in the home.

“The good news is that storage isn’t required to make solar panels useful or cost-effective,” said co-author Michael Webber, a professor in the Department of Mechanical Engineering and deputy director of UT Austin’s Energy Institute. “This also counters the prevailing myth that storage is needed to integrate distributed solar power just because it doesn’t produce energy at night.”

Webber and co-author Robert Fares, a Cockrell School alumnus who is now an American Association for the Advancement of Science fellow at the U.S. Department of Energy, analyzed the impact of home energy storage using electricity data from almost 100 Texas households that are part of a smart grid test bed managed by Pecan Street Inc., a renewable energy and smart technology company housed at UT Austin.

They found that storing solar energy for nighttime use increases a household’s annual energy consumption — in comparison with using solar panels without storage — because storage consumes some energy every time it charges and discharges. The researchers estimated that adding energy storage to a household with solar panels increases its annual energy consumption by about 324 to 591 kilowatt-hours.

“I expected that storage would lead to an increase in energy consumption,” Fares said. “But I was surprised that the increase could be so significant — about an 8 to 14 percent increase on average over the year.”

The researchers also found that adding storage indirectly increases overall emissions of carbon dioxide, sulfur dioxide and nitrogen dioxide based on today’s Texas grid mix, which is primarily made up of fossil fuels. The increase in emissions is primarily due to the increase in energy consumption required to account for storage inefficiencies. Because storage affects what time of day a household draws electricity from the grid, it also influences emissions in that way.

If a homeowner is seeking to reduce his or her environmental footprint, adding storage would not make the household more green, but it shouldn’t be dismissed either, the researchers said.

“Solar combined with storage is still a lot cleaner than having no solar at all,” Fares said.

For utility companies, the benefits are more clear cut. Solar energy storage reduces peak grid demand by 8 to 32 percent and the magnitude of solar power injections to the grid by 5 to 42 percent. This is good for the utility because it can reduce the amount of electricity generation and delivery capacity required.

“However, if the utility is interested in reducing emissions, incentivizing home storage is probably not a good idea,” Fares said.

In short, the analysis showed that storing solar energy today offers fewer environmental benefits than just sending it straight to the grid, because the energy lost to storage inefficiencies is ultimately made up with fossil-fuel electricity from the grid. “These findings challenge the myth that storage is inherently clean, but that, in turn, offers useful insights for utility companies,” Webber said.

“If we use the storage as the means to foster the adoption of significantly more renewables that offset the dirtiest sources, then storage — done the right way and installed at large-scale — can have beneficial impacts on the grid’s emissions overall,” Webber said.

This work was funded by Pecan Street Inc., the Electric Reliability Council of Texas, and The University of Texas at Austin Energy Institute.