Part One: Focusing in on beam focus

The rapidly evolving technology of laser plasma accelerators (LPAs) – called “table-top accelerators” because their length can be measured in centimeters instead of kilometers – promises a new breed of machines, far less expensive and with far less impact on the land and the environment than today’s conventional accelerators.

Future LPAs offer not only compact high-energy colliders for fundamental physics but diminutive light sources as well. These will probe chemical reactions, from artificial photosynthesis to “green catalysis”; unique biological structures, inaccessible to other forms of microscopy yet essential to understanding life and health; and new materials, including low-temperature superconductors, topological insulators, spintronics devices, and graphene nanostructures, which will revolutionize the electronics industry. With intensely bright beams spanning the spectrum from microwaves to gamma rays, table-top accelerators will open new vistas of science. 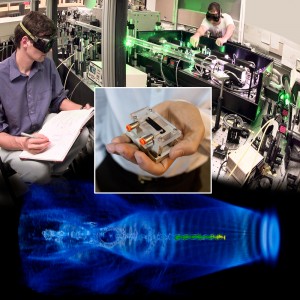 LOASIS has produced well-formed electron beams of up to a billion electron volts in laser plasma accelerators just 3.3 centimeters long. A typical laser set-up is shown above, with the billion-electron-volt accelerating module in the inset. Below, a laser wakefield accelerates a pulse of electrons (bright yellow and green) in this simulation by Cameron Geddes. (Photos Roy Kaltschmidt, Lawrence Berkeley National Laboratory.)

LOASIS, the Laser and Optical Accelerator Systems Integrated Studies program at the U.S. Department of Energy’s Lawrence Berkeley National Laboratory (Berkeley Lab), demonstrated the first LPA beams with a narrow spread of energies in 2004, and by 2006 was first to reach energies of a billion electron volts. But because of their unique method of acceleration and their pulses only femtoseconds long (mere quadrillionths of a second), testing the quality of LPA beams isn’t easy.

Wim Leemans of Berkeley Lab’s Accelerator and Fusion Research Division (AFRD) heads LOASIS, which has continued to extend and improve LPA performance with teams uniting theorists, experts in computer simulation, and gifted experimentalists – teams in which students earning their Ph.D’s are often important contributors to the work. Leemans assigned Guillaume Plateau, a graduate of the École Polytechnique near Paris (and now a postdoc at the University of California at Los Angeles) to investigate radiation associated with LPA x‑ray production as part of his dissertation.

“We had a grant to study laser plasma accelerators as x‑ray and gamma-ray light sources, and we wanted to know more about background radiation,” Leemans says. “In a serendipitous development, we found more than we had expected.”

The conventional way of accelerating charged particles like electrons is with an oscillating electromagnetic field, controlled by metal vacuum cavities that make up the segments of the accelerator. The oscillations are timed so the field pulls the electrons forward as they enter each cavity; the field strength is the “accelerating gradient,” expressed as volts (typically millions of volts) per meter. Conventional accelerators may require many segments and stretch for miles.

A laser plasma accelerator works very differently. When a powerful laser focuses a pulse on a plasma of free electrons and positive ions, its radiation pressure pushes the electrons and ions apart, creating strong accelerating gradients. Some of the electrons “surf” the resulting wave behind the pulse, in a bunch that almost instantaneously reaches near light-speed. Over short distances, LPAs have sustained accelerating gradients of hundreds of billions of volts per meter, immensely stronger than those of conventional accelerators.

“This parameter determines how well the beams can be focused,” says Cameron Geddes of LOASIS, who worked with Plateau on the experiment. “Low emittance means the velocity of the particles isn’t random – they travel nearly along streamlines.”

The LOASIS team measured the emittance of the electron beam by recording the spectrum of the x-ray pulse it emitted as the electrons accelerated, a phenomenon known as betatron radiation. The electron pulse itself (multiple pulses are shown here for clarity) is first diverted by the strong magnets of an electron spectrometer. The drive laser beam (red) is then deflected by a mirror of foils, through which the x-ray pulse (green) passes unhindered. The camera is positioned 4.7 meters away behind a window inside a vacuum chamber, surrounded by lead and plastic shielding with additional shielding from a concrete wall. Image credit: Berkeley Lab

When the experiment began, however, emittance wasn’t at the center of attention. Says Leemans, “Since we wanted to get images of the x-ray pulses associated with the electron beam, we formed a collaboration with colleagues at GSI” – Germany’s Center for Heavy Ion Research – “who came to Berkeley with an excellent commercial camera. We were impressed by what we could see, so we asked ourselves what more we could do with these images.”

Marco Battaglia of the Lab’s Engineering Division then supplied a more advanced camera, using rugged, sensitive Berkeley Lab CCDs, which yielded even better information. Says Leemans, “We were not the first to image LPA x‑rays, but because of the quality of the new cameras, we were able to measure the x-ray spectrum in detail. From that we worked backward to see what we could learn about the electron bunch.”

Geddes explains that emittance can be measured as the product of the beam size and its angle of spread (divergence). Traditional methods for measuring emittance use devices like “pepper-pots” or wire scanners, placed right in the accelerator beam – which can destroy a low-emittance beam. And with an LPA, the powerful drive laser can destroy the diagnostic devices themselves.

The LOASIS team could measure the energy and dispersion of the LPA electron bunch by deflecting it with magnets, then dumping it. But to determine emittance, they had to measure the size of the beam before it left the accelerator. X-ray spectroscopy gave them the means.

“With x-ray imaging we had a way to measure beam quality right inside the plasma, where the laser wakefield is accelerating the electron bunch,” says Geddes. That’s because the x-rays are a manifestation of what’s called betatron radiation, generated by electrons inside the accelerating “bubble” that trails immediately behind the laser pulse. As the electrons gather in the bubble they swing back and forth. This betatron oscillation emits a forward-directed throb of x-rays – tight, bright, and ultrashort.

The laser beam, the electron beam, and the x-rays all travel in the same direction. To measure the x-rays without interference, the experimenters first dumped the electron beam and then deflected the laser beam with a mirrored foil. The x-ray pulse passed through the foil to the CCD camera, which was capable of counting every x-ray photon and measuring its energy. Although the camera was almost five meters from the accelerator, the spectrum of the tight betatron pulse it captured carried the information necessary to determine the beam radius.

“By comparing their x-ray spectra to theoretical predictions, we pegged the electron beams in these experiments at a radius of 0.1 micrometer, a tenth of a millionth of meter,” Geddes says. “This is smaller than any previous experiment could resolve, allowing us to estimate the emittance across the beam – in terms of how far the momentum of the particles spreads within an angular slice of the beam – to be as low as 0.1 millimeter per thousandth of a radian.”

Geddes adds, “This transverse emittance is as good as state-of-the-art conventional accelerators for free electron lasers and gamma-ray sources, if not yet high enough for a high-energy collider. Our numerical simulations show us that emittance depends on specific ways in which the electrons are trapped in the wave, which opens the door to further reducing emittance.”

There are other measures of LPA beam quality that also depend on special radiation but leave their mark outside the accelerator. Part Two of this article, at https://newscenter.lbl.gov/feature-stories/2012/10/24/lpa-beams-part2/, investigates the phenomenon of slice-energy spread in an electron beam.