REDMOND, Wash. — Two of the biggest problems facing today’s information workers are e-mail overload and the challenge of keeping track of deliverables, their due dates and their owners. But now there’s a new collaboration software product called Liaise, from a company of the same name, that helps teams and individuals who send and receive hundreds of e-mails a day stay in control of the action items mentioned in their messages.

Designed to work seamlessly with Microsoft Outlook, Liaise uses a natural language processing engine to capture, organize and prioritize action items in both incoming and outgoing messages. Liaise doesn’t require users to change anything about the way they write e-mails. Automatically it annotates messages with five parameters: the name of the initiative, issues or actions, people responsible, due dates and level of urgency. Liaise then organizes this information into a management dashboard where users can quickly sort items, update their status, synchronize tasks and activities with other Liaise users, create management reports, and update their Outlook calendar. If an action becomes overdue, Liaise generates a notification to that effect. For team interactions that don’t occur through e-mail, users can apply the same intelligent recognition software to meeting minutes and notes from conversations, extracting action items, assignees, due dates, etc. 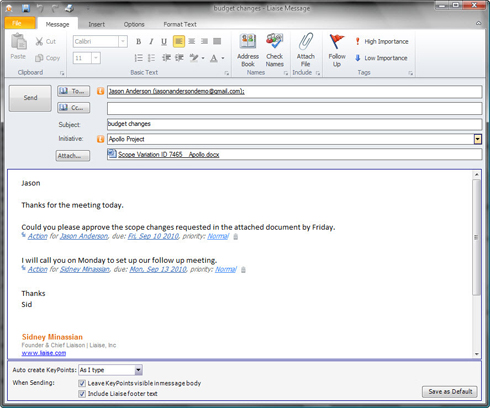 Liaise might not have reached the market without the help of a two-year-old Microsoft program called BizSpark, which helps software startups around the world succeed by giving them free access to software development tools and platforms, business and technical advice, and a connection to more than 2,500 BizSpark Network Partners, including investors, consultants, university incubators, government agencies and financial institutions. Some 35,000 companies are now enrolled in BizSpark.

“BizSpark provides entrepreneurs with access to software, technical support, business coaching, and markets and channels at a time when they need it most and can least afford it,” says Lynda Ting, BizSpark program manager at Microsoft.

In November 2009, Microsoft launched BizSpark One, an invitation-only intensive program for select BizSpark enrollees that the program’s leaders feel have the greatest potential for success and the closest alignment with Microsoft’s platforms or markets. Only about 100 businesses are invited to join the BizSpark One program.

Startups accepted into the BizSpark One program are paired with a dedicated relationship manager at Microsoft who is often both advisor and advocate to the business to help it identify its unique opportunities and expand its network of partners, investors and mentors. A key goal of the BizSpark One program is to create a community dedicated to nurturing some of the most promising startups in the Microsoft ecosystem.

“Being involved in the BizSpark One program has been tremendously helpful,” says Sidney Minassian, co-founder of Liaise. “It gave us a chance to consult with people at Microsoft who had excellent insights into our target demographic and were able to help us make strategic decisions about where to focus our limited resources. And it gave us exposure to distributors and other potential partners that a small startup like Liaise could not have easily reached without Microsoft’s endorsement.”

According to Ting, whose background is in the venture capital industry, inbox overload and e-mail anxiety are among the most pressing problems facing information workers today. “There are many startups trying to address this problem, but Liaise does so in a particularly effective way, and without requiring any behavior change on the part of users. A common reason that many startups are slow to gain traction is that their product or service requires users to change the way they do something.”

“There are all sorts of teams that form in the business world — departmental teams, cross-organizational teams, partner teams, supplier teams, and many other long-term and short-term networks of people that have to work together to get things done,” says Minassian. “E-mail drives most of those relationships these days, but e-mail isn’t designed to keep track of work flows. That’s where Liaise comes in.”

Up to 75 percent of all e-mails within a business setting contain references to one or more action items or commitments, either for the sender or the recipients, according to research conducted by Liaise. “Sorting through these and taking necessary actions can occupy the better part of each day. And it is easy and common for many of those requests and commitments to fall through the cracks,” says Minassian.

Similar to the way a spelling checker works, Liaise helps users create more effective e-mails by pointing out instances of unclear deadlines or allocation of responsibility. “One of the things that makes our software unique is that not everyone on the team needs to be using Liaise in order for individual members to use it,” says Minassian. “The person or people on the other end will simply see the e-mail message normally. And Liaise can track responses from any e-mail platform such as Gmail or Yahoo Mail, or even from mobile e-mail systems such as Blackberry and iPhone.”

The Liaise product is a hybrid, consisting of a software download that provides a management console offering a quick view of all the actions and issues that have been mentioned in e-mails, and a cloud-based service that automatically generates a message to any affected team members when the Liaise user makes a change to an action item. Minassian is quick to note that no sensitive information or e-mails are stored in the cloud, only metadata that relates to the status of action items.

Liaise is already garnering awards. When the company announced the beta of its product at last year’s DEMO Fall 2009, a premier Silicon Valley technology startup event, it won the event’s top prize — People’s Choice for Best Enterprise Product. It was the winner in the collaboration category of the Emerging Technology Awards presented by the Silicon Valley/San Jose Business Journal in December 2009. The ReadWriteWeb blog has called it “possibly the coolest e-mail add on ever,” and Gartner included it in its 2010 list of Cool Vendors in the High Performance Workplace.

Minassian sums up the value of the BizSpark program this way: “In a marketplace where IPOs are down and startup funding is hard to come by, a program like BizSpark can make all the difference for a struggling entrepreneur.”

The BizSpark program is open to privately held businesses building software-based products or services — even using open source code. They must have been in business for less than three years and have less than $1 million in annual revenues. For complete eligibility requirements, please visit www.microsoft.com/bizspark.