Stars Pop Onto the Scene in New WISE Image

PASADENA, Calif. — A new, large mosaic from NASA’s Wide-Field Infrared Survey Explorer (WISE) showcases a vast stretch of cosmic clouds bubbling with new star birth. The region — a 1,000-square-degree chunk of our Milky Way galaxy — is home to numerous star-forming clouds, where massive stars have blown out bubbles in the gas and dust.

“Massive stars sweep up and destroy their natal clouds, but they continuously spark new stars to form along the way,” said WISE Mission Scientist Dave Leisawitz of NASA Goddard Space Flight Center, Greenbelt, Md. Leisawitz is co-author of a new paper reporting the results in the Astrophysical Journal. “Occasionally a new, massive star forms, perpetuating the sequence of events and giving rise to the dazzling fireworks display seen in this WISE mosaic.”

The new image is online at: https://www.nasa.gov/mission_pages/WISE/multimedia/pia15256.html .

The WISE space telescope mapped the entire sky two times in infrared light, completing its survey in February of 2011. Astronomers studying how stars form took advantage of WISE’s all-encompassing view by studying several star-forming clouds, or nebulae, including 10 pictured in this new view. 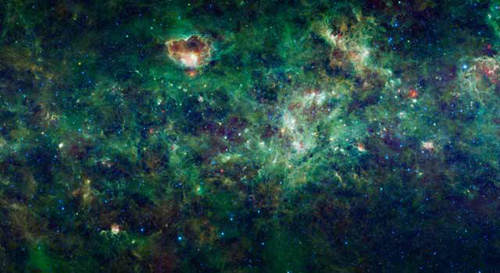 This enormous section of the Milky Way galaxy is a mosaic of images from NASA's Wide-field Infrared Survey Explorer, or WISE. The constellations Cassiopeia and Cepheus are featured in this 1,000-square degree expanse. Image credit: NASA/JPL-Caltech/UCLA

The observations provide new evidence for a process called triggered star formation, in which the winds and sizzling radiation from massive stars compress gas and dust, inducing a second generation of stars. The same winds and radiation carve out the cavities, or bubbles, seen throughout the image.

Finding evidence for triggered star formation has proved more difficult than some might think. Astronomers are not able to watch the stars grow and evolve like biologists watching zebras in the wild. Instead, they piece together a history of star formation by looking at distinct stages in the process. It’s the equivalent of observing only baby, middle-aged and elderly zebras with crude indicators of their ages. WISE is helping to fill in these gaps by providing more and more “specimens” for study.

“Each region we looked at gave us a single snapshot of star formation in progress,” said Xavier Koenig, lead author of the new study at Goddard, who presented the results today in Austin, Texas, at the 219th meeting of the American Astronomical Society. “But when we look at a whole collection of regions, we can piece together the chain of events.”

After looking at several of the star-forming nebulae, Koenig and his colleagues noticed a pattern in the spatial arrangement of newborn stars. Some were found lining the blown-out cavities, a phenomenon that had been seen before, but other new stars were seen sprinkled throughout the cavity interiors. The results suggest that stars are born in a successive fashion, one after the other, starting from a core cluster of massive stars and moving steadily outward. This lends support to the triggered star formation theory, and offers new clues about the physics of the process.

The astronomers also found evidence that the bubbles seen in the star-forming clouds can spawn new bubbles. In this scenario, a massive star blasts away surrounding material, eventually triggering the birth of another star massive enough to carve out its own bubble. A few examples of what may be first- and second-generation bubbles can be seen in the new WISE image.

“I can almost hear the stars pop and crackle,” said Leisawitz.

The complete WISE catalogue will be released to the public astronomy community in the spring of 2012.

NASA’s Jet Propulsion Laboratory, Pasadena, Calif., manages, and operated WISE for NASA’s Science Mission Directorate. The spacecraft was put into hibernation mode after it scanned the entire sky twice, completing its main objectives. Edward Wright is the principal investigator and is at UCLA. The mission was selected competitively under NASA’s Explorers Program managed by the agency’s Goddard Space Flight Center in Greenbelt, Md. The science instrument was built by the Space Dynamics Laboratory in Logan, Utah. The spacecraft was built by Ball Aerospace & Technologies Corp. in Boulder, Colo. Science operations and data processing take place at the Infrared Processing and Analysis Center at the California Institute of Technology in Pasadena. Caltech manages JPL for NASA.