The region around the center of our Milky Way galaxy glows colorfully in this new version of an image taken by NASA’s Spitzer Space Telescope.

The data were previously released as part of a long, 120-degree view of the plane our galaxy (see https://www.spitzer.caltech.edu/images/2680-ssc2008-11a-Spitzer-Finds-Clarity-in-the-Inner-Milky-Way). Now, data from the very center of that picture are being presented at a different contrast to better highlight this jam-packed region. In visible-light pictures, it is all but impossible to see the heart of our galaxy, but infrared light penetrates the shroud of dust giving us this unprecedented view.

In this Spitzer image, the myriad of stars crowding the center of our galaxy creates the blue haze that brightens towards the center of the image. The green features are from carbon-rich dust molecules, called polycyclic aromatic hydrocarbons, which are illuminated by the surrounding starlight as they swirl around the galaxy’s core. The yellow-red patches are the thermal glow from warm dust. The polycyclic aromatic hydrocarbons and dust are associated with bustling hubs of young stars. These materials, mixed with gas, are required for making new stars. 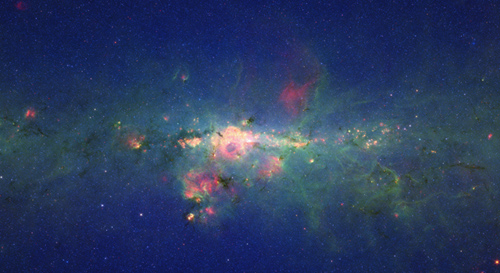 A view from the bustling center of our galactic metropolis. Spitzer Space Telescope offers us a fresh, infrared view of the frenzied scene at the center of our Milky Way, revealing what lies behind the dust. Image credit: NASA/JPL-Caltech

The brightest white feature at the center of the image is the central star cluster in our galaxy. At a distance of 26,000 light years away from Earth, it is so distant that, to Spitzer’s view, most of the light from the thousands of individual stars is blurred into a single glowing blotch. Astronomers have determined that these stars are orbiting a massive black hole that lies at the very center of the galaxy.

The region pictured here is immense, with a horizontal span of 2,400 light-years (5.3 degrees) and a vertical span of 1,360 light-years (3 degrees). Though most of the objects seen in this image are located near the galactic center, the features above and below the galactic plane tend to lie closer to Earth.