Two spacecraft are now beginning to study the moon’s environment as part of NASA’s ARTEMIS mission, whose principal investigator is Vassilis Angelopoulos, a UCLA professor of Earth and space sciences.

One of these satellites has been in the lunar environment since Aug. 25, and the second arrived Oct. 22, marking the start of the ARTEMIS mission to gather new scientific data in the sun-Earth-moon environment. 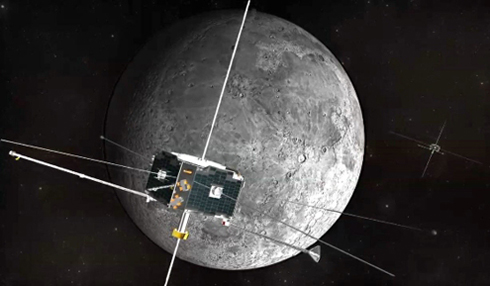 About the image: An artist’s rendering of the two ARTEMIS spacecraft in the lunar environment. Image credit: NASA/SVS

ARTEMIS is an acronym for Acceleration, Reconnection, Turbulence and Electrodynamics of the Moon’s Interaction with the Sun.

For roughly six months, the two satellites will fly in orbits behind the moon but will not orbit the moon itself. This type of orbit relies on a precise balancing of sun, Earth and moon gravity. Then, in April 2011, the spacecraft are scheduled to make elliptical orbits around the moon, each providing data every second day for several years or longer.

ARTEMIS will use simultaneous measurements of particles and electric and magnetic fields from the satellites to provide the first three-dimensional perspective of how energetic particle acceleration occurs near the moon’s orbit, in the distant magnetosphere and in the solar wind. ARTEMIS will also make unique observations of the space environment behind the dark side of the moon — the greatest known vacuum in the solar system.

“We will study the space environment around the Earth and around the moon, which are not well understood,” Angelopoulos said. “ARTEMIS will provide unprecedented data and will go where no spacecraft have gone before.

“In collaboration with NASA’s Jet Propulsion Laboratory and UC Berkeley, we are flinging the satellites into interplanetary space to the point where the Earth’s gravity and moon’s gravity are approximately equal. ARTEMIS will also provide new operational data, which will help NASA plan future moon missions. NASA engineers and mission planners will gain valuable knowledge as a result.”

ARTEMIS is an offspring of the five-satellite NASA mission known as THEMIS (Time History of Events and Macroscale Interactions during Substorms), for which Angelopoulos is also the principal investigator. ARTEMIS, which redirects two of the THEMIS satellites to the moon, will study the space environment farther from Earth than THEMIS was ever designed to do, Angelopoulos noted.

“The space environment is very different that far away from the inner magnetosphere because it is not affected much by the Earth’s strong magnetic field,” he said. “It is a pure environment in which we can understand fundamental phenomena like magnetic reconnection, particle acceleration and turbulence, which are all very hard to study in the laboratory. Magnetic reconnection, particle acceleration and turbulence are important because they are a means of converting magnetic energy into particle energy, and they operate in many other environments, such as fusion machines and distant stars.

“In astrophysics, there are many places where magnetic reconnection, particle acceleration and turbulence take place. We can infer them only from the light they produce from some of the most violent explosions that occur in the universe — from X-rays and gamma rays in pulsars, for example. Magnetic fields interact and often create, through reconnection, the expulsion of jets releasing enormous amounts of energy away from black holes, into space.

“We expect to learn fundamentally how magnetic reconnection and turbulence work in three dimensions,” he added. “We need to understand the way particle interactions with electromagnetic fields take place in that pristine region of space. ARTEMIS is uniquely instrumented to study this problem.”

The THEMIS mission has three additional satellites with electric, magnetic, ion and electron detectors that remain in carefully choreographed orbits around the Earth, as well as an array of 20 ground observatories with automated, all-sky cameras located in the northern U.S. and Canada that catch substorms as they happen.

As the THEMIS satellites are measuring the magnetic and electric fields of the plasma above Earth’s atmosphere and the ARTEMIS satellites record the distant effects of these phenomena as far as the moon, the ground-based observatories are continuing to image the auroral lights and the electrical currents in space that generate them.

THEMIS was launched Feb. 17, 2007, from Cape Canaveral, Fla., to impartially resolve the trigger mechanism of substorms. Themis was the blindfolded Greek goddess of order and justice. Artemis was the goddess of the moon in ancient Greek mythology. THEMIS and ARTEMIS are managed by the Explorers Program Office at NASA’s Goddard Space Flight Center.

Soon after their launch, the THEMIS probes discovered a cornucopia of previously unknown phenomena, including colliding auroras, magnetic spacequakes and plasma bullets shooting up and down Earth’s magnetic tail. This has allowed researchers to solve several longstanding mysteries of the aurora borealis, or “northern lights.”

In 2008, Angelopoulos and THEMIS colleagues identified the mechanism that triggers substorms in space, wreaking havoc on satellites, power grids and communications systems and leading to the explosive release of energy that causes the spectacular brightening of the aurora borealis.

For more information on the THEMIS mission, visit https://themis.ssl.berkeley.edu/ and www.nasa.gov/themis.