Songs in the key of mouse

They don’t use gondolas or croon like Sinatra. But scientists have known for a long time that male mice belt out something like love songs to females when the time seems right to them.

What they didn’t know – until a University of Delaware researcher developed a sophisticated array of microphones and a sound analysis chamber – was that female mice were singing back.

No one knows if the females are singing “It Had To Be You” or “Catch Me If You Can,” but mouse “songs” – as neuroscientist Joshua Neunuebel, assistant professor of psychological and brain sciences, calls them – apparently are quite the thing with these little rodents. 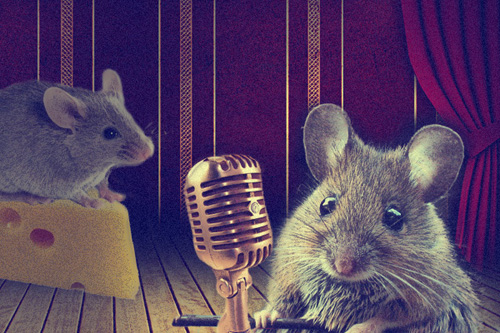 You can’t tell that a mouse is singing or shouting. There is no obvious physical sign. And their voices during these interactions register in a range far beyond the reach of human ears, Neunuebel said.

The highest range the human ear can detect is about 20 kilohertz. The high-pitched voice of a mouse registers at about 35 to 125 kilohertz, he said.

It takes special microphones to pick that up and Neunuebel and his collaborators have worked on collecting, analyzing and interpreting all sorts of mouse sounds and related data.

Neunuebel developed a sound system and analysis equations that allowed researchers to figure out – with up to 97 percent accuracy – which sound came from which mouse.

That’s when they discovered that female mice weren’t just listening to male voices. They were singing back. 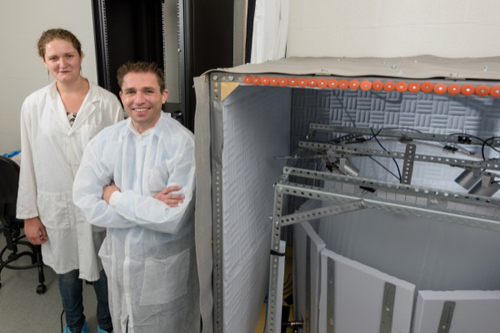 With the new sound analysis capacity – and especially the ability to pinpoint which mouse the vocals are coming from – a platform for much broader research now is available.

The work could lead to advances in understanding autism, for example, and deficits that may exist in the neural circuits of the brain that underlie social communication, Neunuebel said.

Studying mouse communication and behavior can produce great insight into brain mechanics and systems and possibly give researchers valuable insight into how human brains work.

“We are just scratching the surface,” he said.

It has been known for some time that male mice vocalize during their efforts to find a mate. Neunuebel now has demonstrated that the source of mouse songs can be pinpointed to specific mice and as part of that work subsequently demonstrated that female mice were in the vocal mix, too.

The system gathered data as four mice – two males, two females – were observed interacting and often detected vocal exchanges during chases when a male pursued a female. The data showed that females who responded vocally to a male’s “song” also slowed down, making it easier for the male to catch up to them. Unresponsive females kept up their pace.

That makes researchers think these songs may be communicating important social information – but that is another study, yet to come.

To get this data, Neunuebel and his collaborators developed a fascinating system. They rigged up an acoustically precise chamber, surrounded by foam, that had nylon mesh walls to reduce “reflections” – the phenomenon of sound bouncing around an enclosed space and off walls. They installed an array of four microphones, illuminated the chamber with infrared light, and linked each mouse to a tracking system.

They developed a calculation to divide the sound into smaller pieces and then estimated the source location for all the small pieces, correcting for delays caused by the speed of sound in air at room temperature and at standard atmospheric pressure.

They developed a theoretical grid across the floor of the chamber, spaced at a quarter of a millimeter. From each point on the grid, they calculated the estimated delay between each possible pair of microphones and used this to analyze sounds and estimate their sources.

With all of that, they produced Mouse Ultrasonic Source Estimation (MUSE) software, now available for download.

Neunuebel’s new lab at UD is looking at social communication in mouse models of autism. These mice spend 12 hours in the chamber, which is equipped with food, water and bedding, and half a terrabyte of data is collected in each 12-hour period.

To analyze that much material, Neunuebel, in his ongoing work, is taking advantage of the Farber High-Performance Computing Cluster, which speeds the analytics dramatically.

“That has been incredibly helpful,” he said. What would have taken weeks can now be done in less than a day.

“The University has put the pieces in place to make this happen,” he said.

Neunuebel earned his doctorate in neuroscience at the University of Texas Health Science Center at Houston and a postdoctoral fellowship at Howard Hughes Medical Institute at Janelia Research Campus.

The work was supported by the Howard Hughes Medical Institute and published by eLIFE sciences.