Something Odd Is Happening With Namibia’s Weather

Something’s up with the weather in Namibia, say geoscientists Kyle Nichols of Skidmore College in Saratoga Springs, N.Y., and Paul Bierman of the University of Vermont in Burlington, Vt.

Nichols and Bierman should know. They’re just back from the western mountains and coastal plain of this sparsely populated African country.

Usually, western Namibia is a dusty place where the stream beds are sand and the “lakes” are nothing more than flats of dried mud.

This year, rivers with names like Swakop and Omaruru and Kuiseb flowed all the way to the sea–something they don’t do often, “maybe once a decade,” says Bierman.

The rivers didn’t just flow for a day or two, Nichols and Bierman say, they ran from the desert to the ocean for weeks on end. 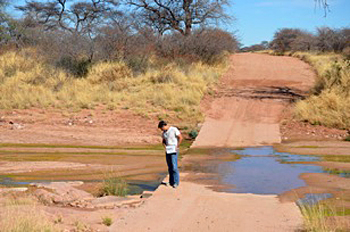 “There was so much water,” says Bierman, “that people went swimming, they went tubing, and the desert turned green around rivers carrying so much sediment they were chocolate-brown.”

The rains were unprecedented in both their intensity and duration. “There’s nothing like this widespread, heavy rain in the historic record,” says Nichols.

The two geoscientists have been working for more than a decade in Namibia, collecting samples of rock and river sediment and bringing them back for analysis at the University of Vermont (see Cosmogenic Nuclide Laboratory and Geomorphology Research Group’s website).

Their goal is to understand how quickly Namibia’s arid lands are eroding, “both the spectacular bedrock outcrops, and the landscape’s drainage basins as a whole,” says Nichols.

After the recent Namibian rains, the U.S. National Science Foundation (NSF) awarded Nichols and Bierman a rapid response grant to travel quickly back to the country last month.

Their hope is to discover whether sediment carried by rivers in such “mega-floods” is coming from sources that are the same as those when sediment is transported by more “normal” events. 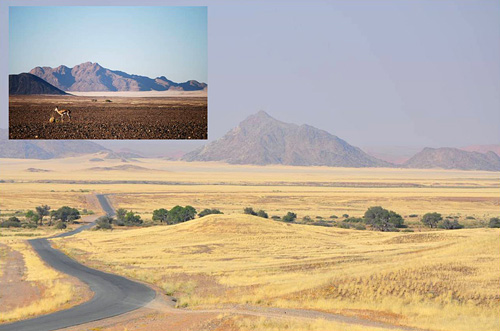 Grass now covers much of the stony desert of Namibia, where there had been no plants. Image credit: Paul Bierman, UVM

They work with collaborators at the Lawrence Livermore National Laboratory, counting rare isotopes, or sub-types, of elements formed in the mineral quartz. The results provide valuable information about the samples.

“The research focuses on the use of isotopes of the chemical elements beryllium, cesium and lead to measure erosion rates and determine sediment sources,” says Paul Cutler, program director in NSF’s Division of Earth Sciences, which awarded the grant.

“Techniques using these isotopes have become increasingly popular,” says Cutler, “as ways of finding out the sources and ages of sediments and other rock deposits.”

Bierman says that “there has been little testing of a fundamental aspect of the method, however–the similarity of isotope abundance over time. In Namibia we now have huge run-off and a chance to test this assumption of consistency.” 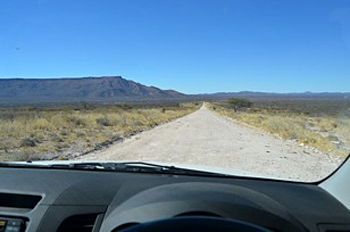 It will be months before the geologists have the first results, but the effects of the torrential rains and floods in Namibia in early 2011 are clearly evident, they say.

Grass covers what should be barren stony desert, and there is water in streams, something Nichols and Bierman haven’t seen before.

Namibia’s rains stopped months ago, but the groundwater table is so high that there is still flow in some streams and rivers.

Almost every river crossing shows the effects–logs, mud and bridges torn asunder. In some streams, the scientists saw minnows and frogs stranded in pools. “They must have been delivered during the flood,” says Bierman.

In a few places, water, road damage and stream beds laden with sediment kept the researchers from collecting samples from the exact same places as in previous years.

“The riverbed four-by-four truck tracks we needed to get to sample sites were sometimes gone,” says Bierman, “replaced by truck-sucking mud and soft sand.”

For 68 of 82 original sample sites, with the help of a GPS and maps and field notes, the scientists collected sand from within just a few meters of the original samples.

Their typical days involved getting up with the sun, says Nichols, eating a quick breakfast at a lodge, programming the GPS with the day’s route, and driving off in their diesel four-by-four truck.

One day they left the lodge at 7 a.m., drove 700 or more kilometers, and finally collected their last samples using headlamps just before 7 p.m. Then, by dark of night across deserted Namib “roads,” they drove 170 kilometers back to the lodge.

“As we were packing samples to ship home from Windhoek, Namibia’s capital,” says Bierman, “we watched the predictions as Hurricane Irene marched up the eastern U.S.”

By the time Bierman had travelled 36 hours and arrived home in Vermont, and Nichols back in upstate N.Y., the region was reeling from the worst flooding since the epic floods of November, 1927.

“This could all be coincidence, but it’s hard not to think that something’s up with the weather,” says Bierman. “A warming Earth equals a more intense hydrologic cycle, with repercussions for erosion rates, sediment redistribution and landscape evolution.”

The riverbeds of western Namibia, land of arid deserts, are awash in water.

At least for now.