Solving the mystery of the Tully Monster

The Tully Monster, an oddly configured sea creature with teeth at the end of a narrow, trunk-like extension of its head and eyes that perch on either side of a long, rigid bar, has finally been identified.

A Yale-led team of paleontologists has determined that the 300-million-year-old animal — which grew to only a foot long — was a vertebrate, with gills and a stiffened rod (or notochord) that supported its body. It is part of the same lineage as the modern lamprey.

“I was first intrigued by the mystery of the Tully Monster. With all of the exceptional fossils, we had a very clear picture of what it looked like, but no clear picture of what it was,” said Victoria McCoy, lead author of a new study in the journal Nature. McCoy conducted her research as a Yale graduate student and is now at the University of Leicester. 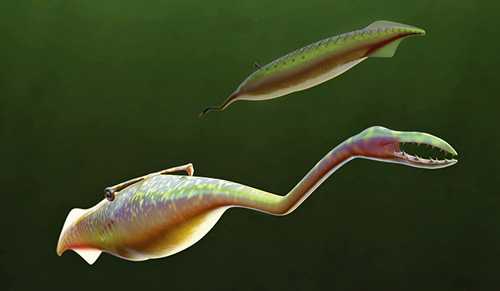 A reconstruction of the Tully Monster as it would have looked 300 million years ago, swimming in the Carboniferous seas. Notice the jointed proboscis, the multiple rows of teeth, and the dorsal eye bar. (Illustration by Sean McMahon / Yale University)

For decades, the Tully Monster has been one of the great fossil enigmas: It was discovered in 1958, first described scientifically in 1966, yet never definitively identified even to the level of phylum (that is, to one of the major groups of animals). Officially known as Tullimonstrum gregarium, it is named after Francis Tully, the amateur fossil hunter who came across it in coal mining pits in northeastern Illinois.

The Tully Monster has taken on celebrity status in Illinois. It became the state fossil in 1989, and more recently, U-Haul trucks and trailers in Illinois began featuring an image of a Tully Monster.

“Basically, nobody knew what it was,” said Derek Briggs, Yale’s G. Evelyn Hutchinson Professor of Geology and Geophysics, curator of invertebrate paleontology at the Yale Peabody Museum of Natural History, and co-author of the study. “The fossils are not easy to interpret, and they vary quite a bit. Some people thought it might be this bizarre, swimming mollusk. We decided to throw every possible analytical technique at it.” 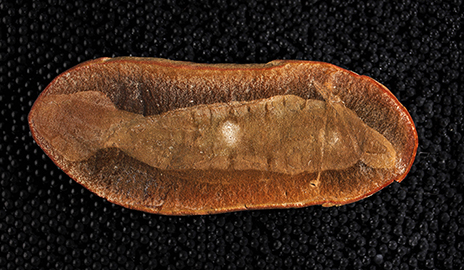 Holotype fossil of Tullimonstrum gregarium, the Tully Monster. This specimen has the best preservation of morphological features, including muscle segments in the body, the eye bar, the tail fin, and the proboscis and jaw folded back over the body. (Image by Paul Mayer / Field Museum)

Using the Field Museum’s collection of 2,000 Tully Monster specimens, the team analyzed the morphology and preservation of various features of the animal. Powerful, new analytical techniques also were brought to bear, such as synchrotron elemental mapping, which illuminates an animal’s physical features by mapping the chemistry within a fossil.

The researchers concluded that the Tully Monster had gills and a notochord, which functioned as a rudimentary spinal cord. Neither feature had been identified in the animal previously.

“It’s so different from its modern relatives that we don’t know much about how it lived,” McCoy said. “It has big eyes and lots of teeth, so it was probably a predator.”

Some key questions about Tully Monsters remain unanswered, however. No one knows when the animal first appeared on Earth or when it went extinct. Its existence in the fossil record is confined to the Illinois mining site, dating back 300 million years.

“We only have this little window,” Briggs said.