When considering whether to go solar, perhaps the most deciding factor is the cost versus the benefits of converting to solar energy. It goes without saying that solar energy will save you money, but installing a solar power system for your home isn’t exactly cheap. These benefits to installing a solar power system as well as the costs can help you to perform a cost-benefit analysis and decide whether solar energy is right for you.

Environment: Solar energy is clean, renewable, and environmentally friendly. Using solar energy instead of fossil fuel or electric from the local grid will shrink the carbon footprint of your home, reduce greenhouse emissions, and helps to keep the world a clean place for our children and our children’s children. It’s been estimated that 44% of electricity in the United States comes from burning plants, which are the primary contributor to air pollution. With global warming threatening the survival of our species, if more people were to convert to solar and other renewable energies, it would slow or even stall the progression of global warming. 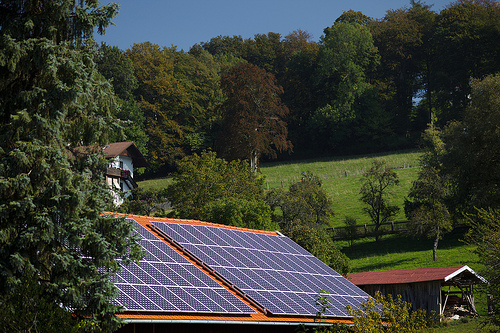 Society: According to estimates, global warming will cost the United States trillions of dollars in the next couple decades. By converting to solar energy, we’re doing our part to avert an astronomical increase in the national debt.

Savings: As you know, you could save a lot of money by installing solar photovoltaic panels on your home. A 2009 survey found that the average American household spends about $2,000 on energy costs annually; however, that figure was found using data from the preceding ten years, so you can expect that number to be much higher today due to rapidly rising energy costs. Estimates put 20-year savings from a solar energy system installed in 2011 at $20,000 in most states. In Hawaii and other states with exceptionally high energy costs, that savings could be as much as $65,000.

Security: Solar energy gives you peace of mind and security. For one thing, no one can monopolize free, renewable energy that comes from the sun. For another, solar energy means that the power outages, brownouts, and blackouts that your grid-tethered neighbors have to deal will won’t affect you because you get your energy independently from a consistent source: the sun.

The only real drawback to solar energy is the cost: Installing solar PV panels on your roof, the converter, and a battery to store power requires a bigger budget than many other home renovation projects.

There are many tools and calculators available that help you estimate the cost of installing a solar energy system for your home, but homeowners can generally expect to pay between $15,000 and $30,000 for a system that produces between 4kW and 8kW. Only about half of that cost is for the actual equipment; installation, permits, and operational costs are also a factor. However, there are many federal and state tax incentives and rebates available that lower the cost of converting to solar energy to make it a viable option for more people.