In his new book, “Get a Job: Labor Markets, Economic Opportunity, and Crime,” University of Washington sociologist Robert Crutchfield takes on the popular notion that the unemployed are more likely to commit crimes. A former juvenile probation officer and parole agent, Crutchfield explains the nuanced links between work, unemployment and crime.

Q. You write that the stratification of labor contributes significantly to a person’s lifestyle and whether or not they commit crimes. Can you explain?

A. When someone has a low-end job (what some scholars refer to as secondary sector jobs), such jobs don’t pay well, and have few or no benefits and limited prospects for the future. Young adults in that situation may feel like they don’t have to conform to society’s expectations, and are at risk of getting involved in crime because they are likely to spend time with similar young men. People with good jobs, what some scholars call primary sector jobs, by contrast have something to lose if they do not constrain their own lifestyles. So they spend less time in situations where crime might occur. The stratification of labor that I write about is the structuring of the labor market into primary sector (good) jobs and secondary sector (bad) jobs. 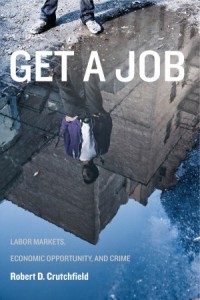 Q. Explain your contention that rejecting a so-called “slave job” – one with low wages, little future and no respect – doesn’t mean someone is unwilling to work.

A. All the evidence indicates that most people who are out of work will accept work that is offered to them. So it’s not true to say that people won’t take a “slave job” because they’re holding out for something better. People who reject a “slave job” are willing to work, but they want work that will give them a livable wage and allows them some dignity. That dignity comes from working hard and being reasonably and fairly compensated for that work.

Q. You say the general public unquestionably accepts the idea that a poor economy will lead to more crime, but that’s not always the case. Can you give some examples?

A. Well, during the Great Depression, some types of crime rates went up, like burglary, but others went down, like homicides. More recently, during the Great Recession that began in 2008, the decline in crime rates that has been going on since the 1990s has continued, even though the overall unemployment rate in the U.S. was in double digits for a time and hovered at high levels (7 to 9 percent) for several years. What happened during that time was that the overall crime rate declined (contrary to popular expectations), but in pockets within some cities there appears to have been less of a crime decline and in some other places, actual increases in offenses.

Q. When it comes to jobs and crime, what are the differences between urban and rural areas?

A. We know that there are far fewer employment options available in rural areas, but at this point the evidence is limited about what effect that has on crime and delinquency rates. And, in rural areas, without the concentration of poverty and disadvantage that exist in urban areas the negative effect of being unemployed or being in a bad job or being poor do not appear to be amplified the way it appears to be in urban disadvantaged settings.

A. Too many of the jobs that are being created in recent years are low-end, secondary sector jobs. This does not bode well for the future. The $15 minimum wage is one promising way to improve the quality of jobs, but it raises a lot of unanswered questions. Other ways to improve the job sector for everyone includes improving benefits (paid health care, sick leave and vacation), as well as job security and opportunities for advancement. We need to take seriously efforts to reverse the trend of increasing income inequality in the U.S. It is bad for individuals, bad for communities, and likely bad for the country and the U.S. economy.