Smaller is stronger for olivine

New research resolves 40 years of debate on the strength of olivine, the most abundant mineral in the Earth’s mantle

Plate tectonics, the way the Earth’s plates move apart and come back together, has been used since the 1960s to explain the location of volcanoes and earthquakes.

The study (link here) published Wednesday, Sept. 13 in the American Association for the Advancement of Science journal Science Advances, resolves 40 years of disagreement in datasets about the strength of olivine, the most abundant mineral found in the upper 250 miles or so of the Earth, known as the mantle. 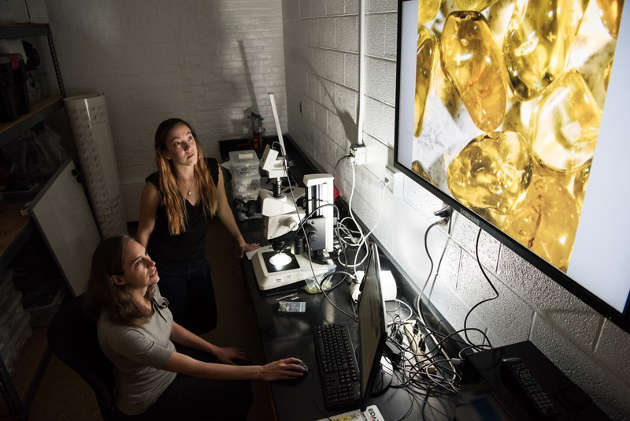 “Measuring the strength of olivine is critical to understanding how strong tectonic plates are, which, in turn, matters to how plates break and create subduction zones like those along the Cascadia plate, which runs down the west coast of Canada to the west coast of the United States,” said Warren, a geologist in the College of Earth, Ocean, and Environment. It’s also important for understanding how plates move around over the million-year time scales.

The paper demonstrated that olivine’s strength is size-sensitive and that olivine is stronger the smaller the volume that is measured, something that has been known in materials science for many metals and ceramics, but has not been studied in a geological material before.

Warren explained that the problem with studying rocks on the earth’s surface is that they are no longer subjected to the high pressures found inside the earth that cause materials to flow (like ice in a glacier). Recreating these elevated pressures in the laboratory is difficult, making it hard for scientists to study material strength in the lab.

The researchers used a technique, called instrumented nanoindentation, to measure olivine’s strength. The technique allowed them to recreate pressure conditions similar to those inside the earth by pressing a diamond tip that was carefully machined to a specific geometry into the olivine crystal to measure the material’s response. The diamond tips ranged in size from 5 to 20 microns (0.000001 meter). The researchers performed hundreds of indentation tests on tiny olivine crystals less than a centimeter square and found that the olivine crystal became weaker as the size of the diamond tip increased.

To validate this size-effect, the researchers reviewed the available literature data on the strength of olivine to determine the sizes and areas that had been tested in previous experiments dating to the late 1970s. The size-effect showed up in the old data, too.

“The reason 40 years’ worth of data don’t agree from one experiment to the next is because scientists were measuring different sizes or areas of olivine,” Warren said. “But if you plot the same information as a function of the sample size, the datasets, in fact agree, and display the same general trend — the larger the indentation in the material tested, the weaker the olivine becomes.”

Now that Warren and her colleagues understand this size-effect, they are turning their attention to how temperature affects the strength of olivine, and more broadly, on where tectonic plates might break and give rise to potential subduction zones.

Temperatures inside the earth are much hotter than on the surface and can range from 1,470 to 2,200 degrees Fahrenheit (800 to 1,200 degrees Celsius).

The team also will consider what role water plays in the structure of olivine minerals and rocks in the earth. According to Warren, current estimates suggest the earth contains the equivalent of 50 percent to 4 times the amount of water found in the global ocean.

“When geologists look at how faults buckle and deform, it is at a very small length scale where conditions in size effect really matter, just like our olivine tests in the laboratory,” Warren said. “But this size effect disappears when you get to a large enough length scale on tectonic plates, so we need to consider other things like when temperature and water begin to play a role.”