The small near-Earth asteroid 2012 DA14 will pass very close to Earth on February 15, so close that it will pass inside the ring of geosynchronous weather and communications satellites. NASA’s Near-Earth Object Program Office can accurately predict the asteroid’s path with the observations obtained, and it is therefore known that there is no chance that the asteroid might be on a collision course with Earth. Nevertheless, the flyby will provide a unique opportunity for researchers to study a near-Earth object up close.

Asteroid 2012 DA14 will be closest to Earth on Feb. 15, at about 11:24 p.m. PST (2 p.m. EST and 1924 UT), when it will be at a distance of about 27,700 kilometers (17,200 miles) above Earth’s surface. Although this is close enough for the asteroid to pass inside the ring of geosynchronous satellites, located about 35,800 kilometers (22,200 miles) above the equator, it will still be well above the vast majority of satellites, including the International Space Station. At its closest, the asteroid will be only about 1/13th of the distance to the moon. The asteroid will fly by our planet quite rapidly, at a speed of about 17,400 mph (7.8 kilometers per second) in a south-to-north direction with respect to Earth.

Even though 2012 DA14 is coming remarkably close, it will still only appear as a point of light in the biggest of optical telescopes, because of its small size. Based on its brightness, astronomers estimate that it is only about 45 meters (150 feet) across. It will brighten only to magnitude 7.5, too faint to be seen with the naked eye, but easily visible with a good set of binoculars or a small telescope. The best viewing location for the closest approach will be Indonesia, from which the asteroid will be seen to move at a rate of almost 1 degree per minute against the star background. Eastern Europe, Asia and Australia are also well situated to see the asteroid around its closest approach. But by the time Earth rotates enough for observers in the continental United States to have a chance to see the asteroid, it will have receded and faded to about the 11th magnitude. Radar astronomers plan to take images of the asteroid about eight hours after closest approach using the Goldstone antenna in California’s Mojave Desert, which is part of NASA’s Deep Space Network. 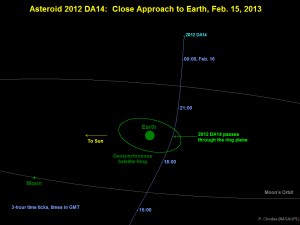 Diagram depicting the passage of asteroid 2012 DA14 through the Earth-moon system on Feb. 15, 2013. Image credit: NASA/JPL-Caltech (Click to enlarge the image)

2012 DA14 has not been in the catalogues for very long — it was discovered in February of 2012 by astronomers at the La Sagra Sky Survey program in southern Spain and reported to the Minor Planet Center, which designates minor bodies in our solar system. At the time of the discovery, the asteroid had just made a fairly distant passage by Earth, about seven times farther than the distance to the moon. Since 2012 DA14’s orbital period around the sun has been about 368 days, which is very similar to Earth’s, the asteroid made a series of annual close approaches. This year’s is the closest approach, and is the closest the asteroid will come for at least three decades. But this encounter will shorten 2012 DA14’s orbital period to about 317 days, changing its orbital class from Apollo to Aten, and its future close approaches will follow a different pattern.