15 ancient skeletons have been discovered on an archaeological dig in Ipplepen, a major Romano-British settlement in Devon and now the best preserved Roman cemetery. University of Exeter archaeologists and a team of students and volunteers uncovered the human remains during an excavation of a Roman Road and found a roadside cemetery, the like of which has never been seen in the region.

The significance of the discovery took on further importance when one of the skeletons was found to date from around 250 to 350 years after the Roman period, an era often referred to as the ‘dark ages’. These discoveries are of both national and regional value in providing a glimpse into Romano-British life and how the settlement continued into post-Roman times. 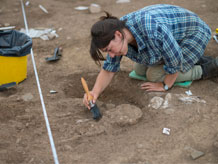 The project team are still in the early stages of analysis, and it is hoped that research will be able to provide valuable information about the life of individuals including age, diet, and disease. The team are also hoping isotope analysis will indicate the geographic origin of individuals. Stable isotopes in water are taken into tooth enamel when a person is young. As the isotope signatures in water vary geographically, it is possible to indicate where a person grew up. The team hope to be able to see if individuals are from Devon or from further reaches of the Roman Empire. Additional radiocarbon dating is also needed to help determine when the roadside cemetery first came into use.

Danielle Wootton, the Devon Finds Liaison Officer for the Portable Antiquities Scheme, based at the University of Exeter’s Archaeology Department said:“The geophysics results indicated the features were interesting, but we didn’t know what the level of preservation or the extent would be until we started excavating last summer.  As the excavation progressed, it became clear that we were dealing with the largest Romano-British cemetery discovered in Devon and that it had huge potential to develop our understanding of settlements and how people lived in the southwest 2,000 years ago. Then the radiocarbon date of AD 655 – 765 brought even further revelations; everyone was very surprised. It suggests continuation of the settlement after the Roman period and shows that life carried on at Ipplepen rather than falling out of use.”

Sam Moorhead, National Finds Adviser for Iron Age and Roman coins at the British Museum said:“We always thought that Ipplepen was special, but the excavations continue to throw up new surprises.”

Danielle Wootton added: “The site was originally discovered by Jim Wills and Dennis Hewings, who reported their metal-detected finds with the Portable Antiquities Scheme. Since then, the excavation has gone from strength to strength; it’s been great to have the support of the community; hundreds of people visited our open day last year and villagers have been fantastic.”

This summer the Ipplepen site will be excavated on 6- 31 July, providing another opportunity for archaeologists and volunteers to further explore the location where the cemetery and Roman Road were found. This year additional archaeological knowledge and expertise will be brought to the dig by University of Exeter archaeologists Dr John Davey and Professor Stephen Rippon. The project is able to offer 20 free volunteer places (five each week) to Devon residents. Excavation volunteers must be able to commit to a week and enjoy working outdoors in all weathers. There will be a site open day for visitors with guided excavation tours and opportunities to see some of the finds. Further information for the Ipplepen Field School is on the University of Exeter, Archaeology website and the date of the Open Day will be announced in the local press at the end of June.

County Archaeologist Bill Horner commented:“This is one of the most important discoveries in Devon in recent years. The concentration and range of finds and archaeological features is really exciting. It is also a very good example of how a real partnership can get so much more than just objects and reports out of archaeology. It has been great playing a part in the discovery of such a site, to work alongside the University staff and students, and British Museum experts, but it has been a real delight to see the local community embrace the project and get so hands-on in exploring their own and the county’s heritage.”

BBC 4’s Digging for Britain new series will feature the huge Roman settlement in Ipplepen and show the results of this exciting find as part of the series 3 West of England programme on Tuesday 10 February at 8pm. Archaeologists from the University of Exeter feature in the popular programme which focuses on Britain’s best excavations of 2014.

The project is supported by the University of Exeter, the Portable Antiquities Scheme, the British Museum and Devon County Council. The radiocarbon testing was generously funded by Teignbridge District Council.