The discovery of six new isotopes, reaching in an unbroken chain of decays from element 114 down to rutherfordium, is a major step toward better understanding how to explore the region of enhanced stability thought to lie in the vicinity of element 114—and possibly beyond.”

A team of scientists at the U.S. Department of Energy’s Lawrence Berkeley National Laboratory has detected six isotopes, never seen before, of the superheavy elements 104 through 114. Starting with the creation of a new isotope of the yet-to-be-named element 114, the researchers observed successive emissions of alpha particles that yielded new isotopes of copernicium (element 112), darmstadtium (element 110), hassium (element 108), seaborgium (element 106), and rutherfordium (element 104). Rutherfordium ended the chain when it decayed by spontaneous fission.

Information gained from the new isotopes will contribute to a better understanding of the theory of nuclear shell structure, which underlies predictions of an “Island of Stability,” a group of long-lasting isotopes thought to exist amidst a sea of much shorter-lived, intrinsically unstable isotopes of the superheavy elements.

The group that found the new isotopes is led by Heino Nitsche, head of the Heavy Element Nuclear and Radiochemistry Group in Berkeley Lab’s Nuclear Science Division (NSD) and professor of chemistry at the University of California at Berkeley. Ken Gregorich, a senior staff scientist in NSD, is responsible for the group’s day-to-day research operation at the 88-inch Cyclotron and the Berkeley Gas-filled Separator, the instrument used to isolate and identify the new isotopes. Paul Ellison of NSD, a graduate student in the UC Berkeley Department of Chemistry, formally proposed and managed the experiment and was first author of the paper reporting the results in the 29 October 2010 issue of Physical Review Letters, now available online to subscribers.

“We were encouraged to try creating new superheavy isotopes by accelerating calcium 48 projectiles with Berkeley Lab’s 88-Inch Cyclotron and bombarding plutonium 242 targets inside the Berkeley Gas-filled Separator here,” Nitsche says. “This was much the same set-up we used a year ago to confirm the existence of element 114.”

The 20-member team included scientists from Berkeley Lab, UC Berkeley, Lawrence Livermore National Laboratory, Germany’s GSI Helmholtz Center for Heavy Ion Research, Oregon State University, and Norway’s Institute for Energy Technology. Many of its members were also on the team that first confirmed element 114 in September of 2009. Ten years earlier scientists at the Joint Institute for Nuclear Research in Dubna, Russia, had isolated element 114 but it had not been confirmed until the Berkeley work. (Elements heavier than 114 have been seen but none have been independently confirmed.)

Nuclear stability is thought to be based in part on shell structure—a model in which protons and neutrons are arranged in increasing energy levels in the atomic nucleus. A nucleus whose outermost shell of either protons or neutrons is filled is said to be “magic” and therefore stable. The possibility of finding “magic” or “doubly magic” isotopes of superheavy elements (with both proton and neutron outer shells completely filled) led to predictions of a region of enhanced stability in the 1960s.

The challenge is to create such isotopes by bombarding target nuclei rich in protons and neutrons with a beam of projectiles having the right number of protons, and also rich in neutrons, to yield a compound nucleus with the desired properties. The targets used by the Berkeley researchers were small amounts of plutonium 242 (242Pu) mounted on the periphery of a wheel less than 10 centimeters in diameter, which was rotated to disperse the heat of the beam.

Gregorich notes that calcium 48 (48Ca), which has a doubly magic shell structure (20 protons and 28 neutrons), “is extremely rich in neutrons and can combine with plutonium”—which has 94 protons—“at relatively low energies to make compound nuclei. It’s an excellent projectile for producing compound nuclei of element 114.” 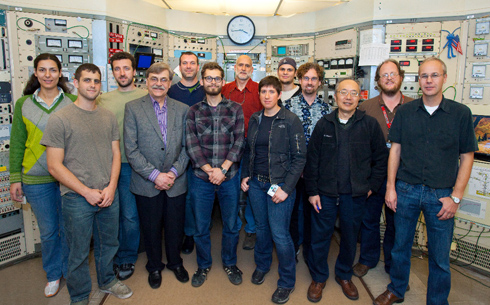 Ellison says, “There’s only a very low probability that the two isotopes will interact to form a compound nucleus. To make it happen, we need very intense beams of calcium on the target, and then we need a detector that can sift through the many unwanted reaction products to find and identify the nuclei we want by their unique decay patterns.” The 88-Inch Cyclotron’s intense ion beams and the Berkeley Gas-filled Separator, designed specifically to sweep away unwanted background and identify desired nuclear products, are especially suited to this task.

Element 114 itself was long thought to lie in the Island of Stability. Traditional models predicted that if an isotope of 114 having 184 neutrons (298114) could be made, it would be doubly magic, with both its proton and neutron shells filled, and would be expected to have an extended lifetime. The isotopes of 114 made so far have many fewer neutrons, and their half-lives are measured in seconds or fractions of a second. Moreover, modern models predict the proton magic number to be 120 or 126 protons. Therefore, where 298114 would actually fall inside the region of increased stability is now in question.

“Making 298114 probably won’t be possible until we build heavy ion accelerators capable of accelerating beams of rare projectile isotopes more intense than any we are likely to achieve in the near future,” says Nitsche. “But in the meantime we can learn much about the nuclear shell model by comparing its theoretical predictions to real observations of the isotopes we can make.”

While these times aren’t long, they’re long enough for spontaneous fission to terminate the series of alpha decays. Alpha particles have two protons and two neutrons – essentially they are helium nuclei—and many heavy nuclei commonly decay by emitting alpha particles to form atoms just two protons lighter on the chart of the nuclides. By contrast, spontaneous fission yields much lighter fragments.

So this year the Berkeley group decided to make new isotopes using a unique strategy: instead of trying to add more neutrons to 114, they would look for isotopes with fewer neutrons. Their shorter half-lives should make it possible for new isotopes to be formed by alpha emission before spontaneous fission interrupted the process.

“This was a very deliberate strategy,” says Ellison, “because we hoped to track the isotopes that resulted from subsequent alpha decays farther down into the main body of the chart of nuclides, where the relationships among isotope number, shell structure, and stability are better understood. Through this connection, and by observing the energy of the alpha decays, we could hope to learn something about the accuracy of predictions of the shell structure of the heaviest elements.”

The sum of protons and neutrons of  48Ca and 242Pu is 114 protons and 176 neutrons. To make the desired “neutron poor”  285114 nucleus, one having only 171 neutrons, first required a beam of  48Ca projectiles whose energy was carefully adjusted to excite the resulting compound nucleus enough for five neutrons to “evaporate.”

“The process of identifying what you’ve made comes down to tracking the time between decays and decay energies,” says Ellison. As a check against possible mistakes, the data from the experiment were independently analyzed using separate programs devised by Ellison, Gregorich, and team member Jacklyn Gates of NSD.

In this way, after more than three weeks of running the beam, the researchers observed one chain of decays from the desired neutron-light 114 nucleus. The first two new isotopes, 285114 itself, and copernicium 281 produced by its alpha decay, lived less than a fifth of a second before emitting alpha particles. The third new isotope, darmstadtium 277, lived a mere eight-thousandths of second. Hassium 273 lasted a third of a second. Seaborgium 269 made it to three minutes and five seconds but managed to emit an alpha particle. Finally, after another two and a half minutes, rutherfordium 265 decayed by spontaneous fission.

Ellison says, “In the grand scheme, the theoretical predictions were pretty good” when the actual measurements were compared to the decay properties predicted by modern nuclear models. “But there were small-scale interesting differences.”

In particular, the heaviest new isotopes, those of 114 and copernicium, showed smaller energies associated with the alpha decay than theory predicts. These discrepancies can be used to refine the theoretical models used to predict the stability of the superheavy elements.

As Gregorich puts it, “our new isotopes are on the western shore of the Island of Stability”—the shore that’s less stable, not more. Yet the discovery of six new isotopes, reaching in an unbroken chain of decays from element 114 down to rutherfordium, is a major step toward better understanding the theory underlying exploration of the region of enhanced stability that is thought to lie in the vicinity of element 114—and possibly beyond.