In the wake of the announcement that Provost Peter Salovey has been named as Yale’s 23rd president (see YaleNews story), here is a look at how he fits in with his presidential predecessors.

• He will be the third psychologist to hold Yale’s top administrative post.

Noah Porter, president 1871-1886, was an early figure in the development of American psychology. His book “The Human Intellect,” which features an “Introduction upon Psychology and the Human Soul” (1868), explored the tensions between religious belief and “scientific” psychology.

John Rowland Angell, president 1921-1937, was a proponent of the field of functional psychology, which held that the purpose of consciousness is to improve an organism’s adaptive abilities.

Salovey’s own research focuses on the ways that human moods and emotions affect behavior and decision-making, with an emphasis on applying psychological principles to motivate people to adopt behaviors to protect their health. 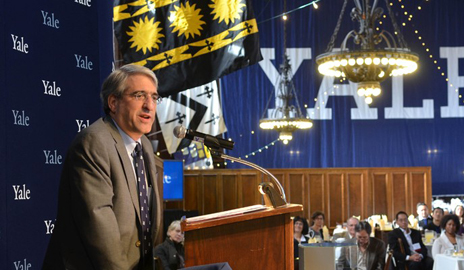 Peter Salovey will be the only Yale president to have served as head of an academic department, Yale College dean, Graduate School dean, and provost. (Photo by Michael Marsland)

• He will be the second Stanford University alumnus to serve as Yale president.

Like his predecessor, Richard C. Levin, Salovey earned his undergraduate degree at the California university and his doctorate at Yale — although over a decade later.

A side note: One Yale alumnus has served as president of Stanford: Gerhard Casper ’62 J.D., who headed the California university 1992-2000.

• He will be the third provost tapped to become Yale president.

• He will be the fifth consecutive Yale provost to be chosen to lead a major university.

In fact, it was Salovey’s own doctoral adviser, Judith Rodin, who started this trend. Rodin was serving as Yale provost (1992-1994) when she was selected as the University of Pennsylvania’s president, making her the first permanent female president of an Ivy League institution.

• He will be the third Yale president to have been dean of the Graduate School.

• And he will be only the second Yale president who also served as dean of Yale College.