“Simming” a mile in others’ shoes

Scott Magelssen has had more lives than an accident-prone cat. He’s been a waiter in a logging camp. An anthrax victim. A Mexican migrant trying to cross into the U.S. A slave seeking freedom on the Underground Railroad. An observer during an attack on an Iraqi village.

It’s all in a day’s work for Magelssen, a UW associate professor of drama, who has participated in a variety of interactive simulations for his upcoming book, “Simming” to be published in June by University of Michigan Press. The book explores the impact of simulations and the potential of such immersive environments to promote social change.

Magelssen’s interest in simulations dates back to his teenage years in Wisconsin, where he worked as a lumberjack waiter at Historyland, a tourist venue that celebrated the glory days of Wisconsin logging. Later on, he started collecting examples of simulations.

“I wound up having so many examples that I saw the potential for a book about the many ways that educators and industry and businesses and tourist attractions use simulations,” he said. “They employ similar strategies for very different purposes.” 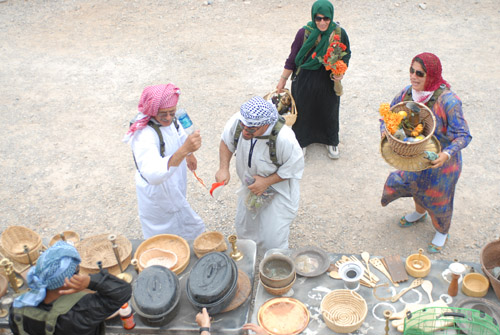 To research the book, Magelssen participated in or observed more than a dozen simulations. There were simulations of aging for empathy training of health care workers; a large-scale simulation of an anthrax attack to prepare for disaster response; and the simulated aftermath of a drunk-driving crash to discourage teenage drinking. A simulation designed to prepare soldiers for the Middle East recreates an entire Iraqi province in the California desert, with hundreds of Iraqi Americans posing as Iraqi civic leaders, police, schoolteachers, and other citizens.

The most intense simulation Magelssen has personally experienced was in Mexico, three hours north of Mexico City. Actors led participants through a grueling six-hour simulation of an illegal border crossing from Mexico into the U.S. The event takes place at night, with participants running from (simulated) U.S. Border Patrol police, down steep hills into the muck of the riverbeds, losing shoes and dodging prickly cacti. It is designed for Mexican tourists, both to generate revenue for the town that hosts it and to discourage Mexicans from attempting to cross the border.

Magelssen is quick to acknowledge that simulations, particularly those that place privileged visitors in the role of society’s downtrodden, tread sensitive territory. “On the one hand, it’s arrogant to assume that we can step into the shoes of someone who has suffered in the past. On the other, what kind of people are we if we only stick to bodily experiencing our own localized history, our own ethnic and cultural identity?”

He hopes that his book helps people talk about the difficult issues that arise from when one has “that bodily difference that complicates and adds nuance to one’s experience of history.”