WASHINGTON — Large changes in the Sun’s energy output may cause Earth’s outer atmosphere to contract, new research indicates. A study published today by the American Geophysical Union links a recent, temporary shrinking of a high atmospheric layer with a sharp drop in the Sun’s ultraviolet radiation levels.

The research indicates that the Sun’s magnetic cycle, which produces differing numbers of sunspots over an approximately 11-year cycle, may vary more than previously thought.

“Our work demonstrates that the solar cycle not only varies on the typical 11-year time scale, but also can vary from one solar minimum to another,” says lead author Stanley Solomon, a scientist at the National Center for Atmospheric Research’s High Altitude Observatory. “All solar minima are not equal.” Researchers from the University of Colorado at Boulder (CU) also contributed to the project.

The findings may have implications for orbiting satellites, as well as for the International Space Station. The fact that the layer in the upper atmosphere known as the thermosphere is shrunken and less dense means that satellites can more easily maintain their orbits. But it also indicates that space debris and other objects that pose hazards may persist longer in the thermosphere.

“With lower thermospheric density, our satellites will have a longer life in orbit,” says CU professor Thomas Woods, a co-author. “This is good news for those satellites that are actually operating, but it is also bad because of the thousands of non-operating objects remaining in space that could potentially have collisions with our working satellites.” 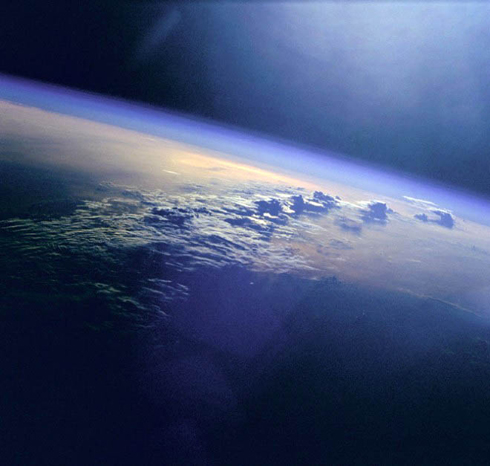 About the image: Large changes in the sun’s energy output may drive fluctuations in Earth’s outer atmosphere. Results of a study link a recent, temporary shrinking of a high atmospheric layer with a sharp drop in the sun’s ultraviolet radiation levels. Image credit: NASA

The Sun’s energy output declined to unusually low levels from 2007 to 2009, a particularly prolonged solar minimum during which there were virtually no sunspots or solar storms. During that same period of low solar activity, Earth’s thermosphere shrank more than at any time in the 43-year era of space exploration.

The thermosphere, which ranges in altitude from about 90 to 500 kilometers (55 to more than 300 miles), is a rarified layer of gas at the edge of space where the Sun’s radiation first makes contact with Earth’s atmosphere. It typically cools and becomes less dense during low solar activity. But the magnitude of the density change during the recent solar minimum appeared to be about 30 percent greater than would have been expected by low solar activity.

The study team used computer modeling to analyze two possible factors implicated in the mystery of the shrinking thermosphere. They simulated both the impacts of solar output and the role of carbon dioxide, a potent greenhouse gas that, according to past estimates, is reducing the density of the outer atmosphere by about 2 percent to 5 percent per decade.

Their work built on several recent studies. Earlier this year, a team of scientists from the Naval Research Laboratory and George Mason University, measuring changes in satellite drag, estimated that the density of the thermosphere declined from 2007–2009 to about 30 percent less than that observed during the previous solar minimum in 1996. Other studies by scientists at the University of Southern California and CU, using measurements from sub-orbital rocket flights and space-based instruments, have estimated that levels of extreme-ultraviolet radiation—a class of photons with extremely short wavelengths—dropped about 15 percent during the same period.

However, scientists remained uncertain whether the decline in extreme-ultraviolet radiation would be sufficient to have such a dramatic impact on the thermosphere, even when combined with the effects of carbon dioxide.

To answer this question, Solomon and his colleagues used a computer model to simulate how the Sun’s output during 1996 and 2008 would affect the temperature and density of the thermosphere. They also created two simulations of thermospheric conditions in 2008—one with a level that approximated actual carbon dioxide emissions and one with a fixed, lower level.

“It is now clear that the record low temperature and density were primarily caused by unusually low levels of solar radiation at the extreme-ultraviolet level,” Solomon says.

Woods says the research indicates that the Sun could be going through a period of relatively low activity, similar to periods in the early 19th and 20th centuries. This could mean that solar output may remain at a low level for the near future.

“If it is indeed similar to certain patterns in the past, then we expect to have low solar cycles for the next 10 to 30 years,” Woods says.

The study, published in Geophysical Research Letters, was funded by NASA and by the National Science Foundation.