An article written by Robert J. Shiller, the Arthur M. Okun Professor of Economics, was recently named one of the “top 20” articles in the 100-year history of the American Economic Review (AER), the premier journal in the field of economics.

“Do Stock Prices Move Too Much to Be Justified by Subsequent Changes in Dividends?” was published in the June 1981 edition of the AER and became a focal point of debate and research over the question of whether changes in stock market prices are driven by rational expectations — what’s called the efficient markets hypothesis — or by other forces. 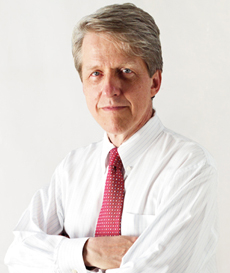 Shiller’s paper was a founding moment for behavioral finance, a field that has become increasingly influential in the years since, notes Nicholas C. Barberis, the Stephen & Camille Schramm Professor of Finance at Yale SOM. “I think of it as the first serious behavioral finance paper of the modern era,” he says. “It was the first to make a serious case that stock market prices are affected by irrational thinking.”

Shiller argued in his 1981 paper that stock prices had historically been more volatile than would be expected if investors were strictly rational. He compared actual movements in stock prices with subsequent changes in dividends and found that prices were far more volatile than could be justified based on any rational forecast of future dividends. In other words, periods of very high stock prices were not necessarily followed by periods of high corporate earnings and high dividends, as would be expected if investors were fully rational.

“It’s a very practical argument,” says Barberis, “because again and again when the market goes up, people have tried to rationalize it by saying that earnings will be high, that this time is different-whether because of changes in technology or changes in business practices. But Shiller shows that that hasn’t been the case in the past. It’s a crucial point that comes through in a lot of his research over the years.”

Shiller is widely known for correctly declaring that stocks were overpriced during the dot-com bubble and the more recent housing bubble. His highly influential book Irrational Exuberance, which analyzed speculative bubbles, was published in 2000, just as the technology-fueled bubble peaked; it became a best seller. He also cofounded the S&P/Case Shiller Index, which tracks house prices across the country, and has written about the subprime crisis and how to prevent future crises in the housing market. A prominent theme in his research and in his work has been how to use the tools of financial innovation to provide greater security to ordinary consumers.

“Shiller’s paper caused an immense furor in the finance profession,” says Barberis. “It’s only a small exaggeration to say that most of the 1980s was spent debating it. While some have proposed rational explanations for these phenomena, I think there’s no doubt that in the process of trying to understand Shiller’s work, we’ve learned a lot about finance.”

For links to the AER article and a Q&A with Shiller, click here.