Fleda Brown, professor emerita of English and former poet laureate of Delaware, may have retired from the University of Delaware in 2007, but when she spoke on campus this week, she sounded at least as busy as any other working writer.

At the event in Memorial Hall — her third consecutive day of public appearances in the state — Brown read from her newest collection of poems, No Need of Sympathy, and mentioned some of her numerous activities in and around her home in Traverse City, Michigan. In addition to the poetry book, her eighth published collection, she also described writing poems for a Hemingway festival to which she was invited and for an exhibition in which she collaborated with a sculptor.

Brown also writes a column each month for a Traverse City newspaper and reviews new books of poetry on a monthly public radio broadcast. She has been writing a blog about her life and work for a few years and is currently at work on compiling those essays into a book. 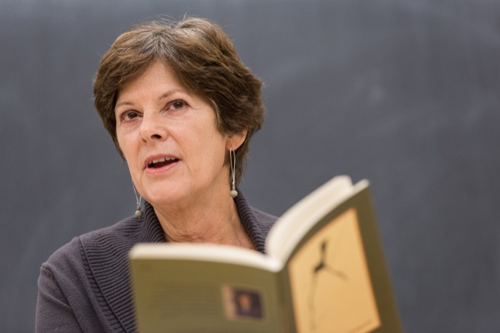 Fleda Brown, professor emerita of English, returned to campus to give a reading from her newest collection of poetry. Photo by Evan Krape

She has written that the book, tentatively titled My Wobbly Bicycle: A Poet’s Guide to Cancer, Writing, and Meditation, will encompass her blog posts from “my first announcement of my cancer diagnosis to the most recent when I say I’m basically living a normal life, again.”

At her appearance at UD, she read two poems related to her illness, “Getting the News” and “Cancer Support Group with Painting by Monet,” and several from No Need of Sympathy, including “Sugar, Sugar,” “Venus de Milo” and “My Father and Hemingway Go Fishing.” The poetry in the book consists of a variety of forms, including a series of 10 sonnets, each written specifically for one of her 10 grandchildren.

Her books always include a story, she said, before reading “Hare’s Breath,” which she told the audience is about “two Ph.D.’s trying to change the innards of a toilet. We won’t say who they are.” Her husband, Jerry Beasley, also a UD professor emeritus of English, attended the reading.

Here is an excerpt from “Hare’s Breath,” which also explores the “long messed up” metaphors of “a hair’s breadth, or hare’s breath, or hair’s breath”:

… I ask you, what volume can a hare breathe,

is a hair? Furthermore, by what tiny margin

did the quarks and leptons have to increase

win out over anti-matter, to bring us here,

to the flushing of toilets, filling of tanks?

In her introduction before the reading, Devon Miller-Duncan, instructor in English, quoted Brown from an earlier interview, in which she expressed the hope that the poems in No Need of Sympathy are “fastened to the earth but strain at their leashes.”

“There’s always a story lurking,” she said in that interview. “Our brains can’t wait to find it, right?” 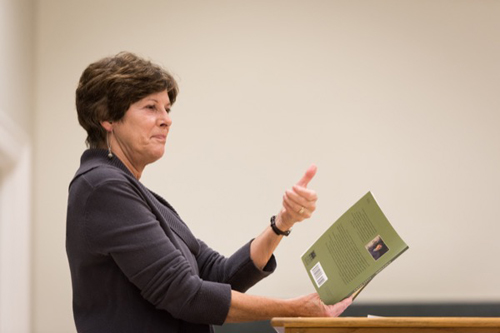 Fleda Brown, professor emerita of English, returned to campus to give a reading from her newest collection of poetry. Photo by Evan Krape

Brown, who was a UD faculty member for 27 years, directed the Poets in the Schools program in Delaware and was the state poet laureate from 2001-07. She has received numerous honors for her work, including the Felix Pollak Prize, the Philip Levine Prize, the Great Lakes Colleges New Writer’s Award and the New Letters and the Ohio State University/The Journal awards for creative nonfiction.