A coating of selenium nanoparticles significantly reduces the growth of Staphylococcus aureus on polycarbonate, a material common in implanted devices such as catheters and endotracheal tubes, engineers at Brown University report in a new study.

PROVIDENCE, R.I. [Brown University] — Selenium is an inexpensive element that naturally belongs in the body. It is also known to combat bacteria. Still, it had not been tried as an antibiotic coating on a medical device material. In a new study, Brown University engineers report that when they used selenium nanoparticles to coat polycarbonate, the material of catheters and endotracheal tubes, the results were significant reductions in cultured populations of Staphylococcus aureus bacteria, sometimes by as much as 90 percent.

“We want to keep the bacteria from generating a biofilm,” said Thomas Webster, professor of engineering and orthopaedics, who studies how nanotechnology can improve medical implants. He is the senior author of the paper, published online this week in the Journal of Biomedical Materials Research A.

Biofilms are notoriously tough colonies of bacteria to treat because they are often able to resist antibiotic drugs.

“The longer we can delay or inhibit completely the formation of these colonies, the more likely your immune system will clear them,” Webster said. “Putting selenium on there could buy more time to keep an endotracheal tube in a patient.”

Meanwhile, Webster said, because selenium is actually a recommended nutrient, it should be harmless in the body at the concentrations found in the coatings. Also, it is much less expensive than silver, a less biocompatible material that is the current state of the art for antibacterial medical device coatings.

Webster has been investigating selenium nanoparticles for years, mostly for their possible anticancer effects. As he began to look at their antibiotic properties, he consulted with Hasbro Children’s Hospital pediatrician Keiko Tarquinio, assistant professor of pediatrics, who has been eager to find ways to reduce biofilms on implants. 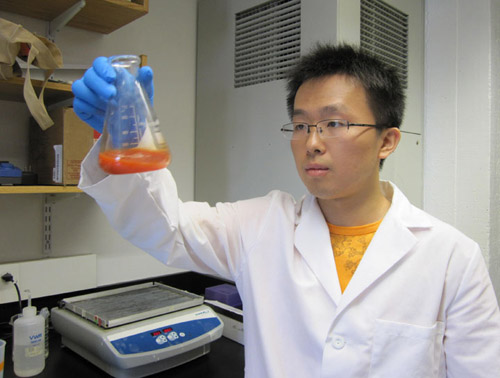 For this study, Webster and first author Qi Wang grew selenium nanoparticles of two different size ranges and then used solutions of them to coat pieces of polycarbonate using a quick, simple process. On some of the polycarbonate, they then applied and ripped off tape not only to test the durability of the coatings but also to see how a degraded concentration of selenium would perform against bacteria.

On coated polycarbonate — both the originally coated and the tape-tested pieces — Wang and Webster used electron and atomic force microscopes to measure the concentration of nanoparticles and how much surface area of selenium was exposed to interact with bacteria.

One of their findings was that after the tape test, smaller nanoparticles adhered better to the polycarbonate than larger ones.

Then they were ready for the key step: experiments that exposed cultured staph bacteria to polycarbonate pieces, some of which were left uncoated as controls. Among the coated pieces, some had the larger nanoparticles and some had the smaller ones. Some from each of those groups had been degraded by the tape, and others had not.

All four types of selenium coatings proved effective in reducing staph populations after 24, 48, and 72 hours compared to the uncoated controls. The most potent effects — reductions larger than 90 percent after 24 hours and as much as 85 percent after 72 hours — came from coatings of either particle size range that had not been degraded by the tape. Among those coatings that had been subjected to the tape test, the smaller nanoparticle coatings proved more effective.

Staph populations exposed to any of the coated polycarbonate pieces peaked at the 48-hour timeframe, perhaps because that is when the bacteria could take fullest advantage of the in vitro culture medium. But levels always fell back dramatically by 72 hours.

The next step, Webster said, is to begin testing in animals. Such in vivo experiments, he said, will test the selenium coatings in a context where the bacteria have more available food but will also face an immune system response.

The results may ultimately have commercial relevance. Former graduate students developed a business plan for the selenium nanoparticle coatings while in school and have since licensed the technology from Brown for their company, Axena Technologies.

The Hermann Foundation funded the research.