Radioactive medicine being tracked through rivers

A University of Delaware oceanographer has stumbled upon an unusual aid for studying local waterways: radioactive iodine. Trace amounts of the contaminant, which is used in medical treatments, are entering waterways via wastewater treatment systems and providing a new way to track where and how substances travel through rivers to the ocean.

“This is a really interesting convergence of medicine, public health and environmental science,” said Christopher Sommerfield, associate professor of oceanography in UD’s College of Earth, Ocean, and Environment.

Sommerfield found small quantities of radioactive iodine, also called radioiodine or I-131, by accident while sampling the Delaware River, the main source of freshwater to Delaware Bay. The amounts were at low concentrations that do not pose a threat to humans or the environment, according to the Environmental Protection Agency (EPA).

Sommerfield measures naturally occurring radionuclides, variants of elements emitting radiation, that attach to mud particles carried along by water. The work is part of his research on how river sediments move through estuaries to the coastal ocean and influence the sea floor and coast.

When I-131 showed up in his samples, he thought it was a mistake. 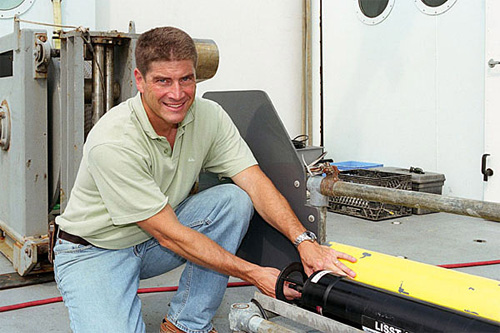 Chris Sommerfield is tracking radioactive iodine, used in medical treatments, through waterways to learn how substances travel along rivers to the ocean. Photo by Bob Bowden

“I-131 is a man-made radionuclide produced in nuclear reactors, so when we first detected it my heart skipped a beat,” Sommerfield said. “However, after further research and consultation with government experts, I realized that it was I-131 waste from thyroid cancer treatments.”

Therapeutic I-131 administered at hospitals enters urban sewage after thyroid cancer patients return home and excrete the medicine. Last summer the Philadelphia Water Department discovered extremely low levels of I-131 in the Schuylkill River, which serves as a drinking water source for the city, in samples collected following the Fukushima nuclear disaster in Japan.

The department determined that the substance was coming from local medical treatments. Like the amounts Sommerfield found throughout the Delaware Estuary around the same time, the levels were well below the maximum accepted level set by the EPA, which periodically monitors I-131 at a limited number of sites.

Sommerfield shared his findings with Philadelphia and Delaware officials, who continue to examine the situation. He discovered that the highest I-131 concentrations were present in the highly urbanized section of the Delaware River, which receives a large amount of treated wastewater from municipalities, and that levels steadily decreased downstream to zero in Delaware Bay.

I-131 has a half-life of eight days, meaning its radioactivity decreases by half during that time period as it transforms to non-radioactive elements. Sommerfield was unable to find much information about the fate of I-131 in coastal waterways.

“There are only a few recent research papers documenting the behavior I-131 in rivers and estuaries worldwide, and nothing for Delaware,” he said.

Sommerfield recently shared his experience at the international Ocean Sciences Meeting in Utah, where fellow researchers were interested in learning more about how I-131 could be used as a water and sediment tracer. Radionuclides help oceanographers study transport processes in estuaries and coastal waters, and I-131 has the potential to fill a void among natural and man-made radionuclides that are typically measured because it has a very short half-life and comes from a specific source.

“Wastewater-derived I-131 provides a tool to better understand how estuaries disperse water and suspended particles,” Sommerfield said. “With further research, we expect to learn more about how sediment from the Delaware River is delivered to the estuary and fringing tidal marshlands, which require muddy sediments for nutrients and stability.”

This research is funded by the National Science Foundation and Delaware Sea Grant.